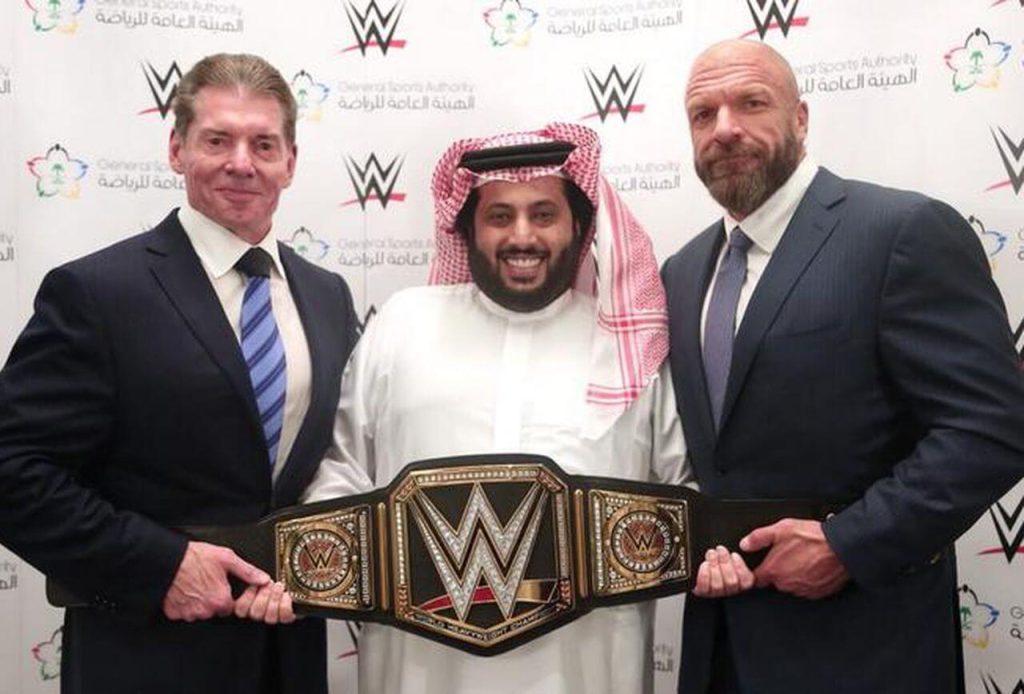 WWE's last international venture, entitled WWE Super Show-Down, emanated from Australia on in the early hours of Saturday morning (5:00 am on the East Coast, to be exact). Superstars of past, present and tomorrow were in action or at least appeared in the land down under as WWE continues its aggressive efforts to tap directly into international markets, via leveraging the reach of the WWE Network. Of course there's great revenue advantages with this strategy and the potential for finding new talent, however, with the largest WWE fan base existing in North America, do these shows do more damage than further growth? Some would argue the WWE sacrifices its morals for a quick buck, others say it's a calculated gamble with odds working in WWE's favor.

Here's a look at the ups and downs of the WWE's new wide-spanning approach:

The advantages for one-off shows like Super Show-Down and November's Saudi Arabia-based Crown Jewel is obviously, the money. WWE will profit from the fans in another country, as well as the network buys from around the globe. The WWE will not change its methods despite the criticism it receives. If it makes dollars it makes sense in that regard. In addition to net profit, the company benefits from the exposure in new markets. When WWE shows up, an entire landscape is changed. From autograph signings to dark matches outside of the event, the company does a good job at drawing in casual fans. There's great benefit from creating a presence in new markets that could facilitate partnerships down the road. It's possible that Wrestlemania could take place in another country some day. The WWE also scours the world for new athletes of various descents. The company held tryouts in Saudi Arabia during the Greatest Royal Rumble earlier this year and signed some to contracts.

The benefits that move the company's bottom line are not without flaw. The WWE treats these events as they would a marquee pay-per-view. Rightfully so when presenting to a new audience. However, a ton of criticism comes with that presentation itself as these shows tend to feel like a glorified live show. Typically titles don't change hands and there are no surprises for 5+ hours of viewing. In fact, only the Cruiserweight title changed hands at Super Showdown and only because Buddy Murphy is from Melbourne, Australia. The Greatest Royal Rumble was criminal of that on top of alienating the women of WWE. The outrage was real when women were informed they couldn't participate nor travel to Saudi Arabia. Overall just a bad look for the company during the women's revolution. The WWE has shown more efforts to promote these shows other than its very first all womens ppv Evolution. So much so they threw over a dozen of the company's top performers in another battle royal. That type of lazy storyline development deserves every piece of backlash coming its way.

Another glaring weakness is the need for legends to be included to get the show over. Undertaker, Triple H , Brock Lesnar and John Cena can hardly be considered part-timers any longer, yet they all are participating. Nostalgia acts are always a good time but not when they headline your event, as it takes away from the workhorses who move the product year round. If these superstars can't headline in new markets now, when will they ever be? Super Showdown gave a premier feud with Daniel Bryan and the Miz only 5 minutes. Just to allow Undertaker and Triple H to go the distance in a feud that is meaningless in today's landscape. Undertaker vs Triple H 2 was the end of an era at Wrestlemania 28. But in Melbourne, Australia they were billed again for the last time ever. What exactly does this accomplish for the Raw and Smackdown brands moving forward? The silver lining in the result is the return of Shawn Michaels announcing he is coming out of retirement. Yet, and still this is on the heels of pushing a nostalgia act over the main roster in front of a new audience. Without progression into the active product, these events look like nothing more than a cash grab.

The WWE always wins because fans will continue to watch the product. Ratings have been up and down for some time. However, media is consumed by more than just television and viewership on the network and WWE.com website continues to rise. The company stands to profit from these events and there's no end in sight for them to exist at some capacity. Even with the pressure to cancel Crown Jewel, the company hasn't backed off hosting the event. Risking alienating themselves from their home country and some WWE stars have cited there's more use in going rather than not. While hardcore fans can see right through the hustle, they all will tune in. In all likelihood, they'll also find something from the show that exceeded their expectations.