WHOOOOOOOO!!!!!!! I’m literally minutes removed from watching WrestleMania 28, and I must say, I am pleasantly surprised. Any time there’s this much hype for an event, the only thing you don’t want to have happen is for it to suck. The 78,000 in attendance at Miami’s Sun Life Stadium filed in with expectations of a blow-away show, and that’s exactly what they got.

We saw two title changes as Daniel Bryan got kicked into the fifth row before the match even got started, as Sheamus became the new World Heavyweight Champion. The Big Show also got his just due, as he disposed of Cody Rhodes for the Intercontinental Cahmpionship.

The “End Of An Era” match between The Undertaker and HHH was every bit of the classic dramatic brawl from three of the greatest superstars of all time that people expected. It was theatre at its sports entertainment best, and it reminded you why you even started watching WWE in the first place. After numerous peaks, valleys and a sweet chin music, The Undertaker stood triumphant over HHH to bring his WrestleMania record to a nice, clean 20-0.

For the “workrate” “technical” fan, the WWE Championship match between “YM”CM Punk and Y2J Chris Jericho was a pure wrestling fan’s dream. These men let it all hang out for 25-30 minutes as they put on a wrestling clinic. After a lot of back and forth action, CM Punk got Y2J to tap out with the anaconda vice to retain his title and further solidify his claim as “The Best In The World."

And then, it was time.

The Jabroni-Beating, Pie-Eating, Trailblazing, Eyebrow-Raising, Heart-Stopping, Elbow-Dropping People’s Champ…The RRRRROCK!!!!!! Returned to action after leaving the WWE seven years ago to become a Hollywood box office heavyweight to square off against the face of today’s WWE, John Cena.

There has been a lot of hype for this match, and rightfully so. Both men have been sparring verbally for the entire year, even moreso over the past month, so fans all over the world were ready to see these guys finally(FINALLY!!!....sorry) lock horns.

The match had that “big fight” feel to it as should have. Save for some terrible performances from Machine Gun Kelly and *rolls eyes* Flo Rida, we were off and running.

I’ve been a fan of Dwayne “The Rock” Johnson ever since that fateful night in 1996 when he debuted at the Survivior Series. There was something about the then-24-year-old “Rocky Maivia.” You could just tell. It was evident how much the higher-ups in the WWE thought of him at the time also, because he was the sole survivor and winner of his very first match. On pay-per-view. In Madison Square Garden. Ever since that night, I followed Dwayne’s career closely. All of the ups and downs. It took him a while to find his stride, and when he did, he never looked back. But The Rock appealed to me specifically for a different reason… 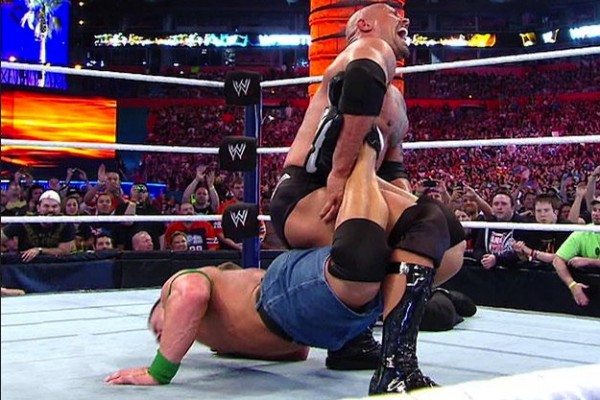 I don’t think it’s much of a stretch to say that pro wrestling over the years has had many minorities that you could reasonably pull for over the years. You had a few, but let’s face it, no one was trying to see or believe Koko B. Ware, or “Special Delivery” Jones as a threat to anyone’s championship. (Sad times right there. Koko’s best friend was a bird. Smh…) But when Rocky Maivia took the “Rocky Sucks” chants and transformed into “The Rock,” black kids, especially a 12-year-old light-skinned kid from Louisiana, had a WWE superstar that I could live vicariously through. He looked like me, he talked trash that me and my friends could relate to, and it just made me proud to see a black man with the WWE heavyweight championship draped over his shoulder and not playing some African tribal character, black militant, or street thug that never got the win (Saba Simba ring a bell? What about Cryme Tyme? No? Good).

With The Rock, candy asses were getting checked DIE-RECK-ALLY into the Smackdown Hotel on a weekly basis, and I couldn’t get enough. When he went on to pursue an acting career, I didn’t really get upset that he was wrestling on a limited basis, because he had given so much to the business that made him who he was. He didn’t change or ‘forget where he came from.’ You never saw him in the tabloids or doing anything crazy. He went about his business the right way, and in this day in age, that is admirable.

After a high impact heavyweight contest, John Cena’s self-assurance came back to bite him on his fruity pebbles ass, as he got caught with a Wrestlemania-sized “Rock Bottom,” as the Rock scored the pinfall in this “Once in a Lifetime” match, all but solidifying his legacy in the annals of the WWE. But for this proud card carrying member of “Team Bring It,” his legacy was solidified a long time ago. Him beating Cena was just the proverbial cherry on top.

If ya smell. What The Rock. Is Cooking.

3 Replies to “Team Bring It Strong: The Rock, Cena, Taker and the Wrestlemania 28 Recap”