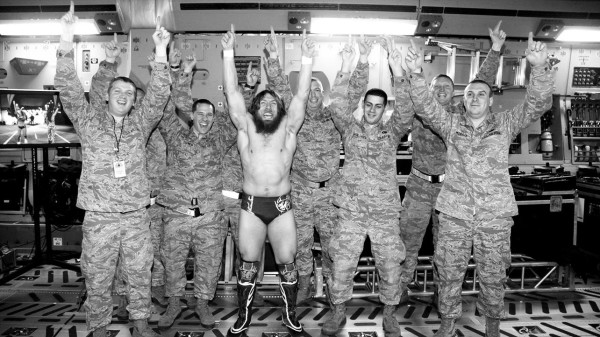 Since the middle of last summer, there has been a movement rumbling up in the World Wrestling Entertainment world, and it's summed up singularly by the word “Yes.” Daniel Bryan has brought the people to their feet in WWE arenas across the country, and the upward pointing/chanting “Yes!” gesture has even crossed into college arenas as well.

Along the way, Bryan has become the greatest underdog in the promotion’s history. On Monday, he added to the long line of memorable Monday Night Raw moments when he literally flooded the ring with the crowd to force his issue and get not only a Wrestlemania match with his constant foil in Triple H, but also for the WWE World Heavyweight Championship if he can defeat the company’s both on- and off-screen chief operating officer.

Wrestling is at its best when its internal storylines carry over into the mainstream and continue to make waves. Hulkamania was a major moment in American 1980s pop culture, just as Stone Cold Steve Austin’s "3:16" era persona crossed over in a major way as well. But all of those sensations went to the next level after a springboard at Wrestlemania, the promotion’s biggest and most esteemed pay-per-view spectacular of the year.

Thus is the test for the “Yes Movement” — can it keep its traction and become the next huge crossover moment for the company after Bryan likely wins the title at the April 7th event? Or does it peak and then head to the valley? Classic times could be in store for Bryan, the WWE and the summer of 2014, overall.

Here’s what else is going on in the world of sports — and beyond:

This Division III Basketball Team Has The Best Bench Celebrations—Deadspin

Why We Watch: Paul George, With Ease—The Classical

4 Replies to “Starting Lineups: The Summer Of 'The Yes' And Daniel Bryan”