SummerSlam has become the second biggest night of the WWE year next to WrestleMania, and this year there is an all-out push to make sure that Sunday’s event registers on every level with pro wrestling’s Super Sunday. They have taken it into the New York City area at the Barclays Center, which has been sold out for weeks, packed the card with a whopping-for-2015 TEN matches and topped it with a rematch for the ages between Brock Lesnar and The Undertaker.

With all of these dynamics in play, it makes it hard to find only five dynamics to analyze coming into SummerSlam, which will play out over four hours on the WWE Network. So for this look-ahead, there will be a special exemption of SIX things to look for coming in — and heading out — of SummerSlam.

And with all things being considered, the WWE is set in good position to springboard into a very interesting second half of the year.

1. Who walks away victorious: The Beast or The Deadman?

The heat between Brock Lesnar and The Undertaker has been an instant inferno every time the two superstars have been in the same proximity of each other. It began last month when Undertaker suddenly returned on the brink of Lesnar defeating Seth Rollins for the WWE Heavyweight Championship last month at Battleground. It was made clear that he had grown tired of the “1 in 21-1” boasts Paul Heyman had made about Lesnar breaking 'Taker’s WrestleMania win streak and was ready to make a vengeful impact in Lesnar’s career as well.

And there was this...

Since that point, there has been drag out fight after drag out fight, highlighted by two low blows to The Beast during the sudden appearances by The Undertaker. But once both get into a ring for a sanctioned match, anything could happen.

The Undertaker’s legacy is secure; he will forever be counted as one of the five or so greatest wrestlers in WWE history. But with Lesnar standing here in the middle of the road as his career gets close to winding down, he feels that he needs to settle the score with Lesnar.

Likewise, Lesnar’s position as the alpha dog of the WWE is on the line as well. Nobody has come close to legitimately derailing Lesnar in the past two years, and he is on a run of domination that has never been seen before. Defeating The Undertaker in the middle of the ring again certifies him even further as the subjugator of the WWE. It is legacy versus reputation on the line for two of the all-time juggernauts in WWE history.

A win for The Undertaker sets up a rubber match that only WrestleMania could hold, which would raise the stakes even higher for the spectacle at AT&T Stadium in Dallas next April. A win for Brock even further puts him over as an unconquerable icon atop the WWE ladder. A win for 'Taker opens up more doors, but keeping Lesnar — who has not come out on top of any of the run-ins between the two over the past month — looking strong in any sanctioned match works in the favor of the younger part-time Superstar. It is a coin toss of how this one ends, but the pre-match stare down alone should be worth it.

Seth Rollins and John Cena have been the two top title holders in the company since WrestleMania. However, both have gone about it in drastically different ways. Rollins has done everything he can to put the WWE World Heavyweight Championship on the line as little as possible, while Cena has been the ultimate working man’s champ in his steady defenses of the United States title. But in Cena calling out — and then defeating — Rollins for the right to challenge for the title, he put himself in line to make history this Sunday. If Cena once again wins the WWE title, he will have the most World Championship reigns of all-time, breaking his current tie with NWA/WCW/WWE Champion Ric Flair. That’s some elite company, to say the least. 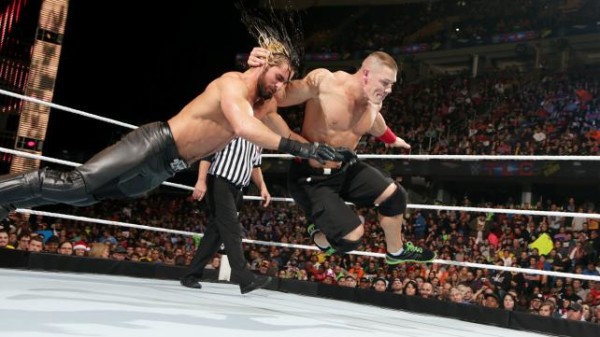 However, Rollins has proven quite adept at turning the odds in his favor to hold his title, and Sunday should be no exception. For as much of a weasel as he can be, Rollins regularly delivers when the bell rings. Add that in to the fact that he has found a way to endure rivalries with Lesnar, Randy Orton and Dean Ambrose, Rollins knows how to hold his high ground within the company.

But Rollins has never faced a man with as much big match flare as Cena. Add in the fact that he legitimately broke Cena’s nose a few weeks ago, and there are even more flames to fan between these two. During their respective title runs over the past few months, Rollins and Cena have been parts of easily the best matches that the company has displayed this year, and Sunday should see a classic showdown without a doubt. It’s either a historic Sunday for Cena, or another notch in the quietly impressive first reign of Rollins.

3. Can Kevin Owens And Cesaro Steal The Show?

In a card with two major headline matchups, but filled up with eight other matches, there is room for the surprise match to take the headlines at the end. The match with the most chance of doing this is likely the showdown between Kevin Owens and Cesaro, who are respectively the fastest rising heel and face on the mid card. Owens was red hot during his debut rivalry with John Cena over the past few months, delivering several classic matchups. On the other hand, Cesaro has been on the brink of a breakthrough for what seems like forever now, but has not been able to get a prolonged dance partner to work with that keeps him in the spotlight. It is perfect timing for both to tangle now, and if they can get enough time on the card to get all of their stuff in, it could be high point in the show.

4. Does The “Diva Revolution” Continue To Show High Marks?

The Divas division has had a booster shot of life over the past month with promotion of Sasha Banks, Charlotte and Becky Lynch to the main roster. It has allowed three distinct women’s groups to break out — Team PCB, Team Bella and Team B.A.D. — and feud with each other. The re-invigored Divas division even provided the main event match on this past week’s Raw (the "go home" show leading up to the pay-per-view) between Divas Champion Nikki Bella and the NXT Women’s Champion in Banks, who was surprisingly victorious. 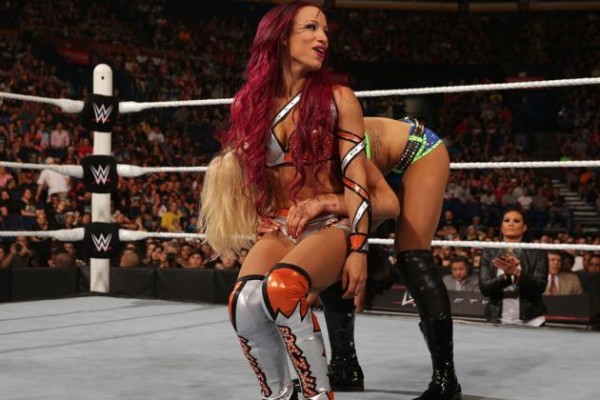 When all three factions are placed against each other in a nine-woman tag match on Sunday, the sparks should fly and set the table for an interesting setup of events leading into next month’s Night Of Champions as to who out of this deep group of emerging talents gets to challenge Nikki Bella for the Divas title.

5. Will Sting Make An Appearance?

Last year at Survivor Series, the next major milestone event in the WWE calendar, Sting made his WWE debut and changed the course of The Authority’s reign in a major way during the main event. Is it possible that he could make a similar appearance at SummerSlam? It is the perfect event to set up a long-term program for him with any number of stars to have beef with down the road.

Could he interject in the Wyatts vs Ambrose and Roman Reigns tag match, and have a long-term angle with Bray Wyatt? Does he come in to stop Seth Rollins from taking an advantage to hold on to the WWE title, and therefore reignite his feud with Triple H in the process? Or does he cut into The Undertaker’s affairs in a similar fashion to how The Deadman did Lesnar’s last month and set up a headline match for WrestleMania XXXII? If Sting does show his face, there is no limit to the impact it could make.

6. Does Sheamus Finally Cash In The Money In The Bank?

Since winning the Money in the Bank briefcase a few months ago, Sheamus has only teased an actual cash in one time. But could that be in line to change if John Cena comes out on top? It would be a massive change of direction, but could be feasible as well. It would allow Cena to remain United States champ — and therefore in the title picture — but also shake up everything in terms of story line. It is not an event without historical precedent, as Randy Orton infamously cashed in against Daniel Bryan in one of the most shocking ends to a PPV in recent history at SummerSlam 2013. Anything is possible when the MITB is in the picture.