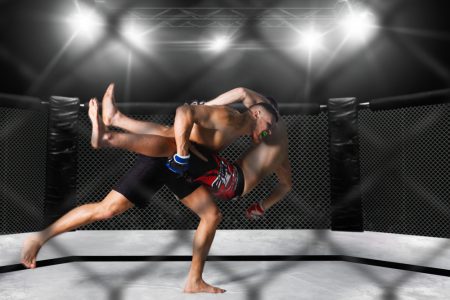 It’s hard to believe that this is really a debate. The answer seems so clear.

For those new to the wrestling world, to understand the debate about whether freestyle or Greco-Roman wrestling is better in MMA, you’ve got to understand the difference between these two styles of wrestling. In freestyle, athletes are allowed to tackle the legs as well as devise all manners of moves (e.g. foot sweeps, funk rolls, etc.) that involve contact with an opponent’s legs. In Greco-Roman wrestling, the legs are completely off-limits. Even once two athletes are on the ground, Greco wrestlers can’t score points by using moves that target the legs, as with a leg lace.

A while back, two-time freestyle Olympian Daniel Cormier was asked his opinion on which style was best suited for MMA. His answer wasn’t surprising.

Cormier’s answer makes perfect sense. Usually, when pundits and critics talk about why wrestlers tend to transition more easily than others into MMA, they focus on skills that are more firmly associated with freestyle wrestling.

There are some traits common to all wrestlers. In this grueling sport, all practitioners, especially those who stick it out and start winning accolades, develop a strong work ethic, great balance and intelligent hip movement. But when you start talking about great takedowns and takedown defense, however, you really enter into the world of freestyle wrestlers.

In MMA, all fights start on the feet. There are no prohibitions against leg tackles or foot sweeps, or any other leg manipulation. Freestyle wrestlers, especially those who’ve reached Cormier’s elite level, have spent a lifetime refining an offensive skill set that includes leg attacks. Greco wrestlers haven’t. That’s not to say that elite Greco wrestlers like Dan Henderson — a 1992 and 1996 Greco Olympian — can’t defend a double leg tackle. Henderson, as with most elite Greco guys, spent much of his formative years learning to do just that. In a head-to-head battle between Cormier and Henderson, however, there is just little doubt about who would have better leg attacks. Cormier's leg attacks beat out hundreds of others to earn him a spot on the Olympic team; Henderson didn’t have to do any leg attacks to win his spot.

Consequently, in the cage, freestyle wrestlers are more likely to have an easier time taking fighters off their feet and implementing the ground-and-pound style made famous by Mark Coleman, a freestyle wrestling Olympian.

For the same reason freestyle wrestlers are better offensively in the cage, they are also better defensively. Elite freestyle wrestlers like Cormier, Ben Askren and Henry Cejudo have spent a lifetime learning how to shift their weight, tweak their hips and squirm their legs out of leg attacks. While Greco specialists at Henderson’s level have certainly had a ton of experience doing the same thing while they were coming up, they haven’t had that skill tested by the same level of competition as elite freestyle wrestlers. That was never their focus. So if you’ve got to bet on who is more likely to have better takedown defense in MMA, a freestyle guy or a Greco guy, it’s not a difficult decision.

Greco wrestlers, by the very nature of the rules that govern their sport, get more experience in the tie-up. That experience, learning to shift body weight to create leverage for a throw or to worm out of a dangerous clinch or tie, is incredibly valuable in the cage. Freestyle wrestlers have plenty of experience in those positions — just not as much as Greco guys.

Yet, because freestyle wrestlers are allowed to attack the legs even from the clinch/tie-up, their skills are ultimately more valuable in MMA. While freestyle guys are less likely to convert this position into a throw, they have other useful techniques. One of my favorites is a knee tap from the tie-up, which in MMA ends up looking like this:

Thus, even in the clinch/tie-up, where Greco wrestlers undeniably spend more time than freestyle wrestlers, in the cage, a freestyler wrestler’s approach to the position is more useful.

So far I’ve omitted from this discussion any mention of folk style wrestling. What is folk style? It’s a unique U.S. creation. The U.S. is the only country in the world that does it. In overly simplistic terms, it’s like freestyle on the feet, but on the ground there is a totally different set of rules and strategy. Whereas in freestyle the goal is just to “expose” an opponent’s back to the ground for even the smallest millisecond, in folk style you must demonstrate prolonged, controlled exposure of an opponent’s back in order to be awarded points. That might not sound like much of a difference, but it leads to a vastly different set of moves.

This is the freestyle ground game, called “par terre.”

This is the folk style ground game, which is seen in high schools and, with slight differences, in colleges across the country.

Once on the ground, the freestyle/former-folk style wrestler spends more time learning how to hold down their opponents than Greco wrestlers. Freestyle Olympians like Ben Askren, who had distinguished folk style careers, are adept at sticking to their opponents like glue. If you’ve ever watched any of Askren’s fights, you’ve heard the announcers praise his heavy hips and ground control. That’s a skill set that is far more developed by freestyle/folk style wrestlers, who have a much larger tool set to work with, including the incredibly effective and devastating double leg ride.

Greco guys aren’t allowed to use any form of leg ride.

None of this is to say that Greco wrestlers can’t defend leg attacks at all, that they’re bad at takedowns or can’t hold guys down on the ground. It’s just that when compared to the best freestyle guys out there, Greco specialists simply don’t have the same degree of focus on the skills that are more commonly used and useful in MMA. A freestyle wrestler brings a skill set more immediately adaptable and effective in MMA.

But I’m one man. If you disagree, I’d love to hear why. Let the debate begin.

One Reply to “The Great Debate: Better Wrestling Style For MMA, Freestyle Or Greco?”