This Sunday, the WWE returns to the special event stage with the first of two (more on this later) pay-per-view events, with WWE Payback on the WWE Network. Coming into this weekend, the storyline situation has nearly completely evolved around the main event, which has morphed into both an in-ring rivalry, as well as an outside competition for position, all of which are based around Seth Rollins. During Rollins’ run as WWE Champion over the past two months, he has stirred up more trouble than any champ in recent history, battling everyone from Randy Orton, Brock Lesnar, Roman Reigns and Dean Ambrose in-ring, to even firing up with Kane and Triple H outside of it, both of whom are in his own stable, The Authority.

How will the hurricane of events around Rollins and his belt play out this weekend? The Fatal Four-Way between Rollins, Orton, Reigns and Ambrose for the WWE Heavyweight Championship is the centerpiece of a top heavy event. But what else will be made to come of the few other storylines that are simmering as well during the WWE’s build up stage of the early summer card? One thing for certain, Payback is setting up to be springboard in a variety of different directions. 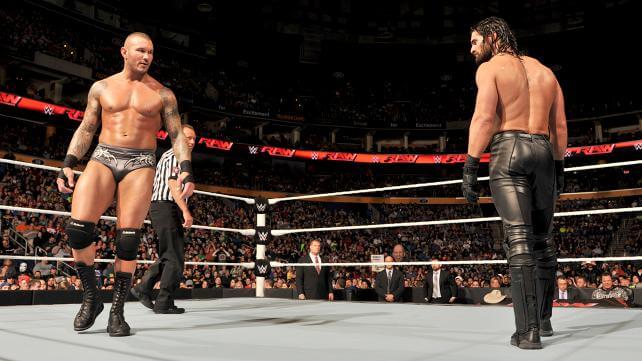 How Will Seth Rollins Survive His Self-Made Sh*t Storm?

If he has been anything over the past year, Rollins has without a doubt been the biggest rabble-rouser the WWE has seen in a very long time. He ended The Shield, played his cards into landing the Money In The Bank contract and then cashed it in on the back of his former teammate Reigns and underneath the nose of the indomitable Lesnar. He carries at least five active and legitimate enemies along the way and he is pitted in the ring with three of them at once this Sunday.

At this point, the odds lean heavily in favor of Rollins finding a way to leverage his surroundings in his favor to retain his strap. He is as cunning of a character as can be imagined, and while he will be pitted in a match where he will be subject to more of the same that he faced at the end of Monday Night Raw, where he took the Dirty Deeds, RKO and Samoan Spear in order, it would be smart money to bet that he finds a way to capitalize on a breakdown between the three faces in the match (which would most intriguingly be a Reigns/Ambrose blow up) and then come in on the back of another near finish for Reigns or Orton and do what he does best – steal the match away from underneath one of the biggest faces in the biz.

How Will Kane Factor Into The Main Event?

The heated showdowns between Kane and Rollins have been arguably the most consistent beef on the show over the past month. Kane is at his wit's end with the cocky Rollins benefitting from the work that the Director of Operations has put in on his behalf. It reached the point where Triple H himself had to make the declaration that Kane needs to re-dedicate himself to serving the interests of Rollins first, whether he likes it or not. Hunter even went to the extent that if Rollins does lose the belt this weekend, he will be out of his job as DOO for The Corporation.

Where will this go? Could Kane and Rollins continue to feud into the point where Kane does indeed cost Rollins the belt and ignite a war between himself and The Authority in the same way that Orton did last year? Or will he do the favors and ensure Rollins’ reign continues against the potent odds he is up against?

The Rusev vs. Cena Beef

While the storyline between John Cena and Rusev has been entertaining, it has largely run its course and it is time to bring it to a head. However, the added stipulation of their next match being an “I Quit” match puts it in a tough corner to call. The complete image of Cena right is built around him being the variable “defender of the stars & stripes” as United States Champion. It is the sole thing that makes him particularly remarkable currently, besides just being John Cena, which is beginning to have a Hulk Hogan in the early 90’s or Steve Austin in the early 2000’s type of passing importance to it.

Keeping Cena relevant is important, but will it be continued at the expense of weakening the previously unstoppable Rusev even further? If Rusev says he quits, it also drives him completely away from the last stitch of truly potential relevance as an enemy of the state and potential top heel by being that. A lot is on the line here, least of all being the belt itself.

The Intercontinental Championship Portion Of The Elimination Chamber

There are two non-title matches that have had basically the same beefs between them over the past month on the card: Sheamus vs. Dolph Ziggler and Neville vs. the now “King” Barrett. They should likely don’t stand to be much more than time fillers with the flare of a Smackdown main event this weekend, but all four competitors will likely fill out four of six spots in the Elimination Chamber event that will close out the month on May 31st.

How they position themselves coming out of these matches will be interesting, because each has had a particularly strong build within the last few months and each brings a different dynamic to what can be done in the confines of the Elimination Chamber.

Ever since the WWE put all of the black guys lost in the roster abyss together and gave us 'The New Day' (and its ever so subtly ridiculous & slightly racist promos), nobody quite knew what to do with them. But that changed when they became a 'Troll de force' of a faction that turned the crowd's growing annoyance with them back towards us all, and instantly became the hottest heel tag team around. They got so hot that they forced the duo of Cesaro & Tyson Kidd into being cheered for, simply just to shut Big E, Kofi Kingston & hype man extraordinaire, Xavier Woods, up.

The trio semi-shockingly landed the Tag Team Championship last month at Extreme Rules, and ever since they have cornered the market on being more annoying than could be believed. The two teams will have a rematch this Sunday, when it is more likely than not that New Day finds a way to once again pull a Doink the Clown level hijinxs out to keep the belts around their collective wastes. Tag Team Troll-A-Mania will still be running wild.