To the naked eye and the casual ear, the Stanford vs. UCLA game this Thursday night might seem like a prime time Pac-12 matchup – a grudge match of sorts between two embattled programs.

UCLA leads the series 45-38-3. The Cardinal have won the last seven meetings in the series (four straight at Stanford). But the Bruins had captured the previous five meetings with UCLA‘s last win came in a 23-20 home game in 2008. Stanford’s seven straight wins over UCLA are tied for the program’s best active win streak against any opponent (seven straight wins vs. Washington State), and marks the longest winning streak for either team in the series.

The fact that the Bruins have not beaten the Cardinal is so long has morphed this standard north vs. south game –  California, of course – into some sort of epic showdown.

To be fair, there are several choice story lines:

The Vet vs. The Hot Shot

This game gives us an intriguing duel between Stanford’s senior QB Kevin Hogan and UCLA’s freshman signal-caller, Josh Rosen. Hogan is 81-of-120 on the season for 1,155 yards, nine touchdowns and only two interceptions. He also boasts a 169.8 passing efficiency rating, which ranks him seventh nationally. Rosen is 102-of-168 for 1,243 yards, also with nine touchdowns, but has thrown five interceptions. His passing efficiency is 134.59. With seniority, Hogan clearly has experience in these battles with a 28-9 career record as a starter and a 12-6 record vs. AP Top 25 teams. Hogan’s 28 wins are the second-most by any active college player. But Rosen is learning quickly.

Rush to the Top

Last year’s Pac-12 rushing leader, Paul Perkins versus this year’s title contender Christian McCaffrey. UCLA’s Perkins ranks 30th nationally with 100 rushes for 577 yards and seven touchdowns. Those numbers make him fourth in the Pac-12, averaging 115.4 yards a game. Stanford’s McCaffrey ranks 21st nationally with 105 rushes for 601 yards and one touchdown. The sophomore running back ranks third in the Pac-12, averaging 120.2 yards per game. McCaffrey also averages 229.8 all-purpose yards per game which ranks him first in the Pac-12 and second nationally. Basically, stopping the run will be a challenge for both teams.

The Men in the Middle

Two senior centers both named to the Rimington Watch List. UCLA’s Jake Brendel is a known leader on the Bruins squad and has 44 career starts to hang his hat on. Stanford’s Graham Shuler is only in his second year as a starter, but head coach David Shaw has pronounced him the “smartest guy” on the field. Protecting their respective quarterbacks will be key, as pressure can equal turnovers which will be a determining factor in this game.

“Their defensive line coach is one of the best in the nation and they always bring a solid group,” said Brendel in an interview. “That’s what they’ve been bringing since I’ve been playing them.”

We have two head coaches that have done great things for their respective programs. UCLA head coach Jim Mora not only has 25 years of NFL coaching experience, he led UCLA to its ninth 10-win season in school history last year and has the most wins of any UCLA coach in his first three seasons (29). Stanford has benefitted from Shaw as well – Shaw is undefeated against six Pac-12 opponents, including UCLA. He also has 30 wins in his first 35 games, which was the third-fastest among active coaches. Not to mention the three BCS bowl game appearances in his first three seasons as head coach. But that’s the past, and Shaw doesn’t believe past games help you win present ones.

“What happened last year of the year before that doesn’t matter,” said Shaw. “We talked about it with USC. They had beaten us two years straight – ok, we beat them four years straight before that. But no previous game ever truly effects the current game.”

All those matchups, numbers, statistics will make for a good football game, not a life-changing one.

When asked about the magnitude of this particular game in respect to his career coaching at Stanford, Shaw responded with a similar sentiment.

“I never know how to answer that question,” said Shaw. “They are all hard to measure. Every game, especially every conference game is always big and if you win them then they get bigger.”

Basically, check back next month when Stanford hosts Oregon, Cal and Notre Dame consecutively. Then we will see how big this UCLA game really was.

UCLA-Stanford: 4 Storylines That Could Make For The Ultimate Thursday Night 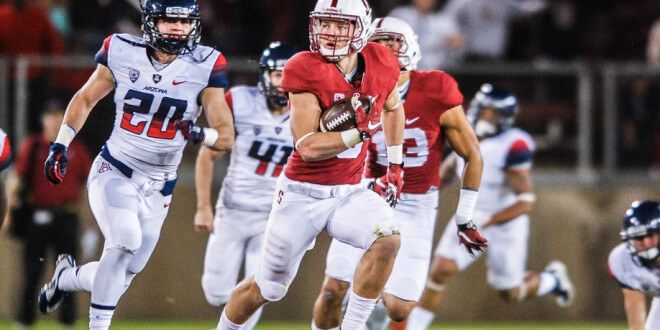