This underwater sport began back in the 1950’s to help British diving club members stay fit during the winter months, when traditional diving was too difficult to practice. “Octopush” which is sometimes also called “underwater hockey”, has a lot in common with its ice-based cousin, save a few major differences.

First off, the puck is much heavier than normal (it weighs almost three pounds!) to make sure it sticks to the bottom of the pool and isn’t jostled around by the swimmers and/or starts floating during play.

Secondly, the players have to wear snorkels and use small, foot-long hockey sticks to move the puck around, and try to score goals. The last big difference is that, considering Octopush takes place underwater, the game is much more slowly-paced that traditional hockey, and competitors can’t usually do much beyond gasping for air, diving deep down and quickly passing the puck to a teammate... before coming back up to breathe.

Imagine if you shrunk down all the jumps on an equestrian course, and then replaced the horses with a bunch of cute little bunnies and rabbits? Well, that’s exactly what those kooky swedes did, when they invented “Kaninhoppning” the most adorable sport in the world!

The name translates directly to “rabbit hopping” and sprung up (pun intended) in Sweden in the 1970s. During the competition, rabbit trainers guide their pets with leashes, through an obstacle course that looks similar to those used in horse-jumping competitions.

The rabbit who manages to complete the course the fastest, with the least amount of mistakes or errors, is declared the winner. Despite how sweet such a competition may sound, these animals are quite powerful! The highest rabbit jump ever recorded was 39 inches (almost a full meter), and the longest was nearly 10 feet (over three meters!).

Bo-taoshi, which basically means “pole-toppling”, is a particularly violent type of “capture the flag” game.

The “flag” is left in plain sight and is in fact nothing more than a giant pole, surrounded by a team of 75 players who must defend it at all costs.. but that’s only half of the team! Another swarm of 75 players must attack the opposing teams pole and knock it down to a 30-degree angle (compared to the ground). That means there are 300 players slamming into each other, as they attack and defend simultaneously, in a race to see which team makes the other pole fall down first.

The sport first originated in the 1940s as a training exercise for young recruits in the Japanese military, but nowadays, it’s played in school during gym class, on cellphones (when people search for “crazy Asian game-shows”) and, more ceremonially, during the “Acceptance Ceremony” for new cadets, at the National Defense Academy of Japan.

Admittedly, it does look rather bizarre to see boxers finish a round, take their gloves off and pull out a folding table in the middle of the ring. Stranger still, is watching these fighters strap on some earphones, tune out the world and focus intently on which chess move to make next... until the bell rings and they’re back to punching... And yet, that’s exactly what Chess Boxing has to offer!

In this insane sport, opponents are forced to not only spar mentally, but physically as well, during 11 alternating rounds of boxing and chess. This is one of the rare sports where you can win by decision, knock out or “checkmate”... so if you hear of another one, let us know! We might even write an article just for you.

This is nothing like your average game of pick-up soccer, because instead of using a ball made of plastic, rubber or leather (like normal people) the fearless players of this sport prefer kicking a coconut soaked in gasoline, and then set on fire.

That’s right! These dudes just kick a rock hard, flaming ball of pain around to celebrate the arrival of the Ramadan month, with nothing more than a slight coating of salt and nonflammable spices, to keep them for literally burning to death. Oh and did we mention that they’re kicking this coconut with their bare feet?

So yeah, matches of fireball soccer are definitely a “must see” if you’re visiting Indonesia, but think twice if they ask you to participate... In fact, the pre-game rituals are just as important to the players (and their safety) as the game itself, because after weeks of fasting and prayers, the competitors have trained their bodies to be impervious to flames... or so they claim.

Kids, please don’t try this one at home! 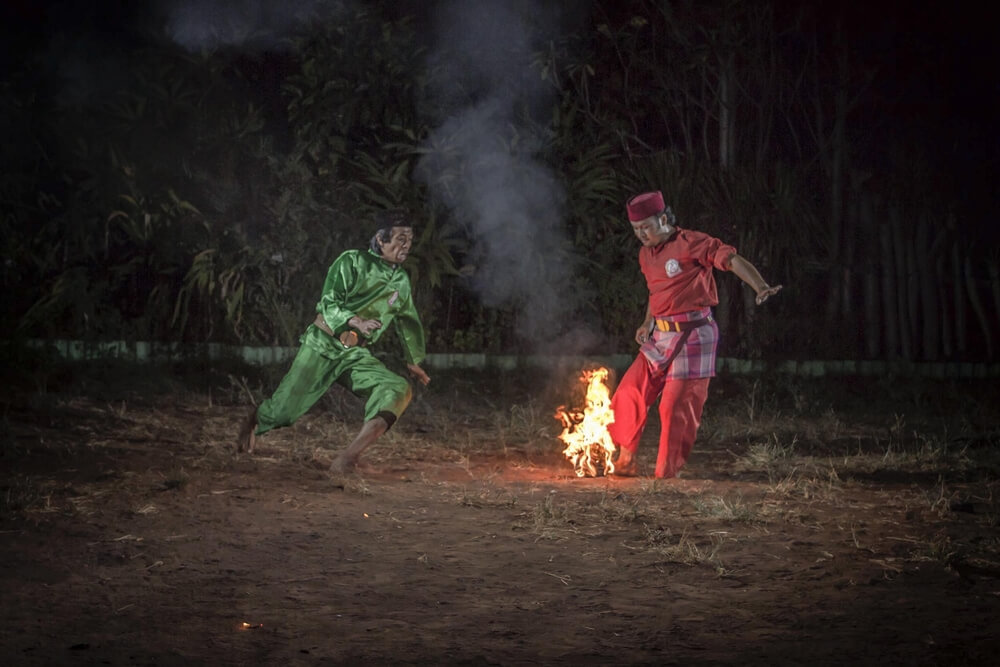