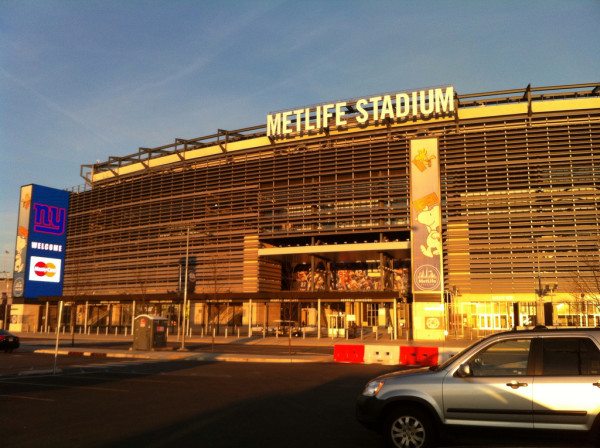 There are quite a bit of you who will chomp on every morsel between now and Super Bowl 48 in New Jersey. The Rant of Richard Sherman, for better or worse (worse), has added a different kind on anticipation, and there will be reporters trying to bait the Seattle Seahawks cornerback into a Fred “The Hammer” Williamson moment. The breathless fawning of Peyton Manning and Russell Wilson will fill the air once that’s done because at some point, you can’t let anyone else but the quarterbacks take up all 140+ hours of televised coverage.

Even the kinda funny references to legalized marijuana (Colorado and Washington State) will be meme-fied all over Twitter, Facebook and Instagram before the first toke snap.

And there will be a good bit of you who are sane enough to ask, “What the hell do I do for the next two weeks?”

These next two weeks bring out the absurd, the “funny on Tuesday morning but jumped the shark on Tuesday night” and the strummed up human interest stories that are to strike a chord with people who only care about football in early February. Let’s not forget the Super Bowl ads, which, thankfully, haven’t overshadowed the game itself in quite some time.

As the seemingly resident curmudgeon here, instead of whining, moaning and groaning about these next two weeks, here’s something much better. You need to take a hiatus from the chatter. Here are a few options.

Catch up to some basketball, for starters. Yes, in the NBA, the Eastern Conference is a disaster and there really isn’t much else to say on that. However, night after night, there’s a chance of the “OH S***!” moment, whether it’s another display of sheer skill on the court or the funny from the blogosphere. As for the amateurs, the freshman class in the men’s game this year is tantalizing the masses while some juniors and seniors do the same for the women.

There’s the NHL, speeding its way into the Olympic break. The biggest story outside of Russia’s anti-gay legislation whirls around the national teams as Canada is set to defend its 2010 gold medal, the U.S. hopes to dish out some revenge and Alexander Ovechkin leads his home country’s squad. In relation to the NHL, pay attention to how coaches and players try to balance the need to compete strongly abroad while keeping the intensity going in the league itself.

As Dillon Friday broke down a few days ago, there’s a ton of Premier League action that you either want to catch up to or at least understand. Last year, FOX tried to combine football and fútbol with no real cohesion. NBC Sports Network fills your need these days with wall-to-wall coverage (if you need a reminder, let Jason Sudeikis help you out).

Of course, the Australian Open is winding down, the PGA Tour gets ready for another season and there is always a television crew covering a fight somewhere in this world. You could even spend these next 12 days coming up with an alternative Super Bowl halftime show! (What the heck is a Bruno Mars, anyway?)

We cannot forget that there are the good old non-sports standbys. There’s a book you haven’t touched since the summer ended. You’re a full season behind on some shows on Netflix (yours truly loves this option). And it’s only been three weeks, but you still have that “will exercise more” resolution to at least attempt to meet.

You might even go to church and stay for the whole sermon. If you’re of any faith, that is.

No matter how you choose to pass the time, enjoy it. When you come back from this break, you’ll be better for it.

Meanwhile, to help you along your way, a few links.

Words With the Dragon: A Conversation with (WWE Superstar) Daniel Bryan – The Classical

The Round Bus with Alex Wong (Steven Lebron) - The Barnstormer

How Gatorade Turned Water Into "The Enemy of Performance" - The Verge

Going the Distance: On and off the road with Barack Obama - The New Yorker

Up and Down and Unfair: Embiid, Wiggins, and Kansas in 2014 - Grantland