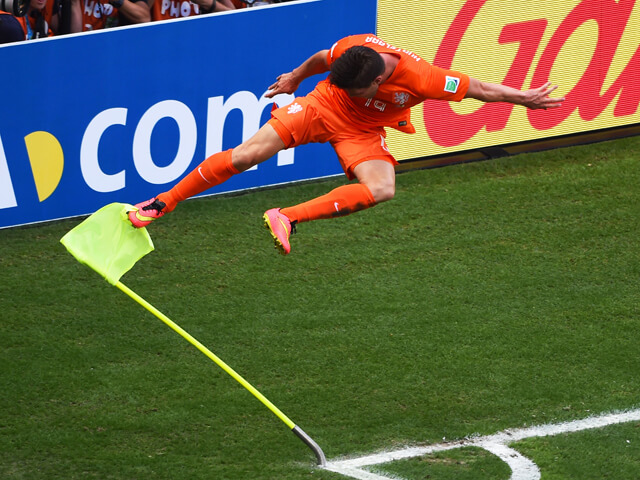 Take a breath. You need it. This World Cup has shown no regard for people's health. It has sent atheists to confessional booths and Catholics to the altar of the heretical soccer gods. If the group stages and first four round of 16 matches are any indication, we'll all need heart transplants by tournament's end. Here are four takeaways from the weekend in Brazil.

Hulk gifted the Chileans with the equalizing goal when his errant ball found the feet of Alexis Sanchez. But it wasn't the pass that epitomized the Brazilian psyche. It was Hulk's apparent go-ahead goal. He settled a long ball with his massive bicep before sliding it passed Claudio Bravo. Howard Webb spotted the infraction and disallowed the goal.

Colombia 2, Uruguay 0: James Rodriguez is the best player on the best team

On Neymar's stage and during Messi's month-long “best player ever” party, Colombia's star number 10 James Rodriguez has shined brightest. Through four games he has scored five goals and assisted on four others. Rodriguez is an elusive dribbler and a clever passer, like a young Andres Iniesta, who lines up centrally. In the round of 16 match with Uruguay, the 22-year-old put all of his talents on display.

Soccer, like basketball to a degree, allows skill to go unchecked. Defenders can't physically abate attackers the way they can in hockey or football. If a player has the space to take a ball down off his chest, turn and fire a volley from 25 yards out, there's nothing you can do to stop him. James did just that to open Colombia's scoring on Saturday. His second goal came off some stunning build-up play. The Colombians strung together 10 consecutive passes from the right side of the field to the left, from the center circle to the goal line and back to the six. Rodriguez was there to head the ball home with the Uruguayans standing hopelessly all around him. The 2-0 win reaffirmed what we might have suspected: Colombia is the best team at this World Cup. James Rodriguez is the best player. He and Los Cafeteros play with so much joy — see their goal celebrations for evidence — and they're such a joy to watch.

The Netherlands 2, Mexico 1: How do you define "penalty"?

Let's talk definitions. A foul occurs when a player impedes another without first touching the ball. Are we okay with that? Sounds accurate? Jersey pulls, foot stomps, late slide tackles, shoulder grabs all fall, for lack of a better word, under this term. A penalty is called when a foul occurs in the box. Simple enough?

Okay. Rafa Marquez fouled Arjen Robben when he stepped on the Dutchman's foot in the 92nd minute of Mexico's clash with The Netherlands. The referee blew his whistle, showed Marquez a yellow card and pointed to the spot where Klaas-Jan Huntelaar gave Holland the only lead it needed in a 2-1 win.

I think I'm sort of, kind of with the official on this one. You can't alter the rules of a game for convenience. Which is to say, a goal in the first minute is equal to one in the 91st. It wasn't easy to watch. Of course, it rarely is. The Dutch don't necessarily deserve a win in a match they trailed for 88 minutes, but they earned one.

No game in my memory epitomizes the twisted world of extra-time soccer better than the Costa Rica-Greece match on Sunday. Los Ticos went ahead early in the second half through Bryan Ruiz but soon found themselves down to 10 men. The Greeks sent on three attacking substitutes to push for an equalizer, while the Costa Ricans bunkered down for the final half hour. By the time Sokratis found a stoppage-time goal for Greece, all 21 players on the pitch were spent. And we had 30 more minutes to play.

The advantage in tactics left Costa Rica defending for their lives. Joel Campbell ran himself into the ground trying to attack as a lone striker. The Greeks, though, exhausted as they were, couldn't deliver a quality cross to save their World Cup lives. On the rare chances they did get in front of goal, Costa Rican keeper Keylor Navas made the saves.

It was a sloppy extra time that exonerated the controversial penalty shootout in observers' minds. The players could barely stand when that final whistle blew. I had a different takeaway. Isn't it time FIFA allowed one more substitution for extra time? A team receives three subs for 90 minutes of a play. Thirty more minutes, then, should give you one more sub. Greece used its three changes to spark its offense. Costa Rica did the opposite. The tone of the match in the dying stages matched tactical switches that occurred nearly an hour before the final whistle.

Still, Costa Rica was able to persevere. Los Ticos went five for five from the spot, and Navas produced one more spectacular save to give his country its first berth in the World Cup quarterfinals. The dream run, however, was nearly derailed by FIFA's archaic rules.

Meanwhile, the celebration in San Jose is just getting started. Enjoy it, Los Ticos, enjoy it.

3 Replies to “4 Takeaways From The World Cup Weekend: How Do You Define "Penalty"?”