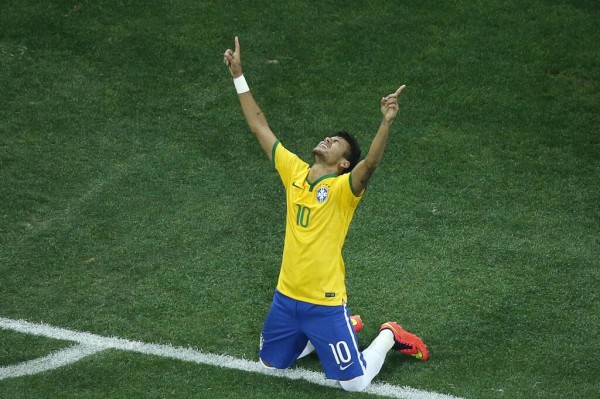 Brazil's 3-1 victory over Croatia was a microcosm of the World Cup as a whole: goals, controversy, poor refereeing and Neymar. Lots and lots of Neymar.


Here are five immediate thoughts on the first game of the 2014 FIFA World Cup in Brazil.

Don't let the 3-1 final scoreline fool you. If you watched the game, it surely didn't. Brazil looked listless for a nation playing in its first World Cup on home soil in 64 years. El Selecao needed a dubious penalty (more on this) and shoddy goalkeeping from Croatia's Stipe Pletikosa to escape with the three points. The midfield was all but invisible, and some wayward positioning from the likes of Dani Alves and David Luis reopened concerns about the Brazilian defense. Alves was caught out on a couple of occasions, one of which led to the opening goal, a low cross from Ivica Olic that Marcelo turned into his own net.

And where was Fred? I wouldn't be surprised to see a new man leading the line when Brazil takes the field again. Aside from drawing the penalty with a pathetic fall, Fred had little influence on the game. He was late to a terrific Oscar cross in the first half and failed to link up with fellow attackers Hulk and Neymar in any significant manner. Manager Big Phil Scolari, and hundreds of millions of Brazilians, will want more.

Then again, Croatia is as tough an opening opponent as any host has ever faced. The Croats were the better team for much of the first half. Olic, as he did on Croatia's lone goal, found space on the left flank routinely. He also had a great chance to grab a lead early in the match only to see his header bounce just wide.

I thought Luka Modric was the best player on the field as well. The Real Madrid man controlled the midfield all game. He finds and exploits space so effortlessly that it allows his teammates to break into their runs earlier in the play. That's where Croatia succeeded the most. It just lacked the final touch of quality near goal. The return of Bayern Munich striker Mario Mandzukic, who missed out due to a red card suspension, will certainly help their cause. Croatia was always the favorite to make it out of Group A along with the hosts. They were very unlucky not take any points from today.

Neymar gets off on the right foot

The poster boy — and at 22, he's still very much a boy — rose to the occasion on Thursday. He scored two goals in his World Cup debut, although both required a level of luck. Neymar's first came off a seeing eye shot from range that rolled its way to the left post. Pletikosa went to the ground far too quickly, but stlll, it was a well-placed shot.

The second goal came off a penalty that the keeper got both palms on. Neither will likely make Neymar's vast highlight reel, but we shouldn't downplay the importance. Not only did they secure two points for Brazil, but they were two gift goals that can ease Neymar into the competition. Goalless droughts have a tendency to weigh on players, especially ones as young as Neymar. Many predicted the crafty Brazilian would take home the golden boot. He has a nice head start.

Ian Darke said it on the broadcast much more calmly than the millions of Croats who were watching from abroad and the 11 who were on the pitch. Dejan Lovren did nothing more than drape an arm over Brazilian striker Fred. And yet Fred went down like a Stark on Game of Thrones, and the Japanese referee, who had a clear view of the play, pointed to the spot. I'll concede that it was a difficult challenge to judge. Lovren was all but hidden behind Fred. But in the World Cup you can't err on the side of penalty. It has to be clear. Goals are too important. I doubt the referee will see another match this World Cup. He shouldn't. Fred, on the other hand, should be suspended for his dive. That's the only way to provide a deterrent. Otherwise, players will continue to drop like flies in the box.

Nothing compares to the World Cup

When every Brazilian present at the Arena de Sao Paulo continued to belt the country's national anthem long after the music stopped, I could have turned off the television then and there. The pageantry of the World Cup is unmatched. So too is the emotion. Julio Cesar, the Brazilian keeper, was in tears as the last words faded out. Neymar was visibly moved as well. A beautiful new stadium, a wondrous atmosphere, the poetics of Ian Darke on the call and a game that featured four goals made for a worthy appetizer. This is just day one. Spain plays The Netherlands tomorrow.