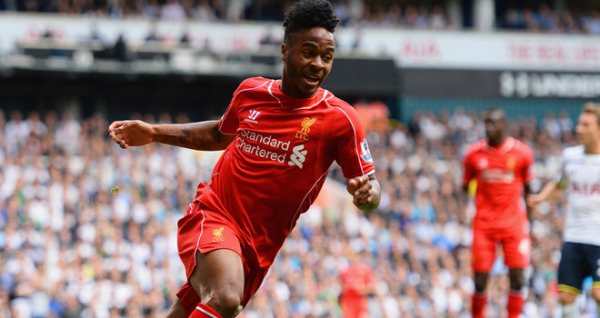 There are few players quicker than young Sterling and fewer in the world as deadly as the Liverpool and England teenager on the counterattack. With some development still to do — his shot needs a little work — he's already one of the few names you can assume will be starting for England whenever the national team plays. And there are some who say that he's already England's most important player.

In two years, barring any injury, he'll be lining up for England in the 2016 UEFA European Championship with all of the soccer world watching him. Between now and then, it'll be all of England watching him with Liverpool and the national team. There's a lot of pressure on Sterling. He's next, for club and country.

That pressure has only increased after the departure of Luis Suarez. Liverpool has plenty of offensive players to help fill Suarez's gap in the goal scoring, but few can frighten defenders like the Uruguayan did as well as Sterling. A defender can't be comfortable while Sterling or Suarez is on the field. One wrong step, and they're swarming the defender, then hauling off toward his goal. Sterling owes some of his quality to Liverpool manager Brendan Rodgers, although Sterling and Rodgers didn't exactly get off to the best of starts.

Rodgers has, on occasion, moved Sterling in from the wing to play just behind the strikers. That switch allows Sterling to get more involved in attacking moves, which has helped his distribution and his movement off the ball. It's this role just behind the strikers, the central attacking midfield or the number 10, that Sterling played this week for England against Switzerland. He had a quiet first half against the Swiss but managed to get himself an assist on Danny Welbeck's first goal in a 2-0 win.

Wayne Rooney, the new England captain, partnered Welbeck at striker. It was not long ago that Rooney was in Sterling's position: the next young savior of England. Before Sterling, it was Rooney. Before Rooney, it was Michael Owen. And so on down the line. What remains to be seen is how much blame will fall at Sterling's feet for failure in the Euro 2016 tournament and beyond, because failure is coming for England.

In the FIFA world rankings, England currently sits 20th, 12th out of teams in Europe. They should climb after a really pitiful 2014 World Cup, but it's still clear: England isn't going to win much of anything for a while. The quality of the team, from top to bottom, is not enough for England to be competitive. That includes the manager. But that doesn't do much for Sterling with England. The focus won't be on him like it is for Rooney, but the spotlight is burning brighter with each successive impressive performance Sterling puts in. The English are looking at Sterling to get them to the gold in 2016. They want to crown him now. The same is true with Sterling's Liverpudlian fans.

The difference? England needs Sterling to wear the crown now, to consistently be outstanding. Liverpool doesn't just yet.

"Some people believe football is a matter of life and death, I am very
disappointed with that attitude. I can assure you it is much, much more
important than that."
-Bill Shankly