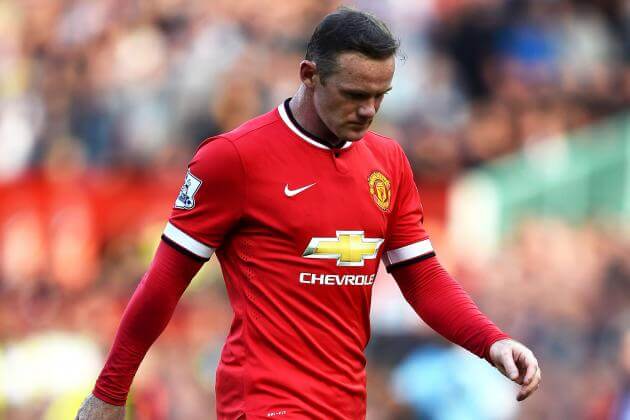 One of these weeks, we’ll have a recap where we don’t mention Manchester United, I promise. But this isn’t that week. It was a better weekend for Manchester United, despite being perilously thin at center back, picking up a 2-1 win at home over West Ham. In the process, they lost their captain Wayne Rooney to a red card in the second half leading 2-1.

Rooney scored in the first half to take his total Premier League goal tally to 175, ahead of Thierry Henry and behind only Alan Shearer and Andy Cole on the all-time goalscorers list. It should have been a great day to remember for Rooney, and then he did this.

Being physical and aggressive has always been part of Rooney’s game. He wouldn’t be half the player he is if he wasn’t full of piss and vinegar.

But he’s the Manchester United captain and the England captain. He’s 28. He should be doing a lot better than this.

If he feels the need to stop West Ham on the break by clipping Stewart Downing’s ankles, barging into him or even getting a fistful of jersey, do that. It’s a one-goal game. Anyone would understand putting a quick stop to a breakaway chance like that. He would have taken a yellow card for it, but it would have left United with 11 men on the field. Instead, he — the captain — left his team mates short a man for the last half hour of the game. On top of all that, the ref was right there and staring at him.

On top of missing the last half hour of this weekend’s game, Manchester United will be missing its captain for at least two weeks.

If I could sit down with Rooney, I’d just ask him why. Plain and simple: Why’d you do it, Wayne? There’s no good answer to that question. He should know that too.

The only correct answer to that question is that Rooney couldn’t ignore whatever it is inside him that said “kick him good and hard in the thigh” even though he knew better. 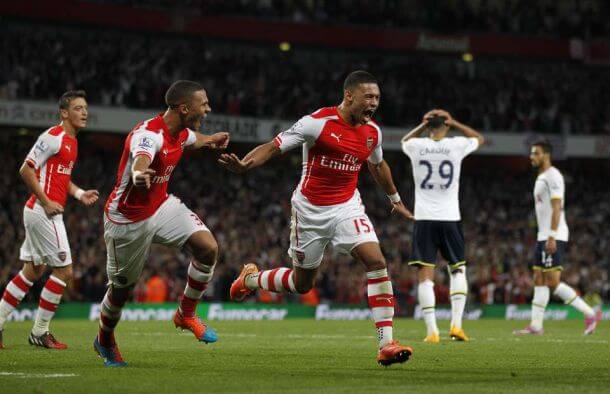 What Do We Make Of Arsenal?

After a 1-1 draw in Saturday’s North London Derby clash with Tottenham Hotspur, Arsenal has now pushed its unbeaten start to the season to six games. Don’t let that record fool you. The Gunners have won just twice so far and, aside from a three-minute span against Aston Villa last week, haven’t played all that well.

The question becomes, is this a team struggling to perform or one still finding its identity? Some signs point to the latter. Mesut Ozil is rounding into form after — how should we put this — an eventful summer. New signings Alexis Sanchez and Danny Welbeck have played both on the wing and in attack for Arsene Wenger, but he hasn’t decided who is the better fit for which position. Injuries to Olivier Giroud, Mikel Arteta and Aaron Ramsey, who left the game Saturday in the first half, certainly haven’t helped the cause.

But depth has been Arsenal’s issue over the last eight seasons or so. The club’s midfield is a perfect example. Jack Wilshere, Ramsey, Ozil, Santi Cazorla and Sanchez are all world-class players. Alex Oxlade-Chamberlain is not far behind. The trouble is, they play with a similar mindset without cohesiveness. All of them want to score pretty goals. They just go about it differently. Wilshere and Ramsey want to run at entire defenses. Ozil and Cazorla like to float around, knocking the ball to one another in 10-foot increments. Sanchez likes to dance. The result is often ugly, always frustrating, rarely satisfying. Ask a Gooner (an Arsenal fan) how he feels at this point in the campaign, and he’ll likely shrug.

Arsenal possesses enough attacking talent to threaten every team but lacks the decisiveness to bury opponents. When the likes of Chelsea, Liverpool, Manchester United (lol) and — gasp — Southampton come to town, we’ll see how the Gunners respond.

I’ll leave you with this thought. Only two players appeared in each of Arsene Wenger’s first nine seasons with Arsenal when the club won 11 trophies, including three Premier League titles. Their names? Patrick Vieira and Dennis Bergkamp. They’re exactly the type of players Arsenal needs at the moment. Then again, who couldn’t use them?

“What you got there mate?” “Just me captain’s armband. Never leave the house without it” “Oh. …Cool.” pic.twitter.com/IEch2kynZb

Sometimes, you go too far for your fandom. For example, look at this Arsenal fan from this weekend.

Part of me feels sorry for this man — either he doesn’t have friends or the ones he has all think wearing a captain’s armband as a fan is a good idea, too. The other part is pointing and laughing.

The best part of this whole picture is the guy to the right of Captain Cringe. This has to be within seconds of him noticing the bright yellow band of self-inflicted shame on his neighbor’s arm and he’s like “check out THIS dude” or whatever the British equivalent of that is.

If wearing a jersey is your thing, more power to you. Hats, scarves, other clothing, that’s just great. Wear all of it.

But don’t do too much extra. This is doing too much. Way, way too much.

I’m not very good at this here technology thing. Sure, I can get by, but I feel I’m still not skilled enough to maximize my comedic talents.

So, if someone could mix this Kyle Martino Instagram video with this song that would be fantastic.

Carden’s Goal Of The Weekend: Graziano Pelle Rides The Bike

This is a goal that came from nothing. It’s in a great spot, but Graziano Pelle took this ball and made magic.

It’s amazing to think that this was his plan when he got the ball played into his feet like that. He literally thought to himself, “Right, gonna kick this up in the air with my right foot then jump, go sideways in the air and kick it at the goal.” That’s what separates us from them — sometimes it all pans out for them like that.

Center backs don’t usually do this. Phil Jagielka’s strike to level the Merseyside Derby at 1-1 put a stamp on one of the best rivalries in soccer. Steven Gerrard’s free kick to open the scoring was also quite nice, but this goal put Carden in the bath tub. For that reason, it gets the nod.

We’ll see you next week.

One Reply to “Wayne Rooney Sees Red: The 6 Things That Mattered This Weekend In The Premier League”

Wayne Rooney Sees Red: The 6 Things That Mattered This Weekend In The Premier League