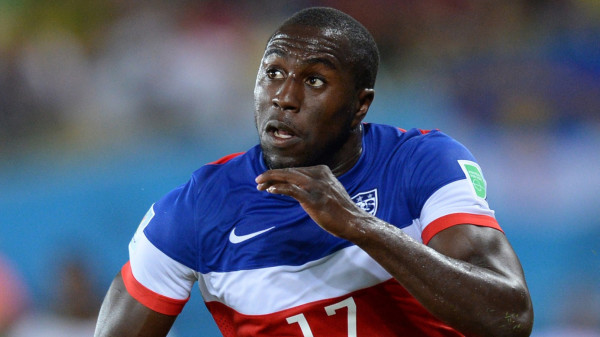 In the weeks and months leading up to the World Cup, there was one goal for the USMNT: survive one of the two (three? Italy and England got unceremoniously dumped by Costa Rica and Uruguay) groups of death in this World Cup.

We’ve escaped from that four-man brawl of a group by a slim margin. (Thank you, Cristiano. I hate you, in all your perfection, but thank you.)

Now comes Belgium, a country with a population smaller than that of Ohio and 1/3 the size of California.

And they’re two spots ahead of the US in the FIFA World Rankings.

The United States will not be favored in this game. But neither was Costa Rica in any of their group games, and nor were they yesterday against Greece. They’re on to the final eight.

The World Cup isn’t about being better. It’s about winning however the blue hell you can. You damn near saw Algeria do it to Germany today–defend with as many men as you can and make the most of your chances. Had Germany not had a übermensch in goal, we’d all be talking about this game as one of the greatest upsets in the history of the World Cup.

The gap between the U.S. and Belgium is not as broad as it is between Algeria and Germany, but the theory is the same: play smart, defend as hard as you can as a team and shoot your shot, if and when it falls to you.

To do that, you can’t be scared.

That’s something this team knows all about.

Right, so our No. 9, our top striker and focal point of our offense–Jozy Altidore is back. How back is he? Only he knows.

Being cleared to play and being ready to play a full 90 or 120 minutes are completely different things. I hope that he’s being honest with himself, with Jurgen Klinsmann and with the U.S. training staff when he tells them how he’s feeling. There is a lot riding on this for a lot of people, and I understand the desire to get back onto the field to help his team how only he can.

He does give us the best chance to win out of all our forwards at the moment. Or he could put the U.S. at a severe disadvantage if we have to sub him off early.

With that said, we’re on borrowed time. Anything from here is beyond the realistic expectations of most U.S. soccer fans after the groups were drawn.

I say give it a shot. Jozy has done enough for the USMNT to deserve a chance. He deserves more than the time he got against Ghana in this World Cup.

IF I WERE KLINSMANN…

There are two things I’d be doing if I were Jurgen Klinsmann tonight in Brazil: I’d be having a panic attack, and I’d be trying to out-think myself, which would wind up with us running a formation we’ve never run before. (I’d go 3-5-2 with Omar Gonzalez, Matt Bessler and Geoff Cameron at center back; Damarcus Beasley and Fabian Johnson as wing backs; Jermaine Jones and Kyle Beckerman as holding midfielders; Michael Bradley slightly ahead of Jones and Beckerman; then Clint Dempsey playing off of Jozy Altidore up top.)

But one thing I’d seriously consider in the round against Belgium, especially if the USMNT goes down in the second half, is using Julian Green.

I think he’d cause matchup problems with Belgium’s defense, who will likely be without their leader and captain, Vincent Kompany.

Almost all of the backs that have featured so far for Belgium play center back almost across the board at their club teams year-round.

They’re big, they’re bulky, and they’re not always so comfortable out away from goal and away from help.

So imagine it being the 75th minute, you’re tending a one-goal lead and you see an 18-year-old, quick and shifty, trotting onto the field. His legs are fresh because he’s played a grand total of zero minutes this World Cup. He’s 18 and can run forever.

I’d like to see the kid go. Klinsmann brought him for a reason, and I’m hard-pressed to see any other time to use him in this World Cup.

The problem is Green doesn’t have too much experience on even a medium stage and this stage is the biggest of them all.

Belgium should be way better than they have been at the World Cup. This is a good and a bad thing.

Maybe they’re not used to playing in heat like this. Maybe the pressure is getting to them. Maybe they’re really missing Christian Benteke, who is out because of a ruptured Achilles tendon.

Or maybe they’ve just played a string of bad games and they’re about to have a good one.

Belgium played the US in a friendly match this May year and won 4-2.

This isn’t the same Belgian team. No Christian Benteke at striker is a big deal because Romelu Lukaku has not been an adequate replacement thus far in the World Cup (he’ll score four because I said that).

Also, teams are more cautious in the World Cup. The only thing at stake in the friendly match was FIFA rankings.

Don’t look at that game before this one. It’s going to look way different.

He really does. Look.

I’ve been calling Belgium “Team Manmode” all throughout the tournament, because they’re freaking huge for soccer players.

Big-ass soccer players are kind of an oddity. Even Clint Dempsey looks like he’s a pretty tall dude on the soccer field, and he’s 6’1.

Fellaini, a midfielder, is 6-foot-4, as is defender Vincent Kompany. Lukaku is 6’3.

Klinsmann is going to be very aware of the threat from free kicks, likely to be sent in by Eden Hazard. He should go with Omar Gonzalez in defense to shore up the back line against free kicks. Having Jozy would help here as well, because he’s pretty tall and good in the air.

I don’t think there are going to be a whole lot of goals scored in this one. The USMNT is going to have their hands full defensively, and I don’t think they’ll make too many endeavors forward.

Saying this game will be physical doesn’t do it justice. These two teams are the least afraid to bang in this tournament.

I think this is a one-goal game.

Clint Dempsey in the 88th minute.

6 Things You Need To Know Before USA Vs. Belgium

No Class Friday In Search Of Soccer In New York City