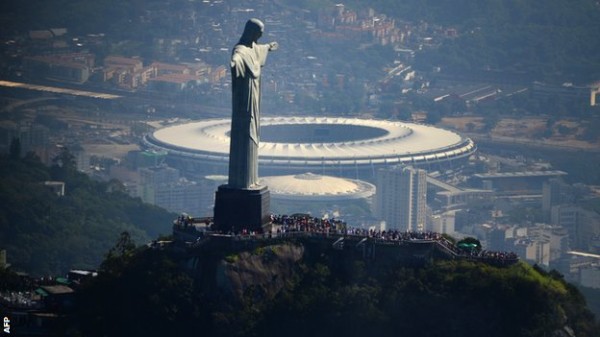 Yesterday's World Cup final, Germany's 1-0 win over Argentina, was the culmination of 63 other games featuring the best soccer teams in the world.

What led up to the tournament's outcome often gets lost as time passes, the moments of brilliance and heartache before the winner hoisted the trophy. Those moments get muted for the sake of being concise or for the blunt point that those other 31 teams didn't win it all.

But we were just treated to the most thrilling World Cup in decades. I can't remember a tournament, or any other sporting event, being this fun and dramatic from start to finish.

We here at TSFJ have put together a few lasting memories that we'll take from the 2014 World Cup. We hope that you enjoyed this month as much as we did. Feel free to add your defining moments in the comments section while you sit at your cubicle wondering when the next time you skip work for soccer will be.

The Moment That Would Have Set The World On Fire

Lionel Messi didn't play his best game of the World Cup in the final. That's OK. He was still very good, but just not quite up to his standard. It just happens to be that his standard is higher than anyone else's in the world at the moment.

But there was still one moment when Messi, after playing two solid hours of soccer against the best team in the world, made everyone edge up in their chairs and hold their breaths.

In stoppage time of the second extra period, Messi lined up his free kick, a little outside his usual range but not out of the question. If anyone could have done it, could have saved his team and the hopes of his entire nation to provide the definitive moment of the last month of soccer, Messi was that man.

His free kick went sailing high and wide, and all Messi could do was smile sheepishly. It was a moment that wasn't, but never forget how this tiny and bold man made you sit up and watch. That moment was his to take, but it flew off, high and wide.

Never forget edging up in your chair and holding your breath for Lionel Messi, 122 minutes into the biggest game the world will see in four years, and hoping against all odds that he would give you a moment you'd never forget. - Carden Hedelt

Everyone wanted the real Luis Suarez to stand up on the world's biggest stage. Pre-tournament feature pieces ran, and we asked ourselves if this man — built up as a caricature — would pull of his mask and reveal his true identity. The long answer is longer than anyone but Suarez can tell. The short answer? He showed himself.

Suarez played brilliantly in a 2-1 win over England. He showed his immeasurable talents. In the win against Italy, he showed his penchant for insane behavior.

Another memorable chomp, this one on the shoulder of Giorgio Chiellini, put Suarez out for the knockout stage and eight future FIFA matches. The teeth marks suggested that a caricature is sometimes the only thing we'll ever see of a player. They also came back to bite a Suarez-less Uruguay, 1-0 losers to Colombia in the round of 16. - Mark Trible

The Cup Of Tears

I remember a time when crying was anathema to the sports fan. We've mocked criers from Nancy Kerrigan, whose bat-beaten knee ended her Olympic dream, to Adam Morrison, who collapsed in tears while his Gonzaga team played on. Paul Gascoigne earned a yellow card in England's 1990 World Cup semifinal with Germany and turned on the waterworks. “The Tears of a Clown” the headlines read.

So what happened between then and 2014? In April, we watched Kevin Durant's “You're the real MVP” speech that had all of us fighting the sniffles. Now we just witnessed a World Cup where “crying human” was second only to “hot girl” in camera time. Fans cried. Players cried. Winners cried. Losers cried. Few of us, Tim Krul likely among them, laughed. The World Cup is bigger than anything in sports. So big in fact, that we couldn't possibly comprehend the emotions of the tournament. It's difficult to empathize with or ridicule something you can't understand.

So when those tears fell, and oh boy did they fall, we could only observe. Julio Cesar cried before and after the penalty kicks against Chile. This Costa Rican fan wept in joy while watching his Ticos dismantle Uruguay 3-1. James Rodriguez bawled after his Colombian side was eliminated by Brazil. David Luiz comforted him and urged the crowd to cheer Rodriguez's performance, as if to say “this would be me if I had lost.” Alas, the Colombian was nowhere to be found in the aftermath of Germany 7, Brazil 1.

With the abundance of tears watering its path, Germany's win was a victory for football as well as stoicism. Then again, robotic midfielder Bastian Schweinsteiger shed a few drops as the final whistle blew. I'll be damned. To quote the great 1990s poet Ed Roland, “I laughed at myself as the tears rolled down. 'Cuz it's the World Cup I know. Well it's the World Cup I know.” - Dillon Friday

Every Hero Needs A Villain

The shock of this World Cup was Costa Rica, a tiny country whose team was destined to finish at the bottom of Group D. Most thought they'd be lucky to win a game, even score against the likes of Italy, Uruguay and England.

Instead, Costa Rica beat Uruguay, beat Italy, tied England and then beat Greece in penalty kicks, relying heavily on goalkeeper Keylor Navas and a strong defense throughout the group stage. They did the same against Holland, thwarting one of the top offensive teams in the tournament for 120 minutes and earning penalty kicks.

When the final whistle blew on regulation time, the Costa Rican fans let out a thunderous cheer. Navas had already saved them once against Greece, and this was probably their best chance to advance past Holland.

In stepped Tim Krul, the final substitution for Holland, for the penalty kicks alone. In those five spot shots, Krul correctly guessed the direction of every kick and stopped two. But it was what he did between the penalty kicks that made him memorable.

Before every Costa Rican penalty kick, he approached the Costa Rican player and talked. I don't know what he said. All I know is that he was allowed to say something to Costa Rica's penalty takers — maybe he shouldn't have been — and it worked.

Krul ended dreams for Costa Rica and everyone who had become so attached to this team. He'll probably never be welcome in Costa Rica again.

He ended a miracle run and talked his noise while doing it. You're a bad, bad man, Tim Krul. - Carden

A Star Is Born

Lionel Messi took home the Golden Ball award as the World Cup's best player and looked none too pleased. Perhaps Argentina's loss had something to do with it. Perhaps Messi thought someone else deserved the honor. Someone like James Rodriguez.

The AS Monaco attacker's statistics speak for themselves: six goals and two assists in five games. But you can't measure Rodriguez's impact in numbers alone. Colombia returned to the World Cup for the first time since 1998 looking to honor the memory of Andres Escobar and redeem the nation's reputation in world football. When top striker Radamel Falcao, who tore his ACL during the club season, failed to reach fitness in time for Brazil, it seemed Los Cafeteros were headed for a cameo appearance.

Rodriguez made sure Colombia played a starring role. He was at the point of each attack. He scored spectacular individual goals and finished off splendid team plays. Rodriguez even choreographed the celebrations that followed every Colombia score. The 22-year-old and his teammates bowed out in the quarterfinals but not before inspiring joy in millions of Colombians around the world. Rodriguez left the World Cup a hero and, upon returning home, received a hero's welcome. - Dillon

There has been an American hero in each of the last two World Cups — Landon Donovan in 2010 and Tim Howard in 2014.

Howard nearly staved off Belgium long enough for the U.S. Men's National Team to find a goal and advance into the quarterfinals, which would have been a huge success for a team that wasn't sure it would make it out of the group stages. Donovan, whose stoppage-time goal against Algeria saved a place in the knockout rounds for the USMNT, had the bigger moment.

They're two of the three biggest players for the USMNT in the last decade, with Clint Dempsey joining them as the third.

If you saw Donovan's goal, you remember where you were. With Tim Howard, you might not remember a particular save, but if you saw his performance, you had to figure you were seeing a man proclaiming that he would not be beaten that day.

But there lies the downfall of playing goalie: You can play so close to perfectly and still be only as good as your defenders. Sooner or later, you're going to get beaten. That's just how the odds work, no matter if you're having the best game you've ever played. Howard batted away shot after Belgian shot, leaping and sprawling to put whatever part of his body in front of the ball that he could.

He was good enough for 93 minutes, until Kevin De Bruyne hit one low and hard past Howard's leg.

We all thought Howard was invincible that day. Instead, he got as close as a keeper can. - Carden

One Reply to “We'll Always Have You: TSFJ's Lasting Memories Of The World Cup”