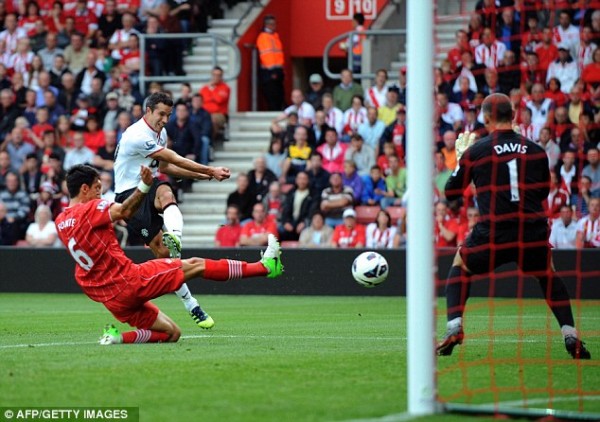 My grandfather sat in the bleachers of the Baker Bowl watching the Philadelphia Phillies race to 10,000 losses. For this reason, among others, I am a Phillies fan today. It seems I had little choice in the matter.

In fact, I would argue that most fanhood in this great country is akin to an arranged marriage. Parents choose their children’s teams at a very young age. Cruise through a recent mother’s Facebook pictures and you’ll surely find babies rocking the diaper/team t-shirt combo.

Hell, even one of my first portraits displays a chunkier, younger Dill grasping a Flyers stick. Sadly, you cant find that one on Facebook.

The point is that much of our sports loyalty comes without choice. We take teams as infants and embrace them as our own with little thought. It becomes habit.

In this country, we frown upon those who support teams purely based on aesthetics. When it comes to English football in America, these make up a majority of the fans. Premiership teams’ bandwagons like their covered ancestors on the Oregon trail can be caulked and floated across water.

This gives a Kansas City Royals fan, for example, a chance to win: “Hey, Manchester City,” the 2012 Champions, “wear baby blue - This is a match made in Heaven!” So is Robert and his mail-order bride, Svetsana. An obvious superficiality undermines the entire process.

Unwilling to sacrifice my morals as a sports fan, I remained single when it came to the Premier League. Although, there were a few flings mixed in. When the rhythmically named Jimmy Floyd Hasselbaink, he of former Chelsea glory, struck a thunderbolt for Middlesbrough against Arsenal in 2004, I adopted his Riverside club as my own. The marriage was brief. The vows state “til death do us part.” In the EPL, it’s “til relegation.” (1)

When Boro (as fans affectionately call the club) dropped to the Championship, the conjugal visits to the FA and Carling Cups were not enough to sustain our long distance relationship.

I welcomed the change. While the results of the so called “Big” clubs sullied the moods of my more invested friends, I was watching games purely for the entertainment. I could wake up with Chelsea one morning and Wolves the next.

But, as in life, being single grew lonesome. Southampton filled the void long vacated by Boro. The Saints had just completed a stunning two year stretch that saw them rise from League One in 2011 to the Premiership for this season; the rare double promotion.

It’s hardly been smooth sailing for the club thus far, though. As the Titanic will tell you, it rarely is out of Southampton. 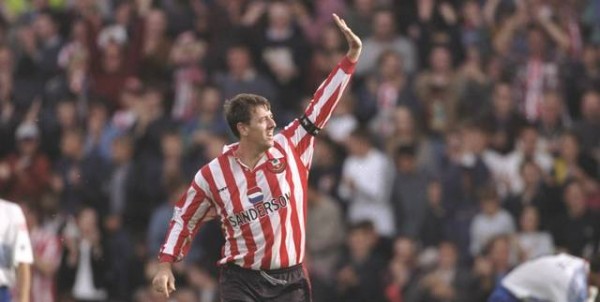 But the early struggles only further endeared the Saints to me. While I lamented the loss of the Le Tissier (Youtube Matthew Le Tissier and thank me later) red and white striped jersey, I found new heroes in solid red. Rickie Lambert’s aerial prowess appealed to the striker in me. Jason Puncheon, sporting my favorite 42, was terrorizing the flanks of opponents.

I bunkered down in the basement to watch the match with a self proclaimed “Gooner” (an Arsenal supporter, like Ed) who wanted to see nothing more than ex-Arsenal striker Robin Van Persie and the Red Devils fail miserably.

We were ecstatic when the lively Rickie Lambert headed home a lofted ball from Jason Puncheon, deflated when Van Persie equalized soon after in patented style.

Still, we came out for the second half with a point in hand at 1-1. When it appeared that the Saints were content to sit on that single point, Morgan Schneiderlin scored on a header of his own to once again grasp a lead.

For the second time in my three weeks as a fan, Southampton led a Manchester team in the second half.

Poetic justice later gave us a missed Van Persie penalty. It served only as a moment of bliss that preceded a painful demise; like a morphine shot to a wounded soldier. For the second time in my three weeks as a fan, Southampton would lose a second half lead to a Manchester team.

Our Dutch villain Van Persie (seriously we felt like Nigel Powers) poached two late goals to seal a hat trick and a Manchester United victory. Any satisfaction my friend garnered from an earlier Arsenal win quickly evaporated. He showed up with an 8 to the party. His ex showed up with a 10. The Gooner returned home to play Pearl Jam’s “Black” on repeat.

I, on the other hand, feel like I’m back in a middle school relationship- three weeks in and I’m in love… and heartbroken. They say the first year of marriage is the hardest - I’m finding this to be true.

(1) If you’re not familiar with England’s relegation/promotion system, here’s a quick primer. The Premier League is the top league in England. Every year, the teams that finish in the bottom three, 18th, 19th, and 20th, get relegated to the league below, the Championship. Simultaneously, the top two teams from the Championship plus a third that wins a four team playoff earn promotion to the Premier League. This system works throughout the English leagues, from the Premiership at the top down to League 2. All teams, regardless of division, compete in the two cups. Okay, back to Middlesbrough, my estranged wife.

2 Replies to “The Saints Come Marching In: Reflecting on Fanhood in the EPL”