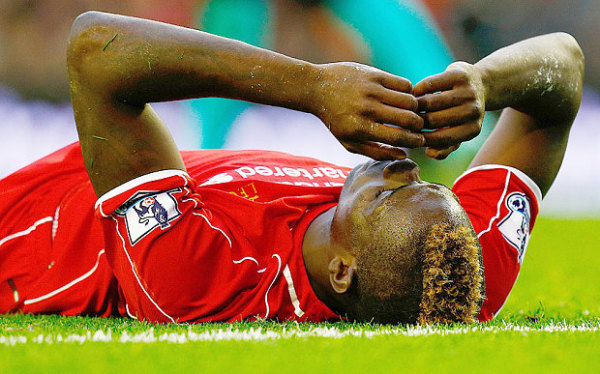 So Liverpool has a problem. They have several if we're all being completely honest, but there's one that stands out. He's the big Italian fella up front with the mohawk who can't score.

Mario Balotelli came to Liverpool this summer and has a string of bad performances to his name — one measly goal in 11 appearances. The numbers tell only half the tale, as he's been hugely frustrating as a player: missing close-range chances (two this weekend), firing high and wide far from goal, and not challenging for 50/50 balls.

Part of it is the system. Liverpool manager Brendan Rodgers has played Balotelli up top as a lone striker which has left the striker sinking deeper into the midfield to look for service, keeping him further from goal. It's something Balotelli has pointed out, in public, and said that he prefers to play with a second striker.

Balotelli got his wish this weekend in the second half, when Rodgers put on Rickie Lambert to play with Balotelli with 30 minutes left in the second half. It was as dangerous as Liverpool has looked in recent weeks but for all the danger, there were no goals, just a 0-0 home draw to mid-table Hull City.

Some Liverpool fans are already jumping off the Balotelli bandwagon. It's too much, they say. Swapping shirts at halftime against Real Madrid when Liverpool were three goals down? Horrendous! He should be doing much better in a Liverpool shirt, according to them. They say he's a disgrace and should be sold as soon as possible.

These fans do have a point. He should be doing better, and he should have kept his shirt until the end of the Madrid game at least. But Liverpool fans should want their players to succeed, especially ones the club just bought this summer.

And Balotelli is much different — bigger, not as fast and needs someone to play with him. You know, not as good as Suarez.

It's going to take time for Balotelli to settle back into the Premier League or he might not settle at all. But all Liverpool fans should be hoping that he will instead of writing him off after 11 appearances. 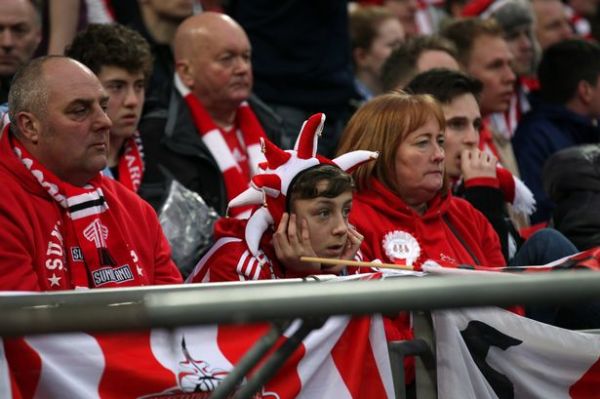 The Relegation Battle: I Googled Sad Sunderland Fans To Find That Picture

Much of the appeal of the Barclays Premier League as well as the other top circuits in Europe is that the intrigue at the bottom of the table is often equal to the top. Teams battle it out for 17th place in hopes of staying in the big time for another season.

A little less than a quarter of the way through the campaign, I think we can say the three teams at the bottom will likely stay there. Sunderland surrendered eight goals last week in a shutout loss to Southampton. This week the Black Cats shot themselves in the foot twice to lose 2-0 to Arsenal. It's hard to believe they had any foot left to shoot at.

At least Sunderland has a win, which is more than Burnley can say, the team one spot below the Black Cats in the table. Both clubs have eight points, but the Clarets, despite Sunderland conceding 10 goals the last two weeks, sport an inferior goal differential. Burnley has scored just five times in nine contests. Everton dispatched the newly promoted side 3-1 on Sunday.

Sunderland and Burnley may be headed to the dumpster, but they're far from the dumpster fire that sits in 20th place. Queens Park Rangers boast a veteran manager in Harry Redknapp and have imported talent without thought to a budget. And yet QPR is alone at the bottom with eight points. The West Londoners take on Aston Villa on Monday to try to escape the relegation zone. I wouldn't count on it.

Relegation isn't all bad, though. In the United States, the two best teams in a league meet in the championship. In England, the three worst teams head to The Championship.

My guess is that Burnley and QPR will drop after this season. Sunderland will survive yet again. In the words of Fall Out Boy, a group that once was good and now is flat-out terrible (not unlike these teams), they're going down, down in an earlier round. And sugar, they're going down swinging. 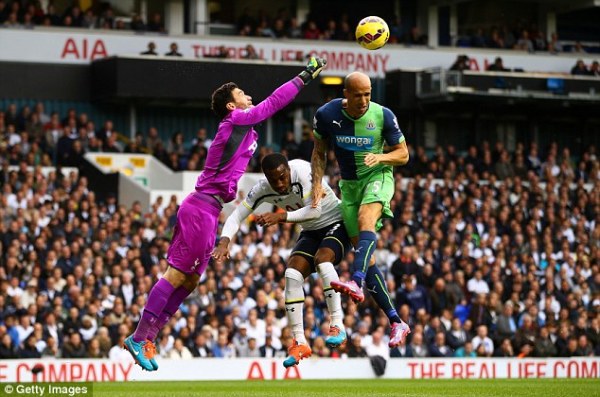 A while back my incomparable cohort Dillon Friday pointed out that Tottenham, or Spurs as their fans call 'em, are the Premier League equivalent of Clemson's football team. I've been kicking myself ever since because it's perfect. They're usually both pretty talented and seem like they should be pushing for a spot in the top of their respective sports, they'll lose in the most calamitous way possible.

There aren't more teams in the Premier League as rudderless as Newcastle. They want their manager fired, their owner to sell the team and their fans frequently voice that opinion at home games.

So, what do Newcastle do? They march right down to London and beat Tottenham 2-1 after being behind. It's Newcastle's second win of the season and their first away win since March.

The first Newcastle goal came hilariously fast in the second half. It was just seconds after kickoff, two passes and a shot. The second goal was a perfect header from Ayoze Perez in his first start in a Premier League game.

The best part? Tottenham had half an hour to get at least a goal back.

But they didn't. Because they're Clemson.

Really, the only way this video could be better is if Russell Brand sang “Inside of You” as he kissed Sam Allardyce. The English comedian/actor (and not the other way around) is apparently a huge West Ham United supporter. Who knew? Credit to Big Sam for playing along. The Hammers had just beaten Manchester City 2-1 to remain in the top four.

“Well you can see what it means to them, can't we, yeah?” Allardyce said after the smooch. Perfection.

Everton got a little more than they bargained for at Burnley. With the game drawing toward a close and Burnley bringing on men to pressure U.S. hero Tim Howard, Eto'o was the one who put it out of reach.

He receives the ball with his back to goal, turns around and picks out his spot, then drops his head down again to push the ball far to the right and past the diving Burnley keeper.

It's a good goal, his second of the game, and one that made sure Everton took home three points.

Just because you lose, doesn't mean you can't score pretty goals. They don't get much better than this from David Silva. And yes, we're fully aware that Robin Van Persie scored a very late equalizer to give Manchester United a 1-1 draw with Chelsea. We've talked about those two teams enough, though. Well, for now at least.