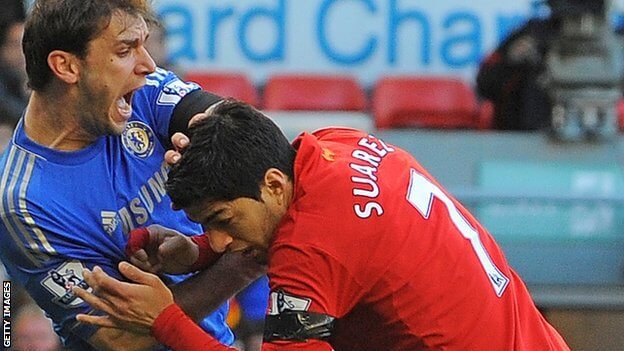 If Luis Suarez isn't one of the world's most interesting athletes, he's certainly one of its most polarizing ones. Not only does the Uruguayan possess sublime skill and finishing ability on the soccer field, but he often stirs up controversy seemingly on a whim. He lacks moral fortitude, which in most cases is an unfair charge to levy on an athlete whose personal life we know little about, but believe me when I say Suarez has earned it. His handball on the goal line prevented Ghana from becoming the first African nation to reach a World Cup Semifinal, he racially abused Manchester United's Patrice Evra, he's a habitual diver and he's been suspended twice for biting opposing players. The most recent incident, a late-season snack on Chelsea's Branislav Ivanovic's forearm, resulted in a nine-game ban for Suarez.

He has since returned to the pitch where he remains a top 10 player in the world. On Wednesday, he scored four goals as Liverpool, coming off a disappointing weekend loss to Hull City, dismantled Norwich City 5-1.

I often wonder, when it comes to Suarez, how would American fans treat him if he played in one of our major sports leagues? It seems to me that American fans have a moral conscious when we consider the behavior of our professional athletes. One need look no further than the ugly Richie Incognito/Jonathan Martin scandal to understand this. We've beaten the incident to death over use of the n word, bullying, the meaning of manhood and the difficulties of surviving in an abrasive locker room.

The consensus opinion is that Incognito should never play for the Miami Dolphins again. And, given the general public's vision of a professional athlete, he probably shouldn't.

In English soccer, it's completely different. There was no jest in Suarez's abuse of Evra. He insisted that the black left back would be a second-class citizen in Uruguay. This happened mid-match, in front of millions, not on a cell phone tucked behind the curtains of privacy. What did Liverpool do? They accepted Suarez's punishment and moved on with him. It was the same story after the striker bit Ivanovic.

And it's not just Suarez. John Terry allegedly racially abused Anton Ferdinand of West Ham United. He also impregnated his Chelsea and England teammate Wayne Bridge's girlfriend. But when that news broke, it was Bridge who left both squads while Terry remains a living legend.

I'm not saying one way is wrong and the other is right. Too often in America we look to justify our gluttonous appetite for sports by fixating our athletes with some sort of moral obligation. Indeed the NFL has a personal conduct policy and the NBA has a dress code. There's nothing wrong with entertainment for entertainment's sake.

And yet, every time Luis Suarez scores a brilliant goal or nets a hat trick, I find myself wondering how any team still employs this guy. I cringe at the praise that Chelsea fans drown John Terry in. It just doesn't seem right. But does it have to?

By all means, Canada, leave P.K. Subban off Olympic team -- The Sporting News

The Ultimate Sports Fan Gift: Your Own Personal Stadium Starting At $30 Million -- Forbes

A holiday lesson: One young N.J. athlete's devotion to his sick mother -- NJ.com

Rory McIlroy Back On Track With Win In Australia -- USGolfTV

5 Replies to “Starting Lineups: Can We Talk About Luis Suarez?”