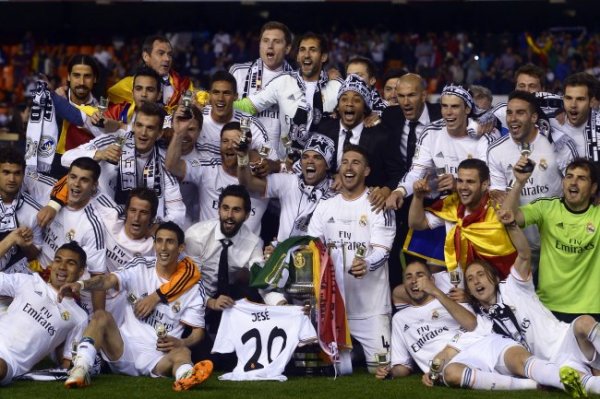 Tuesday night in Liverpool sounded like an old dream.

I wasn't there, but I was listening to the live microphones at Anfield, the home of Liverpool Football Club. They picked up a stress, an urgency that hadn't been there for years.

It was the first Champions League game at Anfield in close to five years, a period of struggle for the team.

But it all seemed to wash away, flushed after a second-place finish in the Premier League last year. The crowd buzzed before the game and sang — loudly — for five minutes straight up until the Champions League anthem and the team handshakes.

Then they sang, clear as day:

BRING ON YOUR INTERNAZIONALE
BRING ON YOUR ROMA BY THE SCORE
BARCELONA, REAL MADRID
WHO THE F_CK YOU TRYNA KID
LIVERPOOL ARE THE TEAM THAT WE ADORE

The game hadn't even started yet, and these lunatics at Anfield had already thrown down the gauntlet to three of the best teams in the tournament (Inter Milan didn't qualify this year). But this Tuesday night in Liverpool was one in the minds of their fans around the world, one that would point to an end for Liverpool's hard times in recent years. The game itself was a suggestion that they might not be completely through their hardships, a lucky 2-1 win over Bulgarian champions Ludogorets.

The luck came at the end, in the 93rd minute, when team captain and resident miracle worker Steven Gerrard converted a penalty kick for the game's final score. As far as miracles go for Gerrard, this one was relatively minor, but it hearkened back to other special weekday nights in Liverpool. This one, about 10 years ago, comes to mind (headphone users, turn it down):

Liverpool led 2-1 and needed a third to take second place on goal differential. Not only does Gerrard score a goal in the 86th minute, he scores that goal, the one that made commentator Andy Gray lose his mind. This was all en route to Liverpool's 2005 Champions League Final win, which is still the greatest sporting event I've ever seen.

It's lucky that Liverpool fans want Real Madrid in the Champions League. In fact, they get Madrid twice, because Liverpool is in the same group as Madrid. In the Champions League group stage, 32 teams get separated into eight groups and each team plays the other, home and away. The top two teams advance from each group to play in the knockout stages, a regular tournament-style setup, except that the teams play each other home and away with the aggregate score deciding the winner.

Madrid is the favorite to win the group, with Liverpool second. Madrid declared its intent emphatically with a 5-1 win over Swiss champions FC Basel.

These weeknight fixtures in Madrid have their own style of offensive wonder. The 10-time winners are not to be taken lightly.

Nobody in the world can attack like Madrid. Sure, they played a team from a much lesser league than their La Liga, but on the right day, Madrid could do this to anybody.

These games for Madrid are like parties. Their celebration is for all of soccer.

The kind of meetings that have become more and more interesting in the Champions League are the battles of the established powers versus the up-and-comers.

There were two such meetings in the first week of Champions Leauge matches: Bayern Munich's 1-0 win over Manchester City and Borussia Dortmund's 2-0 win over Arsenal.

Bayern are no strangers to this competition, having won it five times and being one of the teams to qualify for the tournament most consistently. Manchester City has become a competitor in this tournament almost overnight, after they were bought by the Abu Dhabi United Group, which subsequently dumped tons of money into the team.

Their 1-0 loss to Bayern came down to luck mostly. They looked set to earn at least a point until Jerome Boateng's late effort.

Elsewhere in Germany, Borussia Dortmund toppled Arsenal, a club more synonymous with the Champions League in the past decade than their German counterparts.

This matchup turned out to be more a mismatch of personnel. Despite being without several of their key starters, Dortmund just wiped the field with Arsenal.

We know that Arsenal has good players, but Dortmund exposed the weaknesses in Arsenal's squad, mainly in defense — Per Mertesacker might be a step slow for the Champions League and his center back position is where Arsenal is most thin — and in midfield, where Mikel Arteta is clearly no holding midfielder.

These are just four of the 16 games in the Champions League this week. All of these 16 games happened either Tuesday or Wednesday all across Europe.

There is nothing more entertaining in the sports world on a Tuesday or Wednesday afternoon than the Champions League.

If you liked the World Cup, give the Champions League a go. The games are on TV and, like I found mine, on the radio.

If you have to listen on the radio, pay special attention to the crowd. Being able to count themselves among the best in Europe is special, and you can hear it.

Take Ludogorets, for example. Their appearance at Anfield was the team's first ever Champions League group stage game, and it came against a team that has won it all five times. When they drew level with Liverpool in the 90th minute, their fans sent up a mighty shout.

Their joy would fade slightly minutes later when Gerrard scored to make it 2-1, but they kept that memory and after the game was over, sent thanks to Liverpool, whose fans applauded the Bulgarian team's effort and their fans.

It was a special night for Ludogorets fans. Liverpool fans knew it, and saluted them.

"Some people believe football is a matter of life and death, I am very
disappointed with that attitude. I can assure you it is much, much more
important than that."
-Bill Shankly

One Reply to “The Special Something About The Champions League”