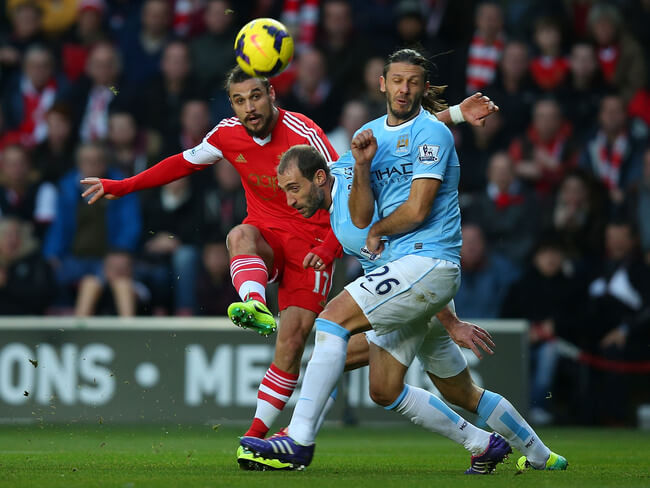 As a Southampton fan, I've been on cloud nine during this Barclays Premier League season. After enduring the nervous battle against relegation a year ago, the Saints thrust themselves into the top four early in this campaign. When they took on Arsenal in November, Southampton was in third place.

That Arsenal result though, a 2-0 defeat, was the first of three consecutive losses. The Saints took 1-0 lead over Chelsea last week before succumbing to the Blues. On Wednesday, they lost again, this time a 3-2 back-and-forth affair with Aston Villa.

Now, I shouldn't complain because Southampton is well clear of relegation, but I don't want to be teased either. The Saints have played like a top 10 team and should still challenge for a Europa League spot. Rooting for a team in the top eight is fun. The same is true for the bottom five. The in-between? Not so much.

That's what was at stake on Saturday against Manchester City, the best team in the league at the moment. Although Southampton conceded early to the irrepressible Kun Aguero, they ultimately eased my worries.

How do you end a losing streak and take points off a top two team? Like this:

Danny Osvaldo, ladies and gentleman, the player who came with the highest price tag in Southampton history when he joined from AS Roma in the summer. His performances had been disappointing prior to Saturday. Osvaldo had scored just two league goals. It's safe to say he redeemed himself.

When his curling effort kissed the bottom of the crossbar and settled into the side netting, I stifled a yell, spewing forth an unintelligible mess that sounded like a combination of Chewbacca and Sloth from "The Goonies."

Osvaldo can do nothing wrong from here on out, firstly because of the goal, secondly because he looks like Khal Drogo.