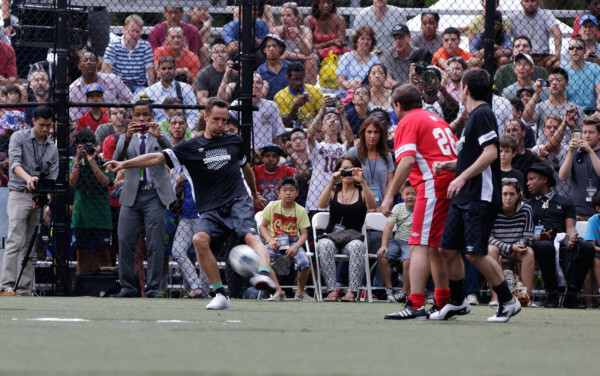 Every bar on Bleecker Street from Wicked Willy's to The GMT Tavern hung miniature flags of World Cup participants off their awnings. ESPN flashed on the flat screen TVs. The chalk board advertisements implored customers to stop by with promises of drink specials and noise. “Watch the World Cup with sound here!” one establishment boasted.

It was August-hot on a June Wednesday, proving that Brazil had invaded New York as much in weather as it did in spirit. I walked undeterred by the humidity to Steve Nash's seventh annual “Showdown in Chinatown,” a charity soccer event that has become a staple of the Manhattan summer. This year felt special.

Experts have been predicting soccer's arrival in the United States for a decade and a half as if it were an impending plague of fandom. But every four years, the sport has gone the way of swine flu, bird flu, and SARS. The fever dissipated as quickly as it arrived. This World Cup, with the advent of social media and the ubiquitous coverage provided by the World Wide Leader, has been different. Record TV ratings. Millions of tweets. Massive viewing parties. And most importantly, a United States Men's National Team that has survived death.

The beautiful game was firmly entrenched in Sarah B. Roosevelt Park. The kids of South Bronx United kicked around a ball on the fenced-in turf field prior to Nash and co.'s (Dirk! Wilson Chandler! Soccer players you may have heard of! Marc Stein!) arrival. Ken, a coach at the club, explained his role in providing “soccer for social change.” He and his coworkers not only gave the children an outlet to play the sport, but they also served as chaperones and tutors for the borough's youth. This was South Bronx United's fifth Showdown.

It was Nowitzki's first, a prospect that excited Ken.

“I should've worn my Dirk jersey,” he said.

“I hope the crowd,” which continued to grow as we crept toward the 6:40 kickoff, “boos him every time he touches the ball,” I replied. Ken returned a blank stare.

“I'm German,” said Ken as an errant pass rolled to his feet. He flicked it up and began to juggle before the awkwardness could set in.

South Bronx wasn't the only club represented; in fact far from it. The Steve Nash Foundation is “dedicated to assisting underserved children in their health, personal development, education and enjoyment of life” according to its website. Part of that includes invitations for some of New York's many youth teams. The young players, dressed in an assortment of blues, oranges, reds, and yellows, moved sporadically on the field with one eye to the park's entrance in hopes of getting a glimpse of their idols.

Led by Nash and Dirk, the evening's main attractions soon split the masses. Cameras swarmed the NBA giants as soccer's representatives at the event slipped through a throng of media. Giuseppe Rossi, a New Jersey-born Italian international, dribbled off to the side, testing out an ailing knee that kept him out of Italy's ill-fated World Cup campaign. Former Manchester United defender Jonathon Spector loafed in anonymity. NBC Sports Network's chief Barclays Premier League commentator Kyle Martino greeted me like an old friend when I approached.

“Basically, I'm 'that guy',” Martino said. “I feel like George Harrison in the Beatles. I get to go to the party and sit on the plane, but no one's asking for my autograph.”

Martino is hardly an unknown despite what he says. He boasts over 125 thousand twitter followers and invades living rooms and bars ninth months out of the year on NBCSN's highly-regarded BPL broadcasts. But the “former American soccer star turned TV personality” label only gets you so far. And that's okay with Martino.

“Flying under the radar is wonderful, because I'm going to go play soccer while they take pictures of him like he's a giraffe.” He gestured to Nowitzki who towered over the horde of reporters.

Few sports can match the NBA for star power. Nowitzki and Chandler showed as much even as they demonstrated that ball skills are not necessarily transferable from hands to feet. Dirk, at 7-feet tall, did a pretty good impression of a tree on the soccer field. His efforts in the game involved a lot of standing and launching his one shot at goal well over the fence and into the bleachers. The fans erupted, more supportive applause than Bronx cheer. We were in the Lower East Side, after all.

Chandler was arguably worse than Dirk. His attitude towards the play reflected Carmelo Anthony's, the man for whom he was traded, defensive philosophy. Which is to say, he avoided it at all costs. The few times the ball came the Denver Nugget forward's way, he calmly palmed it to the side.
“[Chandler]'s got a waiver,” Stein, the ESPN NBA reporter, joked about the former Knick's handballs. He, on the other hand, could play “a very little bit” in his words. Stein resembled a portly David Silva, of his beloved Manchester City, on the left flank, weaving through the congested pitch with surprising quickness. “This is more running than it looks like. Especially when you're not in shape.”

Stein healed in time to cover the NBA Draft at the Barclay's Center in Brooklyn the next night.

As for Nash, all the rumors are true. He showed a natural feel for the game that hinted at an alternate pro career had he picked soccer over basketball. Nash and Martino, who scored a hattrick and assisted on two other goals, led the way in an 11-7 victory over Dirk's squad. It was the point guard's sixth win in seven Showdowns.

Despite his lackluster performance, Dirk was awarded the MVP. He held the trophy, a Jean Richard watch, high above his head.

The kids returned to the field gripping sharpies, ready to sully their t-shirts for the sake of memory, if not memorabilia. 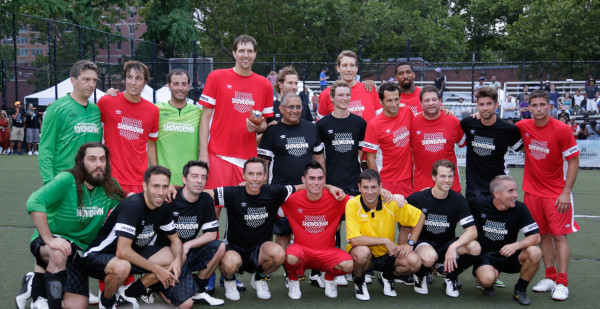 Soccer, it appears, is both everywhere and nowhere. That's the duality of the American game. As I walked away from the Showdown, I passed a series of basketball courts a block-and-a-half from Sarah B. Roosevelt Park. There was a game going at every hoop. The participants played on, oblivious to the NBAer's-disguised-as-footballers nearby. The footballers were disguised in plain sight. Dirk wins the MVP. Nash stars on the pitch.

Signs still pop up that suggest soccer's foothold in this country is not as strong as we thought, from the serendipitous--a seated Jamaican man wore a shirt with “Group of Death” across the front, a coincidence he assured me-- to the incompetent. The Red Lion encouraged would-be patrons to “Watch All World Soccer Games Here!” Good job. Good effort.

And yet this summer has felt like a watershed moment. We've not only legitimized the gimmick, we've done away with it completely. On Thursday, I watched the U.S. advance to the World Cup Round of 16 by virtue of a Portugal win and that 1-0 defeat to Germany. The hundreds of us crammed into Legends Bar spilled into the streets to chant “Best loss ever!” and “I believe that we will win!” Onlookers snapped pictures and recorded videos from the windows above. Traffic eased to a crawl in the narrowing lanes.

I recalled something Martino, a man who has seen the sport as a player, fan and analyst, told me on Wednesday prior to the Showdown kickoff. “Soccer used to be overwhelming, and it used to be intimidating, and a lot of fans didn't embrace it and didn't get involved,” he said. “Now I see some fans who fell in love with the game a year ago who have better predictions on the World Cup than I do, who are telling me what's going on. I love the community feeling of something that doesn't feel imported anymore. It feels like something genuinely American.”

3 Replies to “In Search Of Soccer In New York City”