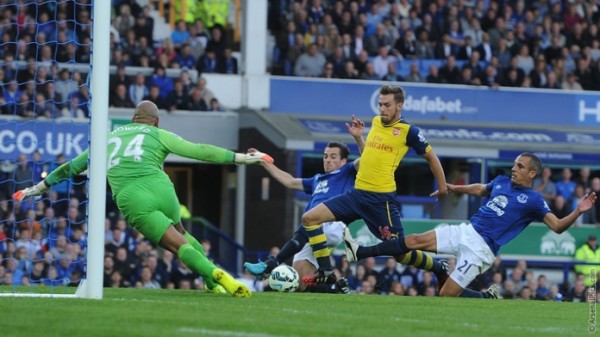 Everton was founded in 1878 so the parish of St. Domingo's Church could play football during the fall and winter. Arsenal was founded in 1886 by the workers of the Royal Arsenal in southeast London. No two teams in England have played more games against each other in the top flight. And why not? Religion and war have been intertwined on the battlefield for centuries. It only makes sense that they clash on the pitch as well.

Saturday's match found the longtime rivals at a crossroads. Arsenal, despite winning two more trophies in the last five months than they did the previous eight years, faced questions about their place in the Premier League. They looked sloppy and disjointed in a narrow 2-1 win over Crystal Palace in the season opener. The Gunners followed that result with an uninspired 0-0 draw with Besiktas in a Champions League qualifier on Tuesday. Arsenal finished fourth a season ago. Everton nearly chased them down. The Merseyside Blues are set on claiming a coveted top four place in 2014/15. They signed Romelu Lukaku to a permanent deal over the summer. Prized winger Christian Atsu came over on loan from Chelsea. Roberto Martinez instilled a confidence in the club that even the venerable David Moyes couldn't reach at Goodison Park.

For 82 minutes on Saturday, Everton looked like a Champions League side. They led 2-0 and had the suspect Arsenal defense scrambling throughout the game. Martinez out-managed counterpart Arsene Wenger. He played Lukaku on the right wing. He deployed Steven Naismith as the front man in his 4-3-3 formation. He restored Seamus Coleman to the right back position. All three were involved in Everton's two goals. Coleman scored the opener, while Lukaku fed Naismith, who was offside on the play, for the second.

A third for Everton looked far more likely than a first for Arsenal. But then the Toffees eased off the gas a little bit. Aaron Ramsey snuck into the six for a tap-in in the 83rd minute. Olivier Giroud, who came in for Alexis Sanchez at halftime, headed home the equalizer as the clock approached full time.

Arsenal stole a point and, maybe, firmed up its place as a top four team. The Gunners clearly need work, but they've escaped with four points from two games where they did not play well. Everton can't say the same. The Toffees have lost three leads in the first two weeks of the season. Against Arsenal, they should have run away with the result. Instead, they're ruing the missed opportunity. In the Premiership — let me rephrase that — in the deepest Premiership in memory, you can't drop points and reach the Champions League.

Olivier Giroud: Hey, Don't Write Yourself Off Yet 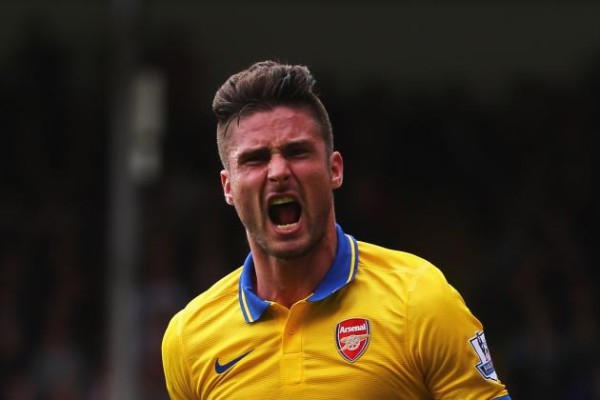 People seem to be divided on the effectiveness of Olivier Giroud. Some love him for his aerial prowess and ability to hold the ball up for oncoming midfielders. Others feel that he wastes far too many chances to be considered a world-class striker.

I know two things. One, he scored a superb header to give Arsenal a 2-2 draw with Everton on Saturday. Two, with his coiffed hair and range of facial expressions, he resembles the lead singer of an emo-punk band. In fact, he looks an awful lot like Jimmy Adkins, frontman for the excellent Jimmy Eat World. So I've taken the liberty to match Giroud's faces with some appropriate Jimmy Eat World lyrics. Are you listening? 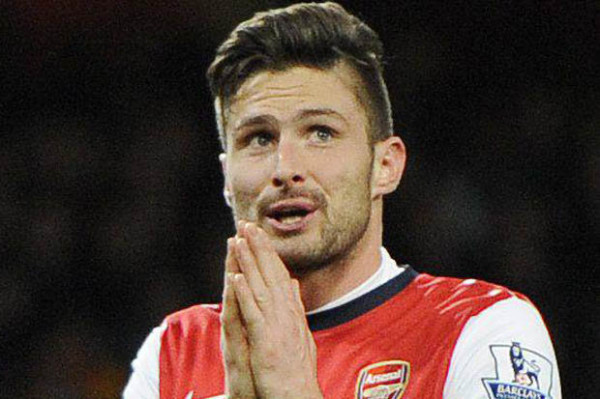 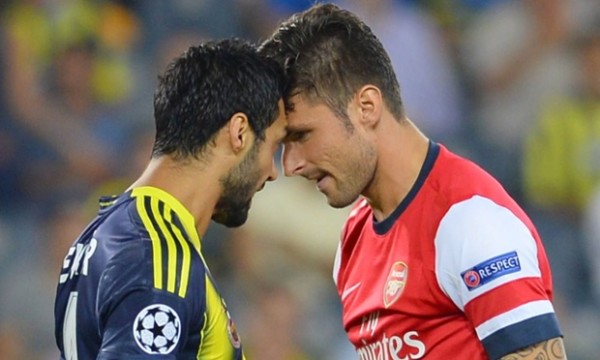 "I always pick a fight I know I'm sure to lose. So how can I not hold my hope for you?"- from "I Will Steal You Back" 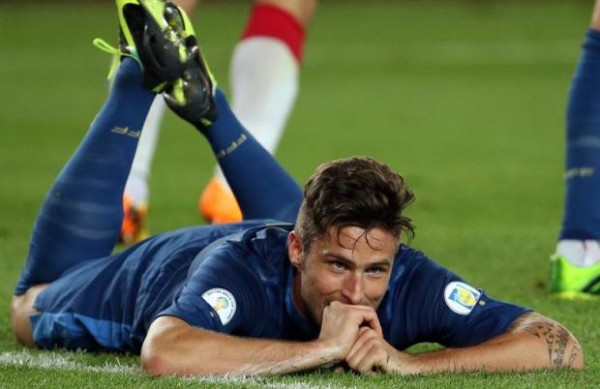 "Well you're just across the street. It looks a mile to my feet. I want to go to you."- from "Kill" 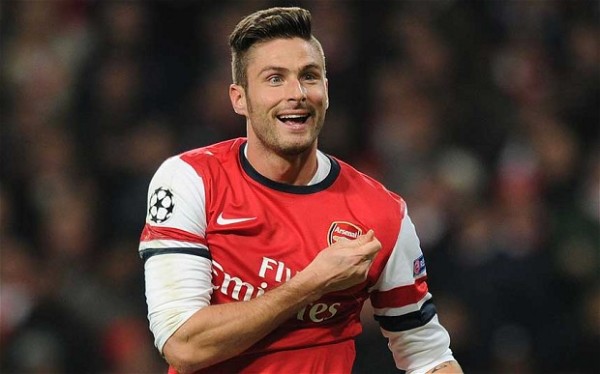 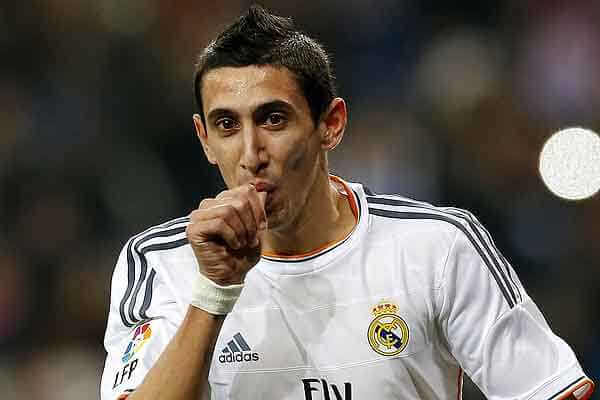 It's almost guaranteed that, whatever the transfer fee Manchester United winds up paying for Real Madrid winger Angel di Maria, it's going to be the most any team in the Premier League has ever paid for a transfer.

If you're not up on transfers, or how players switch teams permanently in soccer, this is loosely how it works: Team A wants to buy Player X from Team B. The teams haggle, agree a fee and the player gets to negotiate his contract. If it all gets agreed, Player X will transfer to Team A from Team B, who gets to keep the money. Sometimes other players get used as makeweights in deals, but it's usually just a matter of agreeing on a fee during one of the two transfer windows (players can switch teams permanently in the summer and in January only).

Depending on what British news outlet you're willing to believe (their standards of reporting are interesting), di Maria will cost United somewhere between £52 million and £60 million. The old record was £50 million that Chelsea paid Liverpool for Fernando Torres.

Hand-wringing from just about everybody follows such a massive transfer like this. The newspaper columnists get their hot sports takes in, the manager justifies it and usually a few former players weighs in. And since every transaction has a dollar amount next to it, the criticism or praise fluctuates with that number. The price of this deal will follow di Maria through his performances for Manchester United and ultimately have some value in deciding whether or not his time at United was a success or failure.

That's always seemed a little unfair. A lot of di Maria's success hinges on players around him. The problem with Manchester United is not currently their attack, which di Maria will supplement nicely. He'll need good service from the heart of the United midfield and from the defense as well, both of which are significantly weaker than United's attack. I just can't help but picture di Maria standing on the United side of the midfield stripe and looking toward his own goal as stronger teams control possession against United.

That price tag, set by the business side of United and by the market this summer, could haunt di Maria until United better addresses its other weaknesses going forward. 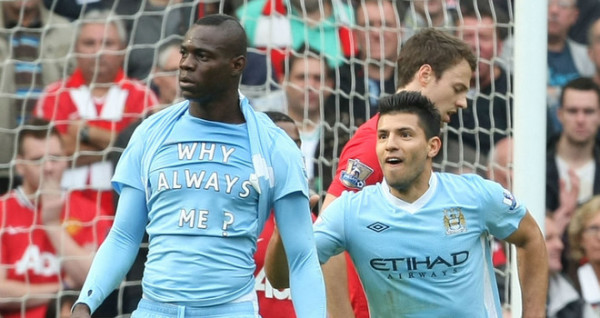 You're a Liverpool fan, and your team is about to sign somebody new, somebody exciting.

So you've got a few options.

A: Call your friends and chat quickly, giggling like schoolgirls at how much fun it's going to be to cheer for Balotelli.

B: Turn your excitement inward and go down the Mario Balotelli YouTube rabbit hole. (Ed note: I've already done this, and the best video you're going to see is this one for the story that current Chelsea manager Jose Mourinho tells about Balotelli when they were both at Inter Milan.)

C: Go to the Liverpool training ground shirtless, with Balotelli's signature "Why always me?" quote scrawled on your back in Sharpie, and complete the ALS Ice Bucket Challenge in front of the vehicle you presume Balotelli to be in when it's trying to leave the facility. Don't forget to flex!

Despite all the ice, this Liverpool fan cannot chill.

Without any highlight-reel strikes from the weekend, I've used this space to instead showcase the performance the Spurs put on Sunday against Queens Park Rangers. Nacer Chadli grabbed a brace, Eric Dier scored his second goal in as many weeks and even erstwhile striker Emmanuel Adebayor got on the scoresheet.

Tottenham sits comfortably in first place on six points and a plus-5 goal differential. Enjoy it, Spurs fans. You know how this movie ends.

I'm a sucker for a nice volley.

The ball pops way up in the air before falling to Zarate's right foot. Believe me when I say that getting a shot on target, one with power and into the right corner of the goal, is not an easy thing to do when a ball is falling that quickly.