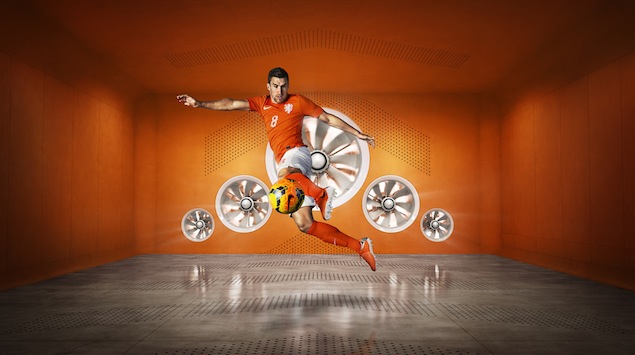 (Ed's Note: Starting from today until the end of the World Cup, we will have our  soccer aficionado Dillon Friday available to the public to answer your questions about the 2014 FIFA World Cup. If you think your question is stupid, that's okay, ask it anyway. It might be stupid, but Dillon will probably answer it. Feel free to send Dillon your questions via email here.)

Don't my beloved Oranje have the best kits?- Mark T.

If there's one thing I learned while at Hamilton College, the school I attended before being shunned as an alumnus for this, it's to be concise in my writing. Never say more than what needs to be said. So, to answer your query, Mark, yes. Yes, the Dutch have the best kits at the World Cup, and it's really not close. I'll tell you why. Before I do, though, let's round out the top five.

2. Croatia: Checkered and brilliant, the rare jersey that breaks convention and succeeds.

3. Brazil: A beautiful combination of yellow, blue and green when the Brazilians win. A hideous ensemble when they lose.

5. Australia: I saw this away kit and fell in love.

Back to the Dutch.

Holland's ubiquitous orange benefits from tradition and time. The Dutch royal family is known as the House of Orange. It has been since 1905. From there, the color migrated to the soccer team and eventually to other sports, most notably speedskating. The Netherlands is orange, and orange is The Netherlands in a way that is completely unique. Sure, Italy is “Gli Azzurri,” France is “Les Bleus,” Spain is “La Roja,” but none of the three spring to mind as soon as someone mentions blue or red.

The timing of the kit comes from the glory days of Dutch Football, the 1970s, which coincided with the rise in color television. Mexico 1970 was the first World Cup to broadcast games in color. When the Dutch burst on to the scene four years later, the orange jumped off the screen. Compared to the standard yellow of the Brazilians, the whites of England, or the white and black look of the pragmatic Germans, Holland's kit fit right into the era — bright, lively, garish in a fashionable way and rocked by a team of men who had an aversion to barbers.

That group, led by the incomparable Johan Cruyff, revolutionized the modern game. Total Football emerged in stunning fashion. Everyone attacked. Everyone defended. Everyone wore orange. In 1974, The Netherlands fielded what is widely considered the best side to not win a World Cup. That team lost 2-1 in the final to the Germans, who, as always, spoiled everyone's fun. Four years later, the Dutch lost again in the final, this time in extra time to the host nation, Argentina.

In the process, though, these great Dutch teams created a legacy that carries to this day.

The demigod, his holiness Dennis Bergkamp, brought it to the 1990s.

And Gio Van Bronckhorst scored this cracker in the 2010 semifinal to assure us that Total Football remains.

Beautiful and timeless, like the soccer Holland plays, the kit is a cold beer in August — as close to perfection as we might experience on Earth.