Manchester United vs Liverpool was postponed on Sunday thanks to large-scale protests from Manchester United fans. Thousands of fans gathered out side the Old Trafford stadium to protest against the Glazer family, who have owned the club since 2005.

Since the announcement of the European Super League faced serious fan backlash in England, fans of many clubs have come out in protest against their owners, calling for wide spread change in how English soccer is run. For clubs like Chelsea and Manchester City, it as the first time that fans have come out against the billionaire owners who have brought them so much success.

The United fans’ relationship with the Glazers is nothing new though - and the European Super League saga has only stoked fires that have been burning for a long time. 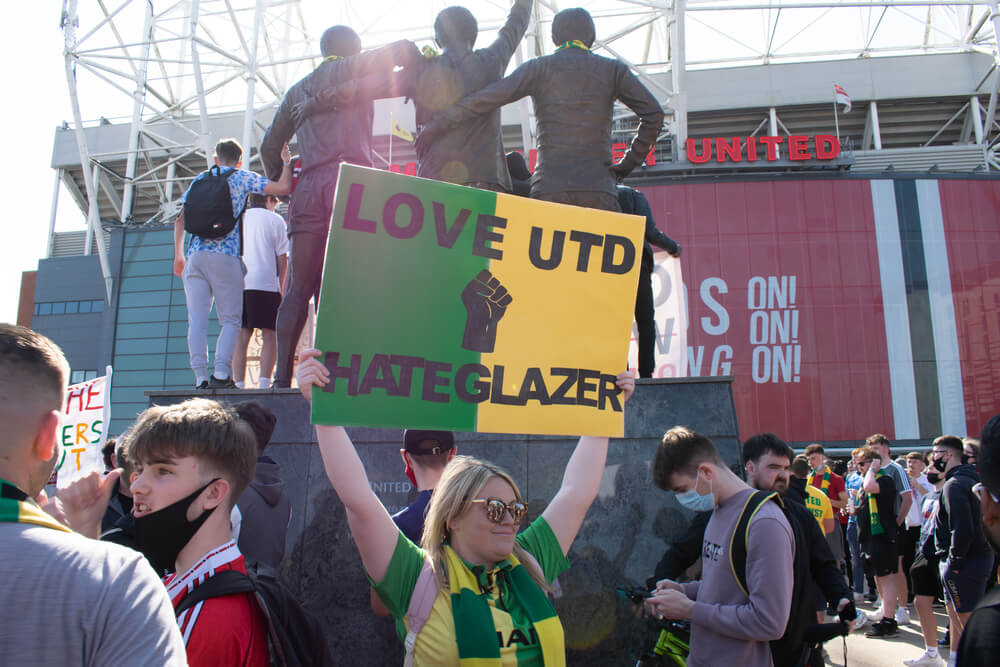 The Glazer family takeover of Manchester United hasn’t sat well with fans since it happened back in 2005. Essentially the billionaire American family bought the club by unloading their debt into it - which naturally  didn’t get their relationship with the Man United fanbase off to a particularly good start.

They’ve since taken over a billion dollars out of Manchester United, but have left the club itself in debt. As a result, the training facilities are under par compared to their closest rivals Manchester City, and Old Trafford, the Manchester United stadium, has been in need of renovation for some years.

All of the above might’ve been forgiven by some United fans, however the European Super League announcement two weeks ago proved to be the straw that broker the camel’s back. If the Glazers thought that simply by withdrawing from the competition and issuing a public apology they could quell the fan backlash, they were sorely mistaken. 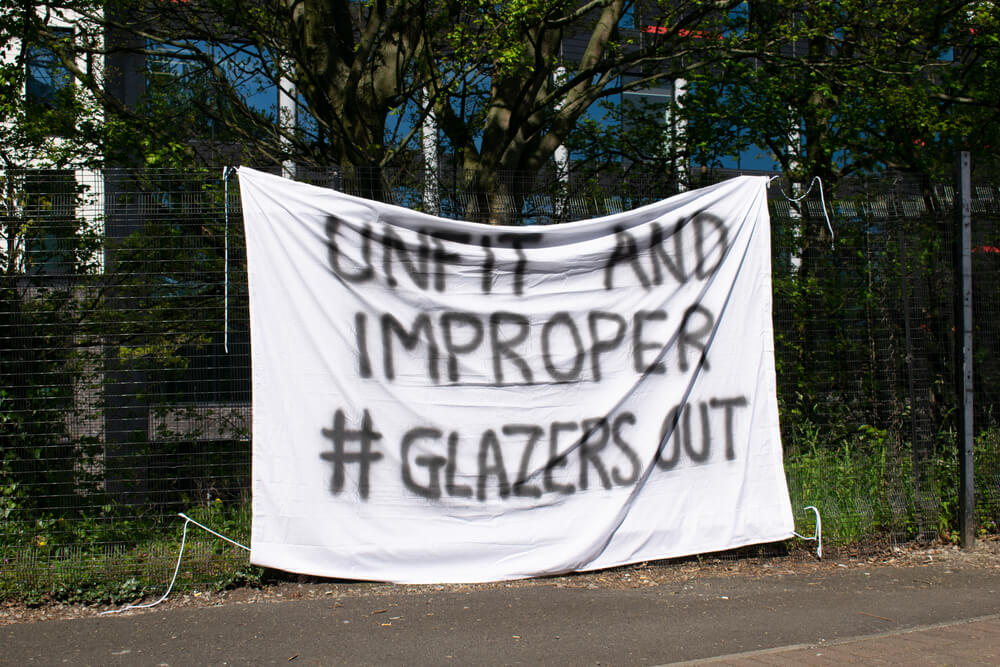 All of the above reasons have fuelled the fire of discontent that many Manchester United fans hold for the Glazers. However, perhaps the biggest reason why the Glazers have been so poorly received as Manchester United owners is their disconnect with the club and its fans.

The Glazers are viewed by a huge section of the Manchester United support as being “absentee owners”. Since taking over the club back in 2005, the Glazers, who also own 2021 Super Bowl champions the Tampa Bay Buccaneers, have very rarely actually made trips across the pond to watch their Manchester United play. More importantly, the almost never make any effort to communicate with the fans or develop any form of connected relationship.

As a result, Manchester United fans see the Glazers as a family of greedy American billionaires who are only using the club to fill their bank accounts even more.

The US Franchise Model Doesn’t Work in the UK 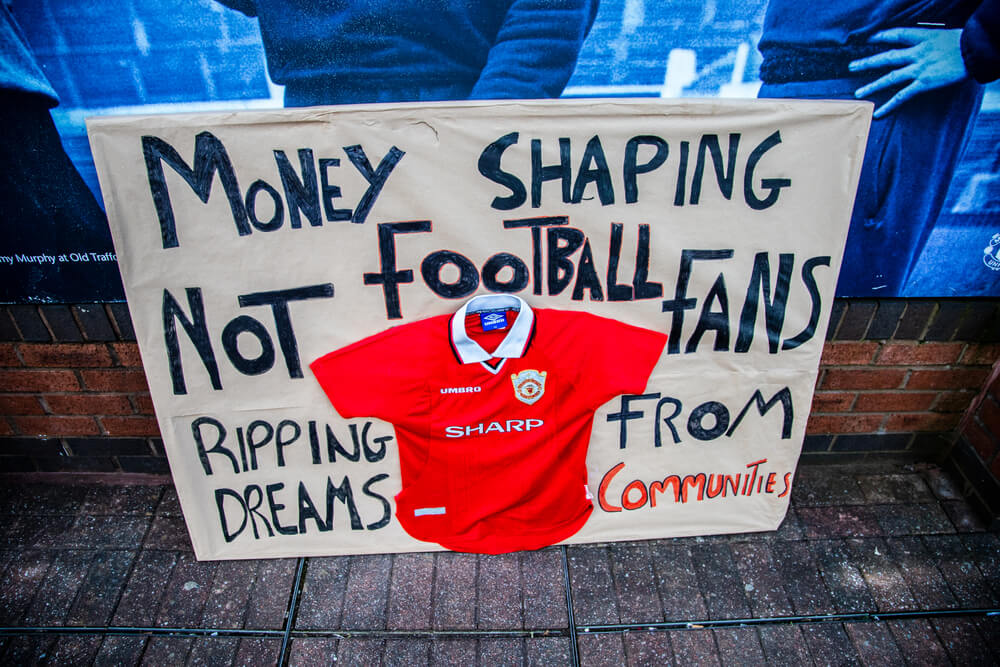 Some American sports fans have struggled to comprehend what Manchester United fans are actually protesting about. To understand why, you have to realize the fundamental difference between European soccer clubs and American sports teams.

European soccer fans view their clubs as historical situations which were built as the beating heart of blue collar communities. In the US meanwhile, sports teams are big franchises that have usually been deliberately set up in cities or largely populated areas that can generate support and ultimately a steady stream of revenue.

In the NFL, for example, three franchises have changed location since 2016. If someone even flippantly suggested moving Manchester United to London and renaming them accordingly, there would be riots up and down the country within seconds. Yet over here franchises like the Raiders can move between Oakland, LA and Las Vegas seemingly at will.

Green and Gold - The Colors of the Protest 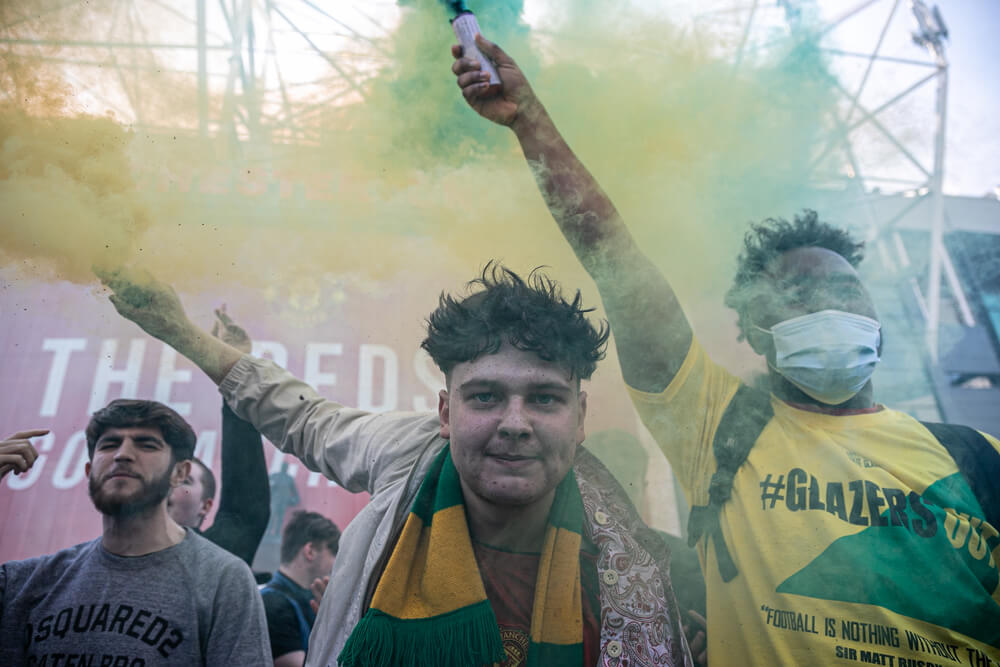 Another thing that has confused even some of the more knowledgeable American soccer fans has been the protestors use of the green and gold colors. Manchester United play in red, and have done so for over 100 years.

However when the club was first founded back in 1878, they were called Newton Heath FC and played in a green and gold kit. The original colors were first adopted by anti-Glazer protestors back in 2010, and they’ve continued to sue them ever since. Their use of the green and gold colors is to highlight the fact that the Glazers have no knowledge nor care about Manchester United as a football club, institution and pillar of the local community.

What happens next remains to be seen, but in all likelihood the discontent among this large section of the Manchester United support won’t go away any time soon until some form of change is seen to be being made. The Glazers have faced large in-stadium protests and plenty of vocal fan backlash in the past. In doing so though, they have been resolutely stubborn and have never bowed to the pressure of the fans.

Things do look a little different this time round though. There’s never been a protest of this magnitude before, and certainly not one that’s garnered this much publicity on a worldwide scale. There’s also the fact that they managed to stop one of the biggest fixtures in world soccer from taking place.

Ed Woodward is Gone, are the Glazers Next? 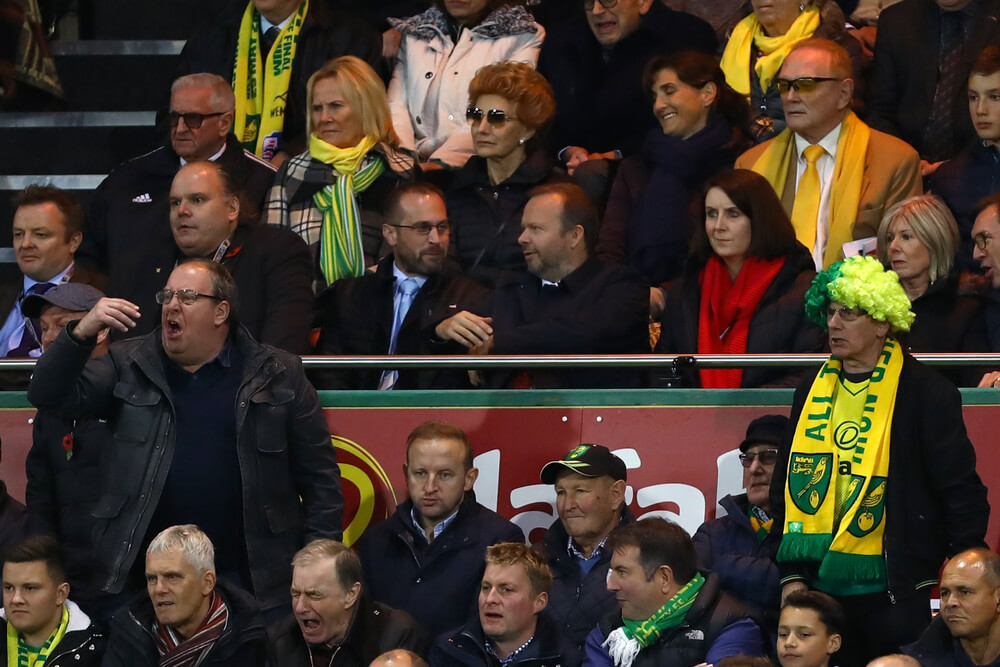 Prior to yesterday’s anti-Glazer protests, there had been several protests from Manchester United fans, as well as supporters of the other six Premier League clubs involved in the formation of the now disbanded European Super League.

Following backlash from Manchester United fans, chairman Ed Woodward resigned with immediate effect. Given that Mr. Woodward was very much seen by United fans as being the Glazer’s chairman, his departure following the initial anti Super League protests will have given many Manchester United fans the feeling that this is their best realistic chance to get rid of the American owners they despise so much.

Other English Soccer Clubs Who Want American Owners Out 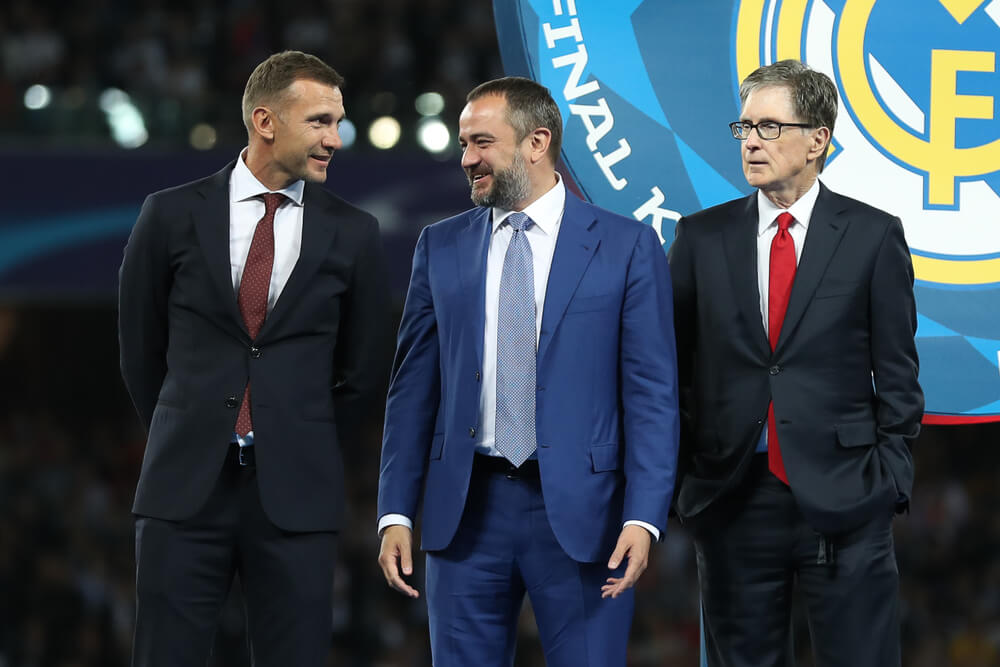 Of the “Big Six” Premier League clubs, three of them have American owners, while Burnley, Aston Villa, Fulham and Crystal Palace all have American business men as owners or playing key roles for the club behind the scenes. Alongside Manchester United being owned by the Glazers, Arsenal are owned by Stan Kroenke while Liverpool are by John W Henry’s Fenway Sports Group.

Arsenal fans can probably rival Manchester United when it comes to the contempt that they have for their American owner. There have been fan protests calling for Kroenke to sell for well over a decade now, as he has increasingly underfunded the club and run it much in the same way as he does the NFL, NBA and MSL sports franchises that he owns.

Do Arsenal Have a Chance to get Kroenke Out?

Manchester United fans might be very vocal about wanting the Glazers out, but there appears to be no solid successors or plan about who could take their place. Many fans are calling for English soccer to replicate the German system, where soccer clubs have to be at least 51% fan owned. While a good idea in theory, many football and business experts have said that the transition to such a system would be near impossible.

Arsenal on the other hand, do have a possible successor to Kroenke lined up. Spotify owner and Arsenal fan, Daniel Ek, has secured the funding and has want to put a “very compelling offer” in front of Koenke. Daniel Ek, who’s originally from Sweden, is being backed by Arsenal legends Thierry Henry, Patrick Vierra and Denis Bergkamp as he attempts to take over the club. Stan Koekene though, insists that he doesn’t want to sell.

What About Liverpool and John W Henry?

Unlike the Glazers and Stan Kroenke, John W Henry as a bit more credit in the bank with Liverpool fans. He was responsible for bringing in manager Jurgen Klopp, who is adored by the Liverpool support. He’s also financially backed the manager to bring in the players he wants, ultimately helping Liverpool to win their sixth Champions League trophy and, crucially their first Premier League title in 30 years.

Henry’s decision to enter the European Super League didn’t go down well at all with the Liverpool support, but he was the first owner of all clubs involved to release a public apology to the fans by way of video message, which you can watch below. Some Liverpool fans feel that the apology was too little, too late, but overall there isn’t as strong a feeling of animosity towards Henry from the Liverpool support.

What Does the Future Hold For English Soccer?

It’s difficult to say what exactly will happen, but one thing that seems certain is that the fans are going to get a lot more say. Money had been taking over the game for some time, but the ill-fated move to create the European Super League could mean that bubble is about to burst.

The American owners of clubs had undoubtedly been hoping that a franchise style system, like we have in the US, was the eventual endgame. Now though, it looks like the fans will take over and have their say in one way or another. The UK government have already stepped in, and have commissioned a fan-lead review into how their soccer clubs are owned and run.

What will happen remains to be seen, but what’s for sure is that we can expect a lot of big news stories coming out of English and European soccer.

This most certainly isn’t going away anytime soon! 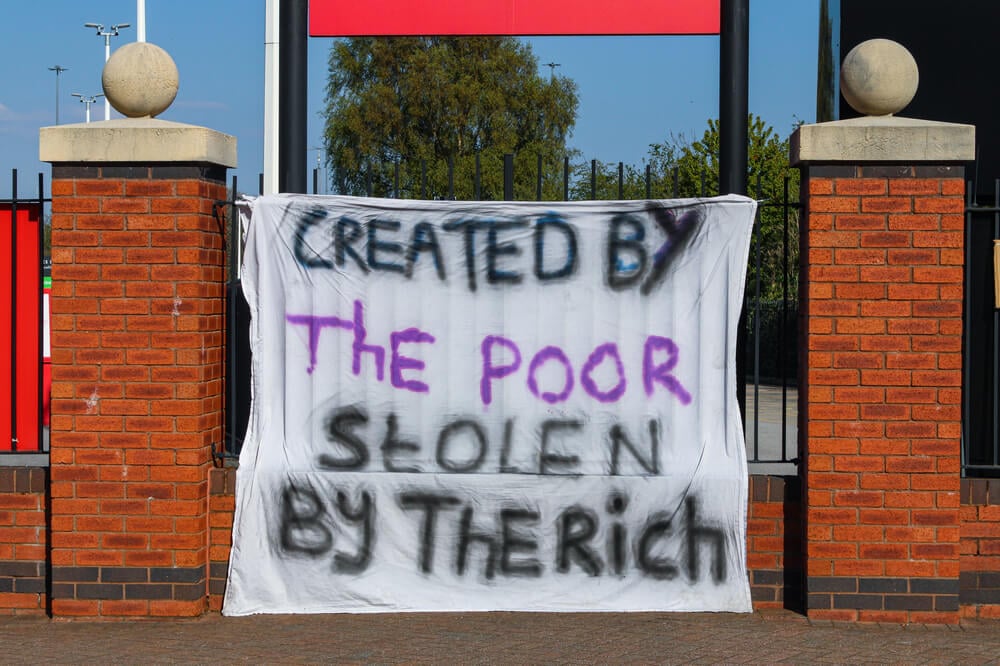