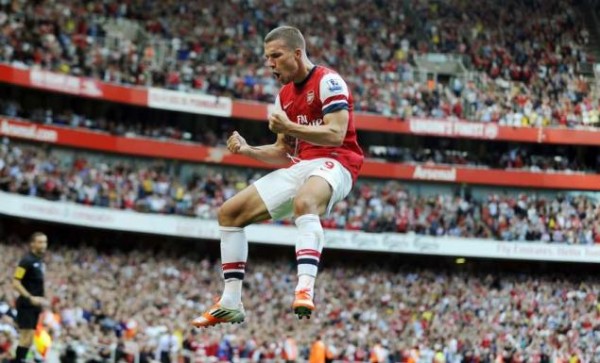 You know how Atlantans (Antlantites? Antlantians? What’s someone from Atlanta called?) torched their city before General Sherman showed up and finished the job? That’s basically what Southampton did Saturday when it visited Arsenal. Yes I just compared the fourth Premiership game of the season to the Civil War. It’s a perk of having the keyboard to myself.

Anyways, the Saints spotted Arsenal two own goals in what would become a 6-1 drubbing. You shoot yourself in the foot enough times and you’ll have no feet to stand on.

Let’s not take anything away from the Gunners though — they did some serious shooting themselves. When German attacker Lukas Podolski stepped up to take a first-half free kick, Arsenal fans including our own “Ed the Sports Fan” held their collective breath. The set-piece would have been recently exiled striker Robin Van Persie’s to take in past seasons. This was a changing of the guard moment: one left footer exits the club, another, Podolski, comes in. Could Arsenal really survive (survive  is used liberally here to mean finish in the top four) without the lethal Dutchman?

Podolski answered with an emphatic yes. He unleashed a curling rocket that found the top corner of the net, evoking, but probably not singing, Annie Oakley to an absent Van Persie.

The German’s second goal in two games sent the Emirates faithful into a euphoric mix of elation and relief. For that reason, combined with the shear beauty of the strike, Lukas Podolski takes home goal of the weekend honors.

5 Replies to “Goal Of The Weekend: Lukas Podolski Says 'Robin Van Who?'”