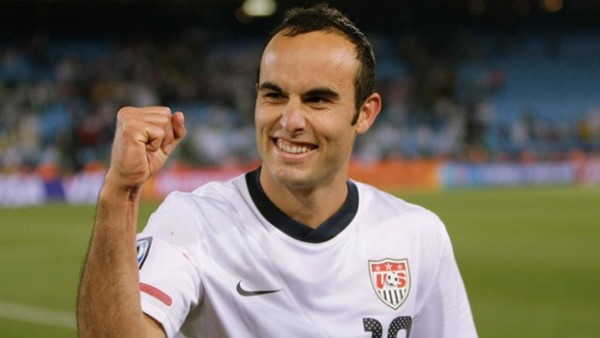 I can’t help but feel good for Landon Donovan. He announced yesterday that he's retiring at the end of the 2014 MLS season.

The duties of a professional soccer player — and carrying his sport's hopes and dreams of his nation for the better part of the last decade — have worn on him, and now he can rest.

There haven’t been a whole lot of athletes who have spoken as candidly as Donovan about being in a state of mental fragility and acting positively upon it. In 2012, after going out on loan during three of the previous four MLS offseasons, he started to talk about wanting to take a break from professional soccer. Twice he went to Everton and once to Bayern Munich to play in the winter.

And then he did it. He stopped playing soccer because that’s what was right for him. In his time off, he attended therapy and spent time meditating. Upon his return to the sport, he argued that he was going to be much more effective after taking time than he would have been if he took no time at all.

Donovan got crushed for it.

His break from all competitive soccer was probably what cost him his spot on the U.S. Men’s National Team for the 2014 World Cup. But he had to know that going into it, right? Taking months off and missing training with the USMNT, which is hard to come by, in the build-up to a World Cup? That had to have ended his shot right then, right?

Mind you, Landon Donovan has been playing soccer competitively for most of his life and the World Cup is the summit for all competitive soccer. And for the better part of the 2000s, he carried the hopes of the USMNT with him. He wasn’t always the best player, surpassed by Tim Howard and Clint Dempsey among others, of late, but his was the face of the USMNT.

He wasn’t always captain, but that team always belonged to him. And he had a lot to do with its successes over the years with 57 goals and 58 assists to his name in 156 appearances. One of those goals just so happens to be the greatest goal ever for the USMNT.

Not only was he the face of U.S. soccer abroad, he was its face at home too. He’s been a consistent performer for MLS, its all-time leading goal scorer (138) and winner of five MLS Cups among other individual and team honors.

Donovan isn’t done with the sport, not by a long shot. In his retirement statement, he pledged his support to MLS and to the USMNT, to help soccer grow in the United States. He’ll set more of his own schedule, and he’ll be out of the spotlight, which always seemed to bother him.

I think he’ll continue to play, and that he’ll start to enjoy the game more than in recent years. I think that his games will look more like this when he was on his soccer sabbatical than anything professional.

I hope this generation's hero of American soccer can better enjoy the beautiful game, which has consumed his life up to this point, in its purest and most innocent forms. I hope he's free of whatever ills plagued him to the point of walking away from it all. And I thank him for being bold enough to actually do it.