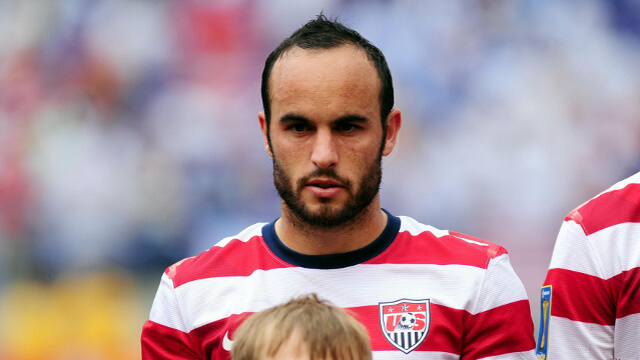 Four years ago, Landon Donovan sent America into a euphoric tizzy with his stoppage time winner against Algeria. If not the biggest goal in U.S. soccer history, it was certainly the most dramatic. Donovan's heroics gave us the rare “where were you?” moment. I could tell you the exact spot I stood when Donovan followed up on Clint Dempsey's shot. I'm sure you could too. I was at my friend Ben's house watching in his theater room. Donovan scored, Ian Darke went ballistic on the commentary, and Ben and I engaged in a jumping chest bump/hug combination.

It's the emotional power of that goal, the excitement surrounding the play itself mixed in with the perfect blend of friendship and fandom, that makes it so hard to see Donovan left off Jurgen Klinsmann's 2014 World Cup squad. Forget the 57 goals. Forget all of the assists. Landon Donovan is U.S. soccer.

As the outrage subsides, the reasoning behind Klinsmann's decision clears. Donovan hasn't scored yet for the L.A. Galaxy this season. In his last appearance for the U.S., a friendly against Mexico, he looked badly out of shape. The pace that once made him not only one of the top prospects in the United States but also in the world has waned at 32. Simply put, the Donovan of 2014 is not the Donovan of 2010. He's worn out. He's exhausted. He's lived a professional athlete's life since his late teens.

Klinsmann recognized that. His job is to put together the 23 players he thinks will give the U.S. its best chance of winning the World Cup. A half-interested Landon Donovan, who has both failed to score and reach peak fitness levels, doesn't fit that group. Klinsmann wants young talent. He wants players who will challenge the stalwarts of Group G, Germany, Portugal and Ghana, with their guile as much as their skill. Donovan once had that. He no longer does.

Following Donovan's omission, Klinsmann said, “I just see some other players slightly ahead of him.” He also called it the most difficult decision of his coaching career. I applaud Klinsmann's boldness. He was brought in to break the status quo, not to maintain it.

For better or worse, the new era of American soccer starts on June 16. Just five players who lost to Ghana in the knockout stage of South Africa will return to play the Black Stars in three and a half weeks. There should be some uneasiness. There should also be some excitement. Klinsmann has always dreamed big. His selections of 23-year-old Aron Johannsson and teenager Julian Green, an Icelandic-American and a German-American (one of five!) respectively, over Donovan invite us to dream with him. Instead of the swan song of Donovan, we'll witness the emergence of a new U.S. soccer and hopefully a world power.

And yet I still feel that leaving America's all-time leading scorer at home is a mistake. In 154 career international appearances, Donovan has scored 57 times. He's proven to be worth a goal every three matches, and that doesn't factor in his assists. At the World Cup, goals are at an absolute premium. Four goals were enough for the U.S. to win its group in 2010. Four likely won't cut it this time around. You can't afford to leave goals at home.

Ultimately, that's what Klinsmann will miss from Donovan. Promise and potential are nice things. A tangible ball in the net is far nicer.