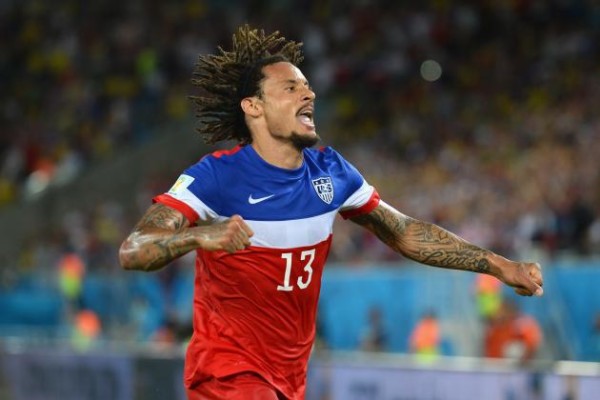 Anytime anyone mentioned Jermaine Jones in reference to the U.S. Men's National Team in the run-up to this World Cup, words like "liability" and "reckless" were sure to follow.

People say that because he was both of those things. He has always been a threat to get a yellow card because of things like this, crunching tackles that just seemed to happen without much warning.

Watch Jones in the video: He couldn't be less bothered that he got a yellow card. He was content when it wasn't a red.

Many thought you'd have to plan for a game without him playing his usual deep-lying defensive role, the armor before our soft and vulnerable core — our center backs. That thought was almost unfair to Jones, who had put together a string of appearances for the USMNT without getting yellow-carded, but that's how a reputation like that can cling with a player. Once you're labeled as reckless, that label sticks and is nearly impossible to get rid of.

But not only was he available for every single game, he played a string of four games that totally changed his legacy.

John Brooks got man of the match against Ghana but that was an "oh, congratulations you did something fancy when the odds were stacked against you — here's your man of the match" type of award. The man of the match was Jermaine Jones, and it wasn't close, as he continually shut down Ghanaian attacks through the center and left, where DaMarcus Beasley was in way over his head.

Against Portugal, he did more of the same. And then he shocked the hell out of everyone when he did this.

Goals are happy accidents for Jermaine Jones. That's just his third in 45 appearances for the USMNT. He scored seven total goals in 155 club games from the start of the 2007 season to now. For him to score a goal that good and in a game that meant that much was a very surprising and happy accident.

It came as so much of a surprise that he hit it that well, and on purpose, that he caught Ian Darke slipping on the call and flat-footed the Portuguese keeper.

It was during the Portugal game that Jones received his yellow card, meaning he was only one more yellow card away from a one-game ban should the U.S. advance beyond the group stage, which they did after losing 1-0 to Germany. Jones looked like he was asked to push forward more in this game and was not as effective in that role, but he was one of a few bright spots for the U.S in the contest.

In the 2-1 extra-time defeat to Belgium, he was again reliable defensively, while adding what should have been an assist to Chris Wondolowski in extra time.

In these four games, he was no longer a liability, nor was he reckless. Jones never lost his cool, always putting pressure on the opposition attack while adding a goal that U.S. soccer fans won't soon forget.

These four games, less than 10 percent of his appearances for the USMNT, will forever alter how people remember him. You can't erase all the yellow cards he's earned for the stars and stripes, and he might still get called reckless here or there, but no longer is he a liability. Through concerted effort on his own part, and probably a little Jurgen Klinsmann urging, he became the second-most consistent player for the USMNT during this World Cup.

Remember him for his goal, a world-class shot that should be one of the top 10 in the tournament once it's finished. Remember him for destroying Ghana's repeated attacks against a wild and flailing defense, and for saving Beasley over and over. Remember him for playing through a broken nose, still being unafraid to get stuck in on the hard tackle when the USMNT needed him most.

Remember him for being at his best when the whole world was watching, when the enemy was stronger and more focused than it ever had been, making vital tackles and setting up what could have been a goal that would have rocked the tournament.

In the games that meant everything, Jermaine Jones was not reckless. He was flawless.