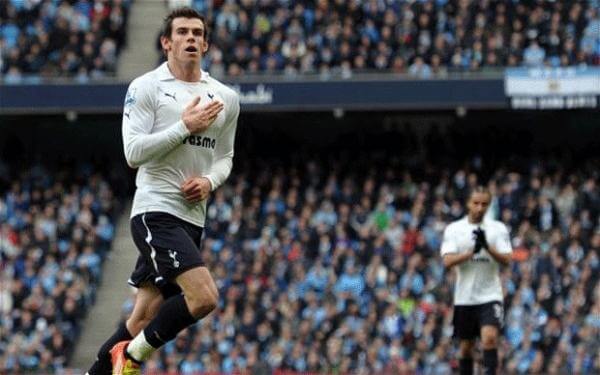 It’s a three for one Monday. Unable to choose from a trio of splendid goals, I offer all three for our loyal readers. Enjoy.

Gareth Bale is Faster than You (start video at 2:55 mark)

There is a tendency amongst commentators to compare players across sports. Tiger Woods as the Michael Jordan of golf. Roger Federer as the Tiger Woods of tennis. Maurice Richard as the Babe Ruth of hockey. It is a trope, but it is a useful trope. The analogies allow us to explain the impact of a player without being esoteric.

With this in mind, I will drift into the controversial cross-race, cross-football analogy. Tottenham Hotspur's winger Gareth Bale is the soccer equivalent of Gale Sayers. Like the Kansas Comet, the Welshman gallops elegantly down the pitch, breezing by defenders with ease. Bale announced his arrival on the World stage with a hat trick against European Champions Inter Milan in the 2011 Champions League.

Since then, he has been rampaging the flanks of London and beyond. On Saturday, he delivered a crushing second goal to send Spurs 2-0 up at Manchester United. Tottenham would win for the first time in 23 years at United’s home ground.

Poor Rio Ferdinand. The respected United centerback can do nothing but stumble backwards as Bale blows by him. It is the fear that the winger strikes in all defenders: make a move and get burned, stay back and get burned worse. The indecision proved fatal for the Red Devils.

Americans often, in ignorance I might add, transport our “best” athletes onto the soccer field. Let me offer a reversal: watch the highlight and tell me Gareth Bale can’t play in the NFL.

Say it with me: Demba Ba. Dem-ba, Ba. Those of you who have not yet formed allegiances to an English team or player could do much worse than Newcastle and their Senegalese sniper. Since he joined the club at the beginning of the 2011-12 season, Ba has routinely filled the net with highlight reel goals. On Saturday, he did it again. Midfielder Cheik Tiote floated a perfect ball over the defensive line to an attacking Ba. Without breaking stride, the lanky striker fired a volley past the keeper. I cannot explain how difficult this is. Just admire the athleticism of the Magpie. Yes, Newcastle is the Magpies.

Ba later grabbed the equalizer in a 2-2 game with the help of a hand ball. But let’s be honest: a strike as good as his first should be worth two goals anyway.


For his next trick, Luis Suarez will make a bird disappear

Liverpool’s enigmatic striker, Luis Suarez has it out for Canaries, or at least for the yellow club who uses the song bird as a mascot. Wait… Magpies and Canaries? Potters? Cottagers? And you thought “Jazz” and “Magic” were bad.

Back to the Uruguayan. For the second straight year, a Suarez hat trick sent Norwich City down the mineshaft on the road. His second goal was the best of the three. Suarez poached the ball from an oblivious Norwich defender. With his opponent still badly out of sorts, the striker split the defender’s legs with what we call here a “nutmeg.” I prefer the Italian term “insalata.” Suarez, who leads the league in insalatas by a mile, followed the elementary move with a superb outside of the foot strike.

Whether it’s routinely diving in attempts to draw penalties, saving a ball off the goal line with his hand that prevents Ghana from progressing to the World Cup Semifinals, or racially abusing Manchester United’s Patrice Evra, Luis Suarez rarely draws praise for his behavior. But when it comes to his play, there are few who are equal to the Uruguayan.

See you next Monday.