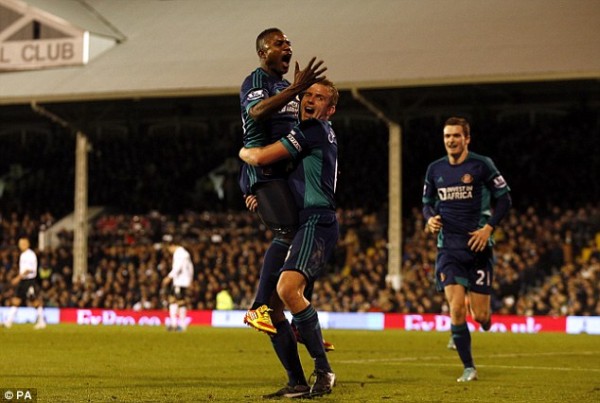 Zlatan Ibrahimovic is six feet five inches tall. He should not, nor should anybody save for maybe “Episode III” Yoda, be able to do this. Every goal from here on out will be rated 1-10 on the Zlatan scale, 10 being equal to the big Swede, one being Dill Friday vs. Cazenovia College.

Why must we always talk about Arsenal? The first quarter of their season can only be described as schizophrenic. Once the league’s stingiest defense, the Gunners have now conceded 14 goals in their last five games in all competitions. Of course, they have also scored 18 times in those games after struggling to find the back of the net in the early season.

Had Arsenal fallen at the feet of rival Tottenham Hotspur on Saturday, Gooners would’ve surely seen it as a black eye in a season full of sucker punches. Instead, it was Arsenal who bludgeoned the Spurs. The 5-2 victory serves as a harbinger of good fortune for the North London club. The attack looks suddenly formidable again. Theo Walcott and Santi Cazorla torched an outmatched and outmanned Spurs defense for 90 minutes.

Emmanuel Adebayor opened the scoring but in a moment of true madness, flew cleats up into Arsenal’s Cazorla. The Togolese striker was rightfully dismissed to the delight of the Emirates crowd. The ex-Gunner famously, or infamously, broke one of soccer’s unwritten rules by celebrating emphatically after scoring against his former club.

Arsenal’s big win was hardly the most surprising result of the weekend. West Bromwich Albion sits comfortably in fourth after turning aside early frontrunners Chelsea 2-1.

A month ago, Norwich City was bunkering down for a season-long battle to stave off relegation. Since their 4-1 trouncing away at Chelsea, the Canaries have rallied rather impressively. They’ve gone six games unbeaten in all competitions including two league home wins against Arsenal and now Manchester United.

And who dat? Who dat said dey gonna beat dem Saints? Well apparently everybody in the Premiership. Southampton entered the weekend 19th out of 20 and four points from safety. In the first relegation clash of the season, dubbed “El Sackico” with two managers’ jobs on the line, the Saints marched into bottom feeders QPR. Captain Adam Lallana was inspirational for the away side. James Puncheon returned to the starting 11 with a vengeance as well, curling a shot beautifully into the bottom corner. Southampton looked to be playing for their season and their manager. QPR, on the other hand, remains winless, hopeless and if Saturday’s game lives up to its nickname, leaderless.

The 3-1 home loss is the low point in an abysmal campaign. Temporary low point, I should say; they travel to Manchester United next.

You know who is likely feeling better about himself than anyone associated with QPR? Sunderland’s Stephane Sessegnon (Side note: $50 to TSFJ’s online store to the reader who can come up with the midfielder’s home country). Against in-form Fulham on the weekend, the Black Cat let fly from distance in his side’s 3-1 win.

It was a world-class strike from a tremendously gifted player who often plays the role of setup man rather than finisher. Sessegnon’s wonder strike rates a solid 7.7 on the Zlatan scale.

Finally, there is a new leader at the top. Manchester City 5-0 dismantling of Aston Villa sent them a point ahead of crosstown rivals United.

3 Replies to “Goal Of The Weekend: Sunderland's Stephane Sessegnon Unleashes A Firecracker [VIDEO]”