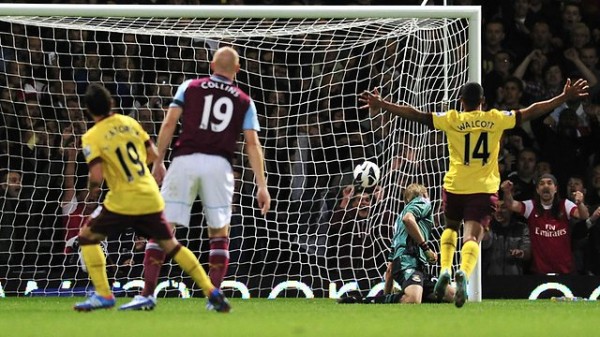 Every two years, soccer blesses us with month-long tournaments of limitless grandeur. If Americans watch soccer at all, they watch during the World Cup and its cousin, the European Cup.

It’s great advertisement for a sport that has an awkward home in America. Like the neighborhood stray dog, some embrace the foreigner, while others ignore him. You never quite know if he’s here to stay.

As your questioning the grounds of the dog metaphor, I will needlessly remind you that Spain is dominating world soccer. On the international stage, they have won an unprecedented three straight major tournaments. On the domestic level, they have Leo Messi.

When people think of Spanish soccer, they think of Barcelona and Real Madrid and their collection of homegrown stars. Their exposure during this historical run has made these gentlemen "Twitter-hold" names, if not household names.

Cazorla? He’d be lucky to be the team’s water boy.

Through Arsenal’s first seven games, however, the former Malaga fan has been nothing short of sensational for the Gunners. He’s emerged from the obscurity of a non-Clasico Spanish club to become an early favorite for English player of the year.

Cazorla has treated the Emirates faithful to deft touches and perfectly-weighted passes in the early season. Against the Hammers of West Ham on Saturday, he unveiled yet another weapon in his, wait for it, arsenal.

Cazorla’s 25-yard screamer had Gooners reacting like Boobie Miles’s uncle. The goal sealed the three points for Arsenal in this most recent London derby in spectacular fashion.

One Reply to “Goal of the Weekend: Spain’s trash (Santi Cazorla) is Arsenal’s treasure”