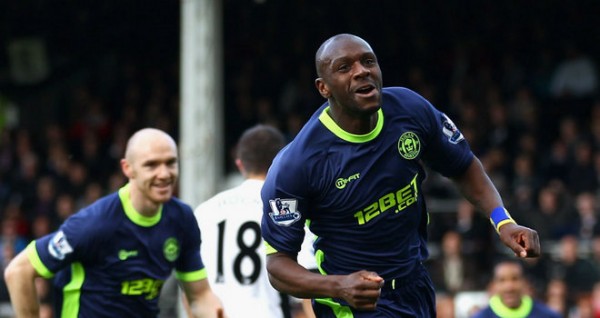 In the pantheon of great plays, the improvisational has a unique home. Improvisation doesn’t rely on context. It is the product of split-second thinking when one is presented with unfortunate circumstances. The spectacular nature of the play comes from the build-up rather than the result. The how or why trumps the it.

Soccer provides endless opportunities for improvisation because it is played almost entirely with the feet. To put it more bluntly, save for walking, everything you do with your feet is improvised. Don’t want to get up to close an open door? Improvise. Dropped your pencil during a test? Improvise.

In soccer, improvisation birthed the bicycle kick. It gave us the “Cruyff” turn and the “Panenka” penalty. This weekend Wigan Athletic’s Emmerson Boyce suggested that perhaps the “flying back-heel” should be renamed in his honor.

You know that part in “Happy Gilmore” when Verne Lundquist exclaims “What a shot by Happy Gilmore!” before asking his partner “Who the hell is Happy Gilmore?” That’s kind of how I felt when I first saw the goal.

But don’t let the defender’s anonymity take away from his effort. In an otherwise forgettable match, Boyce’s outrageous bit of improvisation provided the highlight of the weekend. It was the Barbadian’s first goal of the year. He is now well on his way to besting his career high of three, though it is unlikely Boyce will ever score in a more spectacular fashion.