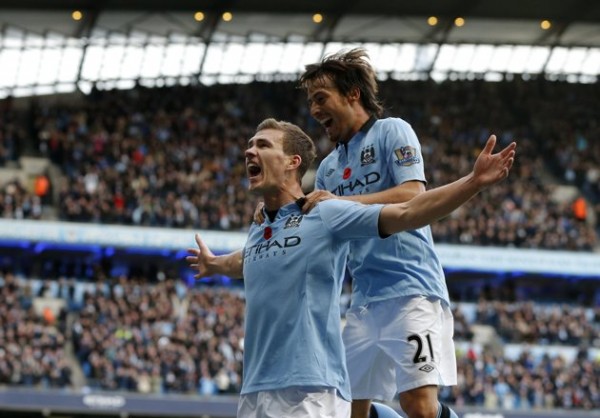 Before we get to the soccer, we’d be remiss if we didn’t dedicate a paragraph to our veterans, both American and foreign. The beautiful game, international as it is, benefits more than any other sport from the sacrifices of soldiers. Appropriately enough, Arsenal kicked off the weekend with a French-German partnership in both the back and up front. Laurent Koscielny and Per Mertesacker formed the central defense while Lukas Podolski and Olivier Giroud fronted the attack. Thank a World War II veteran while you still have the chance. The freedoms won and protected by “The Greatest Generation” are on display every day - from a voting box in Ohio to a soccer pitch in North London. We thank you veterans.

Onto the games. After surging to top of the league at the start of the season, Chelsea has now dropped points in three consecutive games. Luis Suarez equalized for Liverpool after John Terry headed the Blues in front in the first half. That’s right: Two convicted racists scored the goals, a somber footnote in a game that produced some splendid attacking soccer. Chelsea now sits alone in third.

Meanwhile, leaders Manchester United needed a frantic comeback to secure an away win at Aston Villa. Down 2-0 after 45 minutes, Manager Sir Alex Ferguson introduced Mexican striker Javier “Chicharito” Hernandez into the foray. Hernandez accounted for all three United goals. He split Villa’s keeper Brad Guzan’s legs to open the Red Devils scoring. Later, his goal-bound effort took a fortuitous deflection off a Villa defender and found the back of the net. Hernandez completed his quasi hat trick; the second would be ruled an own goal, with a trademark header in the game’s dying minutes. United is starting to look like champions.

Things look seasonally gloomy in London on the other hand. How does that one Smiths song go? Panic on the streets of North London? The denizens of the capital must surely be fidgeting with the January transfer window still months away. On Saturday, Arsenal lost a 2-0 lead to West London club Fulham in a scintillating 3-3 draw. Midfielder Mikel Arteta had the dubious distinction of both conceding and missing a penalty in the game. His 90+ minute spot kick was saved expertly by Fulham keeper Mark Schwarzer. Arsenal’s Christmas wish list of players grows longer as the weeks drag on. They are firmly entrenched in eighth place, far from adequate but indicative of their performance thus far.

The Gunners aren’t the only North London club struggling. Queens Park Rangers have yet to register a win on the season. In game 11 they fell 1-0 to Stoke City on the road to a Charlie Adam goal. QPR now sit in last place, a point behind Southampton. The two play next Saturday with serious relegation implications on the line.

And then there is Tottenham Hotspur. The Spurs made a splash this offseason by appointing exiled Chelsea boss Andres Villas-Boas as manager. AVB has instilled an attack-minded attitude in the club to mixed results. On Sunday, they traveled to Manchester City where the Blues had not lost in 34 games. The Spurs looked to break that record as they grabbed an early goal. But City proved their mettle yet again with the help of a returning star.

David Silva’s absence has been glaring in the Manchester City midfield. Last season, the Spaniard orchestrated City’s brilliant attack as the blues raced to the top spot. As he wore down, so too did the club. The grueling season took a toll on Silva’s effectiveness whose offseason was cut short, albeit in triumph, by Spain’s Euro Cup win.

Now well rested, Silva made an immediate impact on Sunday. After Kun Aguero equalized for the blues, Silva provided a maestro’s touch on Edin Dzeko’s winner.

It was the pass and finish combo that separated this goal from the pack on a weekend the lacked the spectacular. Edin Dzeko once again provided production from the bench. When he steps on the field goals soon follow.

It all comes back to Silva, though. With their Champions League hopes in the doldrums, City will now focus their attention on domestic glory. Silva is the impetus behind the effort.

As for the seventh-place Spurs, they limp into next Saturday’s clash with Arsenal on the back of consecutive losses. Both clubs desperately need wins to abate the North London panic. Meaningful games five months before season’s end - such is the immediacy of the Premier league campaign.

2 Replies to “Goal Of The Weekend: Edin Dzeko And Manchester City Welcome Back David Silva”