Tuesday, two friends and I made the trek from Philadelphia down to Washington, D.C., to take in the International Champions Cup match between Chelsea and Barcelona. It was the first soccer match I had ever experienced in person, and I will never watch soccer in the same way again.

It’s a rare opportunity to be able to watch the English champions play the Spanish/European champions, and it was one that I was thrilled to have.

After arriving in suburban D.C. in the early afternoon, we made our way into the city to grab a bite to eat and check out the sights of the capital for a bit. We wandered around fairly aimlessly, just checking things out and taking it all in. Eventually we found our way into a local watering hole for a drink and some quick food, and then began our journey to FedEx Field.

We decided to use Uber to get to the stadium, and we were glad we did. As far as I can tell, there are only a few roads leading directly to the stadium, and they were jam-packed, as were the major arteries leading to them. Luckily for us, our Uber driver used some local know-how to circumvent a large portion of the gridlock, and what could have been a nightmare was nothing more than a slight inconvenience.

With this being my first soccer match, and the fact that it was just a preseason exhibition, I didn’t know what to expect as far as the atmosphere was concerned. That question was answered before we even got out of the car.

As we crested a hill, the stadium came into view. There were four lanes of traffic all heading toward the stadium, with people honking horns and hanging out of car windows waving flags and chanting with nearby pedestrians. Every bit of open space, from parking lots to open fields, was being used for parking. Tailgaters were eating and drinking and kicking around soccer balls, and there was the constant ringing out of chants.

At this point, our driver suggested that we get out and walk the rest of the way, that he had done all he could do for us and that it would be quicker and more fun for us to continue on foot. We took his advice, thanked him, and set out in search of a place to chill for a bit and soak in the scene. Finding an open field that had yet to be completely overrun with parked cars, we carved out a little space for ourselves and had a few drinks and kicked our soccer ball around. We chatted with some fellow Chelsea supporters, exchanged chants with some Barca fans, and just took in the plethora of sights and sounds going on around us.

The time finally came to head into the stadium and for the game to start. After seeing the atmosphere outside the stadium, my expectations for inside were sky high. I was not disappointed. As we climbed the ramps to our nose-bleed seats behind one of the goals, we could hear an abundance of sounds coming from the seats. Fans of the opposing teams traded chants, and the pounding of drums reverberated throughout the concourse.

We made it to our seats and were greeted to a completely packed house. The announced attendance was less than 100 shy of 79,000, making this the second-highest attended sporting event I had ever been at, behind Penn State’s 2002 trouncing of Nebraska. Throughout the stadium there were clear pockets of Chelsea blue and Barca red. Our particular section was a fairly even mix of the two.

Generally, the passion at soccer matches translates pretty well through television. You hear the chants and the songs and see the emotions on people’s faces, and you can sense the intensity. Even so, it is nothing like the experience of being in attendance, even at a preseason exhibition match. Everyone there was glued to the action. I didn’t see a single person near me texting or talking on the phone while the game was going on, which was refreshing. The closest thing I saw to a technological distraction was a Barcelona fan behind us who was following the team’s Twitter during the game.

The noise was nonstop, and during one particularly intense exchanging of chants I literally got goosebumps. I could feel the emotions of the fans around me ebb and flow along with the game. It was an incredible experience, and I can only imagine what it is like during a match of consequence.

Once the game began, the first thing I noticed was how being able to see the whole field altered the viewing experience. Instead of being limited to a small area around the ball, I could see what all 22 players on the field where doing. Watching runs originate and play out, seeing multiple runs happen simultaneously, and being able to see the full picture of how a team was working to unlock the defense was an eye-opening experience, especially for someone with an admittedly limited soccer knowledge. Watching formations hold up or break down was also an interesting aspect to witness in person.

The player I was most looking forward to seeing was Eden Hazard, and he did not disappoint. He opened the scoring in the 10th minute on a beautiful goal after an incredible run through four Barcelona defenders.

Hazard continued to show that he is one of the top players in the world and why his manager said he is better than Cristiano Ronaldo.

During and after Hazard’s goal, I was struck by the sheer skill on the field. This is not to say that I didn’t think soccer players were skilled — obviously they are. I think that much like hockey, TV just doesn’t do justice to the speed of the game or the skill that is really being exhibited. TV can give the impression that the game is kind of inching along, but being there gives you an appreciation for how much is going on and how much there is for the players to process, along with the split-second decisions and reactions that need to be made.

Chelsea took the 1-0 lead into the half, and we headed out to the concourse to grab some refreshments and check out the stadium a little bit more. We struck up a conversation with two Englishmen who had flown over for the game and got a little schooling on the European perspective. They gave us a lesson on some of their favorite chants, most with lyrics that aren’t appropriate to repeat here. They compared the atmosphere at FedEx Field with that of a Premiere League match, and while they were sure to note that they were impressed with what they saw here in the United States, it certainly didn’t compare to what they were used to at home. They attributed much of the difference to the fact that at FedEx the fans were intermingled as opposed to grouped together as they are in England. We discussed some of Chelsea’s history, as they have been following the club since 1972, and some of Chelsea’s most heated rivalries. We shared some stories of our hatred for the Dallas Cowboys before heading back to watch the second half, and our discussion with them was one of my favorite parts of the night. 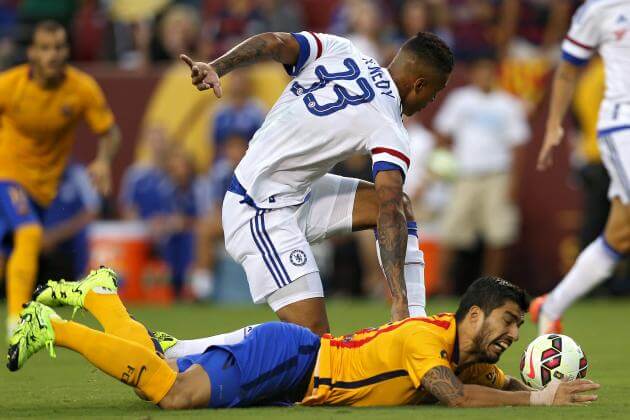 Luis Suarez equalized for Barcelona in the 52nd minute when his looping shot drifted over Chelsea keeper Thibaut Courtois and crossed the goal line before Kurt Zouma could clear. Minutes later, Barca took the lead on a beautiful strike by Sandro Ramirez, who fired from the left of the box into the far right of the net after a beautiful move to give himself a bit of space.

Gary Cahill pulled the Blues even in the 85th minute with a courageous header after a scramble in the box, earning a bloody nose for his efforts. Cahill’s goal ultimately sent the game to penalty kicks, where Chelsea prevailed 4-2 after Alen Halilovic hit the crossbar and Gerard Pique was denied by Courtois.

Courtois rightfully earned Man of the Match honors, making several sprawling saves in addition to his penalty save of Pique. His athleticism was on full display, and Chelsea’s net looked to be in good hands.

Overall, it was a thoroughly entertaining game, and my first experience with in-person soccer was extremely positive. I enjoy watching soccer on television, but the difference between watching on television and in person is vast. The ability to see the whole field and to see things develop in a way that just isn’t possible on TV made a huge difference. I’m interested to see what the experience will be like the next time I watch a soccer match on TV.

The experience was incredibly entertaining and fun, but it was also quite informative. It gave me a greater appreciation for the players and for the game itself. It helped me grow my knowledge and understanding of soccer. And it certainly altered the way I will watch soccer going forward.

The opportunity to see the English champions take on the Spanish and European champions is one that I am so glad I didn’t pass up. The fact that one of those teams was the team I root for and that it was the first soccer match I had ever attended made the experience that much more memorable and enjoyable. If you’ve never seen a soccer match in person, I highly recommend it. I know I am already looking forward to my next chance to do so.

How Chelsea Vs. Barcelona Altered The Way I Watch Soccer 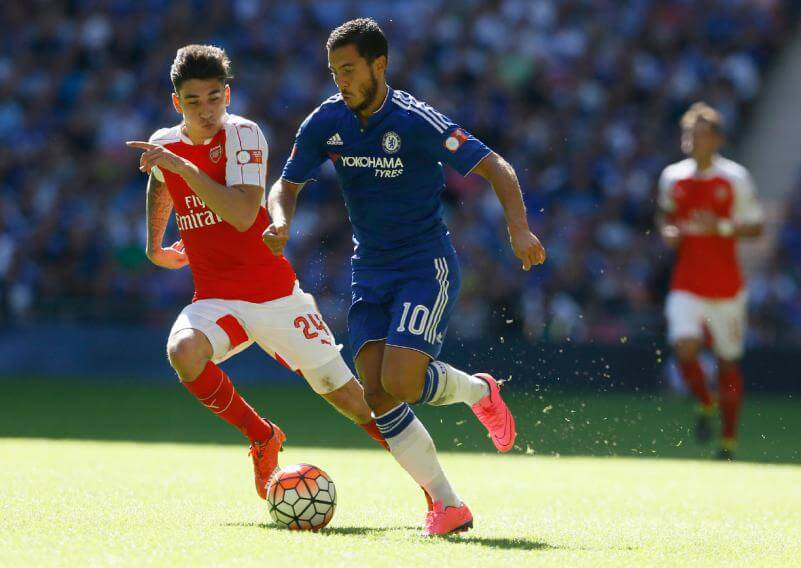