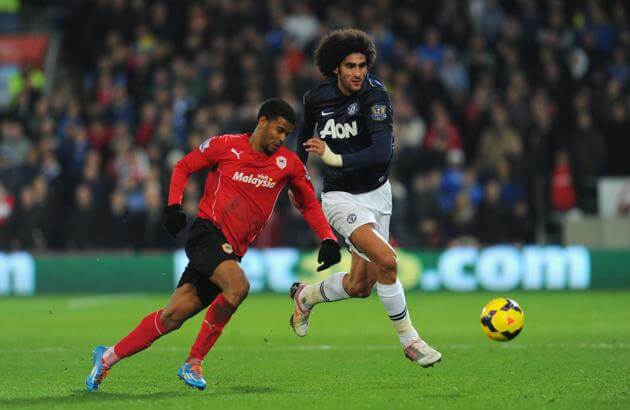 The city of Manchester has dominated the Barclays Premier League the last two seasons. Manchester City won its first title in 2012 at the expense of cross-town rivals, and long time tormenters, Manchester United. Last year, the Red Devils returned the favor and then some, virtually securing the league long before winter was over.

The 2013-14 has been a season of change for both clubs. City's title winning manager Roberto Mancini was axed to make room for Chilean attacking mastermind Manuel Pellegrini. United, on the other hand, lost the legendary Sir Alex Ferguson, who had led the Red Devils to 13 Premiership titles.

David Moyes took over at United and promptly sparked a Mike D'Antoni/Phil Jackson like debate among Red Devils fans. United have struggled to match their standard in the early going, drawing at home with Southampton and losing away to City and Liverpool, their two biggest rival.

Moyes temporarily restored faith with a home victory over leaders Arsenal two weeks ago. But on Sunday, United dropped points at newly promoted Cardiff City. Granted, it's not easy traveling to Cardiff where the Bluebirds dispatched City 3-2 and held Everton 0-0. Still, United expected to come away with three points even without Robin Van Persie who didn't even travel with the club due to injury.

And to concede in the 90th minute, when Kim Bo-Kyung headed home Cardiff's equalizer, well that's insult to injury. Kim's goal came in “Fergie Time,” the dying moments of a game when United always seemed to snatch a result.

Now the Red Devils sit in sixth place and it's not exactly early. What can we say about United as November draws to a close? It's simple. The Premier League got better and they didn't. While Arsenal, Chelsea, City, and Spurs added the likes of Mesut Ozil, Samuel Eto'o, Jesus Navas, and Christian Eriksen, United's big signing was Moyes' former Everton man Marouane Fellaini. Since his arrival in August, Fellaini has yet to find a role in his boss's new team. As a result, the midfield relies heavily on the inconsistent Tom Cleverley, who has yet to register a goal or assist in league play, and Wayne Rooney who seems intent on running himself into the ground. If Robin Van Persie misses any length of time United may find themselves not only out of the title race but the top four as well.

Which brings us to City. As their rivals were kicking off in Wales, the Citizens were putting the finishing touches on a 6-0 trouncing of Tottenham Hotspur. Not surprisingly, the game was played at The Etihad Stadium. In six home matches, City is 6-0 and have outscored their opponents 26-2.

The road is a different story. City has won just one of their six away matches and have lost four times. They play like champions at home and a team bound for relegation on the road.

The difference between United and City, though, is that the latter's ceiling is much higher at this point. The Citizens' road form is an aberration for such a talented team. While they likely won't complete the season unbeaten and undrawn at home, they have been utterly dominant in Manchester for several years now.

With the exception of a December 7 trip to Southampton, the next few weeks pose little challenge to City. It's the match on December 14 that could launch City's title campaign. They host Arsenal on that Saturday.

One Reply to “Barclays Premier League: What To Make Of Manchester's Teams”