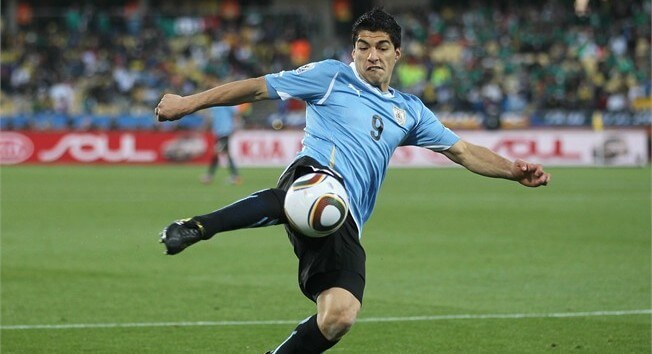 (Ed's Note: Starting from today until the end of the World Cup, we will have our soccer aficionado Dillon Friday available to the public to answer your questions about the 2014 FIFA World Cup. If you think your question is stupid, that's okay, ask it anyway. It might be stupid, but Dillon will probably answer it. Feel free to send Dillon your questions via email here. To kick things off, I have decided to ask Dillon a question of vital importance, because if there's one thing that fuels a sports fan, it's hate.)

"I hate Luis Suarez with a real passion, but for me to truly enjoy the World Cup I need at least two to three more people to hate. Can you give us some players to hate during this World Cup?" —Ed M.

Ah, yes. Hate drives fandom in sports just as much as, if not more than, love. We're resentful, spiteful creatures who detest above all else rewarded villainy. If you need a refresher on why Suarez is the unquestioned king of the World Cup villains, here it is. Four years ago, Ghana and Suarez's Uruguay were engaged in an epic quarterfinal that looked destined for penalties. But with mere seconds remaining in extra time, the Ghanaians earned a free kick that sent the Uruguayans scrambling. Suarez cleared one shot off the line with his shins. The next he stopped with his hands. The referee correctly sent Suarez off and awarded Ghana a penalty. Alas, Asamoah Gyan hit the crossbar from the spot, and in a bit of cruel irony, Uruguay won the game in penalties. Without Suarez's handball, Ghana would have become the first African nation to ever reach the World Cup semifinals. The entire world was behind the Black Stars. Suarez sullied the moment.

To think I haven't even mentioned his diving, biting, cavalier racism or incessant whining. Hate Suarez all you want, but you love to watch him play. Let's not forget how good he really is. And that's the point. I could give you a list of scrubs off the bench whose sole purpose in matches is to go cleats up into the first player who touches the ball. There are well-known players who are masters of gamesmanship that rightfully draw the ire of the neutral fan. Portugal's Pepe fits that description. But he doesn't inspire the “can't look away” villainy of a Suarez. In other words, you won't watch Portugal to root against Pepe.

With this in mind, let's give Ed some players to hate.

Was there any doubt? He's narcissistic to the point of hilarity. A recent example: During last Saturday's Champions League final, Ronaldo was all but invisible for two hours. In the 119th minute with his Real Madrid side up 3-1 on a well-beaten Atletico Madrid, the star winger was fouled in the box. Ronaldo converted from the spot, ran to the corner flag and ripped his shirt off, revealing his infinity-pack abs. Again, it was 4-1. Lionel Messi would never do that. And that's the kicker. Ronaldo is not Messi, his rival on the field and off it in the best player in the world debate. There is much to love about Messi, from his willingness to stay on his feet when taking on defenders to his cherubic face. Ronaldo, on the other hand, dives, whines and shows up teammates all while sporting meticulously gelled hair and carrying a supermodel on his arm.

I am a Robben apologist. I'm left-footed, and while I have more hair than the Holland star, I see him as my soccer spirit animal. But he's not very likable. Like Ronaldo and Suarez, Robben has a bit of a diving reputation. Here's where that gets tricky. Robben is so mesmerizing with the ball that he gets fouled nearly every time he has it at his feet. Referees can't and shouldn't whistle every nick, kick and stab that barely inhibits Robben's ability to attack. So the Dutchman dives, and he complains to officials. When his manager subs him off, Robben takes a slow lap around the pitch with his jersey in hand. He uses his right foot so infrequently that it's developed an inferiority complex. Does that mean we shouldn't like him?

Here's the thing about Spain. The national team is very hard to hate despite its unparalleled run of success. Iniesta, Xavi, David Silva, Cesc Fabregas and company play some of the most pleasing soccer the world has ever seen. Busquets, however, undermines the good feelings that Spain inspires. At a comparatively towering 6'2”, the defensive midfielder serves as the bodyguard for his diminutive teammates. He breaks up tackles and slides into challenges often in an illicit manner. Moreover, Busquets lacks the offensive skill that is innate to Spanish football. He doesn't belong on the same field, and yet he's both there and effective. Spain needs Busquets to be successful. I hate it, and you should too