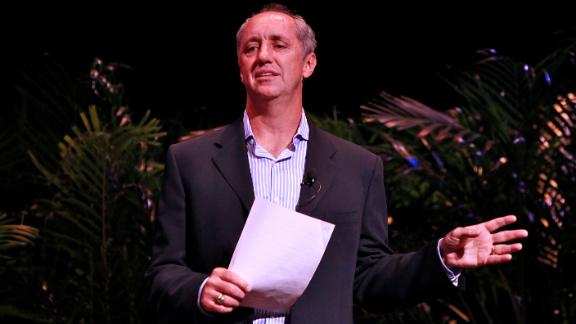 We've all seen those political shows that profess to condemn negative ads. Then they show the negative ads and have a 20-minute panel discussion on how terrible they are. Of course, what they're really doing is giving the negative ads free airtime while using them to get good ratings.

His suggestions are so preposterous that they border on insulting the intelligence of his readers. He urges the NCAA to force the Notre Dame football program to join a conference. Mr. Reilly knows good and darn well that the NCAA has no authority to force anyone to join a conference. The recent conference musical chairs that we just witnessed is proof of that. He then called on NBC to cancel its contract to nationally televise all Notre Dame home games. Mr. Reilly is fully aware that NBC has every right to televise whatever it thinks will be profitable for the network, within the guidelines of the Federal Communications Commission. Regardless of ranking, if Notre Dame is attracting eyeballs all over the country, particularly in the upper income 18-49 demographic, the Irish are going to be on TV.

He calls for publications to stop ranking Notre Dame so high on their recruiting lists and preseason rankings. These publications are intentionally misleading the public. They know that Notre Dame did not have a top 5 recruiting class or should not be ranked in the top 20. But the truth is, when you put a Notre Dame player on a magazine cover and proclaim that the program is back on top, it sells. It's not the most altruistic form of journalism, but the print media is struggling to stay in the black. The irony is that Mr. Reilly is simultaneously engaging in the same behavior that he is criticizing. Mr. Reilly knows that when he writes about Notre Dame, his magazine will sell, he'll be invited to do the talk show circuit and he'll be a hot topic of conversation for a few days. It's not a coincidence that his article was published in a slow sports week after the Olympics, the PGA Championship and before the U.S. Open Tennis matches start.