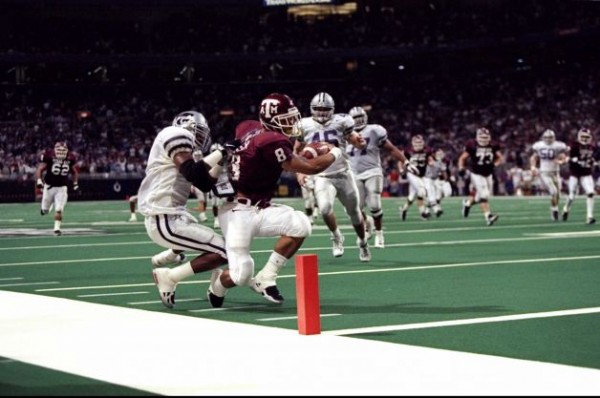 You probably can't recall off the top of your head what happened December 5, 1998.

The biggest game in the school's football history was a loss. The Wildcats fell in the double overtime to Texas A&M, 36-33.

Parker split through the defense and ran towards the end zone. A Kansas State defender grabbed him and held on. Parker dove and hit the pylon.

Texas A&M won its only Big 12 championship on Parker's play in St. Louis. Kansas State fell from its only national championship chance on the same play.

The 11-0 Wildcats knew second-ranked UCLA fell at home to Miami earlier that day. All Bill Snyder's team had to do was win.

A win and they'd get their chance at a crystal trophy. Ranked third in the BCS before the game, the path was clear. It was within their reach, a third-and-long, a broken tackle and a toppled pylon broke their hearts.

A&M pulled the upset, then lost to Ohio State in the Sugar Bowl. Kansas State fell to the Alamo Bowl, where Drew Brees and Purdue beat them.

At that point, it didn't matter. Any bowl aside from the national title game seemed a disappointment for the Wildcats.

It still is today.

The Aggies left the Big 12 to uproar from the traditional members. Schools stuck their nose up in disgust at Texas A&M and Missouri for the jettison to the SEC. **It must be noted that a few of the Big 12 schools left likely would have left as well, if not for anything other than general disdain for the Texas Longhorns.**

No one held firm in a belief that A&M could hang tight in the SEC. An unknown quantity in Coach Kevin Sumlin wasn't worth bet placement.

The wide-open offense that had worked so well for so many across the land seemed too flamboyant and stylish for the SEC.

Last Saturday in a place dubbed T-Town, a kid named Johnny Football showed the pundits A&M could hang - and then some.

Johnny Football Manziel led the 29-24 upset of the defending champs. The Tide rolled in and Manziel rolled out.

Not only did the boys from College Station thwart Alabama's title hopes for the time being, they opened up a path for Kansas State to the BCS title game.

The Wildcats and Oregon sit atop college football. If the two win out, they'll likely play for the crystal football in January.

Notre Dame will remain behind them. Alabama or Georgia likely will too. It's an open road for the Ducks and Collin Klein to meet in the biggest game of the year.

File it under the tab, "The enemy of my enemy is my friend." Snyder has since retired and come back to coach. He's got his team in the spot he had it in 1998, except this time there is no Big 12 title game to overcome. The game's expiration is due in part to A&M's departure.

If A&M had remained with the group that pined against their sayonara, perhaps Alabama would be undefeated today. Maybe Johnny Football would put Klein's hopes to rest in a shootout.

What-ifs and yeah-buts are commonplace in today's college football debates. They exist in every barbershop and Twitter duel.

It seems like the only thing anyone can agree on is that Notre Dame makes them mad. As much as things change, some will always remain the same.

When there are changes, they can end up flush for a team that had its hopes dashed so long ago. 1998 feels like a day of black-and-white screens to today's society.

It wasn't so long ago that A&M did to Kansas State what it just did to Alabama.

Somehow, the cyclical nature of the sports gods have made the Wildcats laugh. Now, the football gods have given their begotten son, Johnny, to the purple cause.

The Wildcats can forgive A&M for 1998. Somehow, and in some way, it brought them to this point.

It's funny how things change. From a defeated pylon to an offsides call in Tuscaloosa, things have gotten a bit more chummy between Kansas State and the Aggies.