This is how it starts. I go on Tumblr, check out Oakley and Allen, it leads me to For All To Envy where I start browsing the hip-hop section and see this Mase t-shirt for $100. I think about it for a second, actually more than that, enough time to actually debate whether it's worth shelling out that much money plus shipping to Canada even though there are mortgage payments, and things, and things, and wedding costs, and things and things.

And then I open another tab in Google Chrome and take myself to eBay. Last year, I went on a two-month binge with Champion brand NBA jerseys there, somehow convincing myself that paying around $40 for each of those jerseys 10 times over was some sort of bargain, a Moneyball approach to exploiting a market inefficiency as opposed to spending two hundred bucks for some Mitchell & Ness throwbacks.

Because of that, there's a Todd Day Milwaukee Bucks jersey that hasn't come off the hanger. Actually, that's a lie; I wear it to the gym when I go at midnight and I know I'll be the only one there. A niche jersey with a niche target audience.

Anyhow, I spent three hours the other night browsing eBay, and thanks to adding a bunch of things to the watch list, below is the process I took from finding a Mase t-shirt to going in a completely different direction, and then a few others, before I ended up with, an R. Kelly concert tee.

Here we go. If you are interested in any of the items below, clicking on the photos will take you to the corresponding eBay page. Most of them have a buy it now option.

First a slight detour into 1990s NBA jerseys because I have a saved search for Champion Brand jerseys in size 44.

Everyone needs a Sam Cassell jersey in the collection.

If you need a Cassell, you have options, be it Houston, Phoenix, Dallas, Milwaukee, Minnesota, the Los Angeles Clippers and well, we'll ignore the last few teams he was on. In fact, every player in the monster trade that brought Cassell to the Nets in 1997 has a jersey that you can probably walk around with at a concert: Chris Gatling, Jim Jackson, George McCloud, Eric Montross, Ed O'Bannon, Robert Pack and Khalid Reeves. Somewhere, I'm sure there's a collector out there with every Chris Gatling jersey. It's like believing in someone who has every single Criterion Collection movie in numerical order on his or her shelf, and not much else because that's a lot of money. 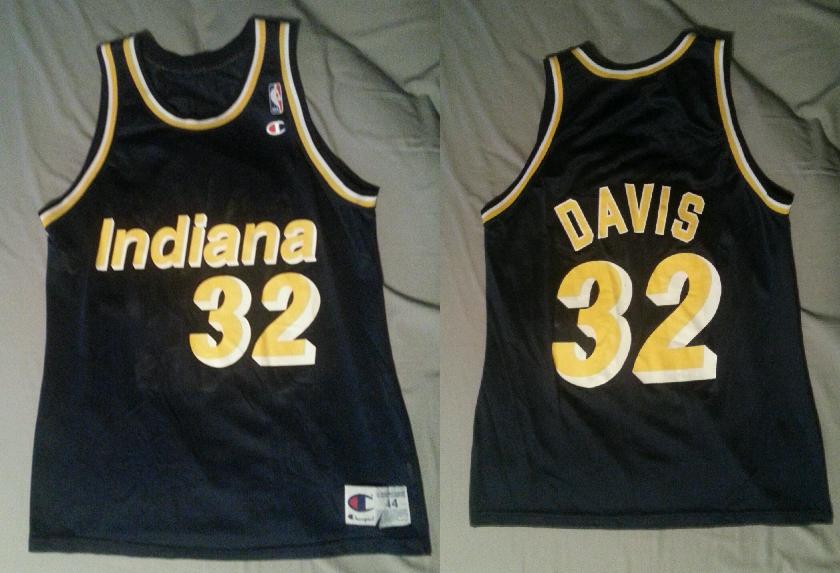 Or because Reggie Miller gets on too many people's nerves for his commentating that it's hard to rep his jersey, you can opt for one of the Davis Brothers tandem, preferably Dale Davis because Antonio once criticized the Canadian educational system, which worked out alright for me. 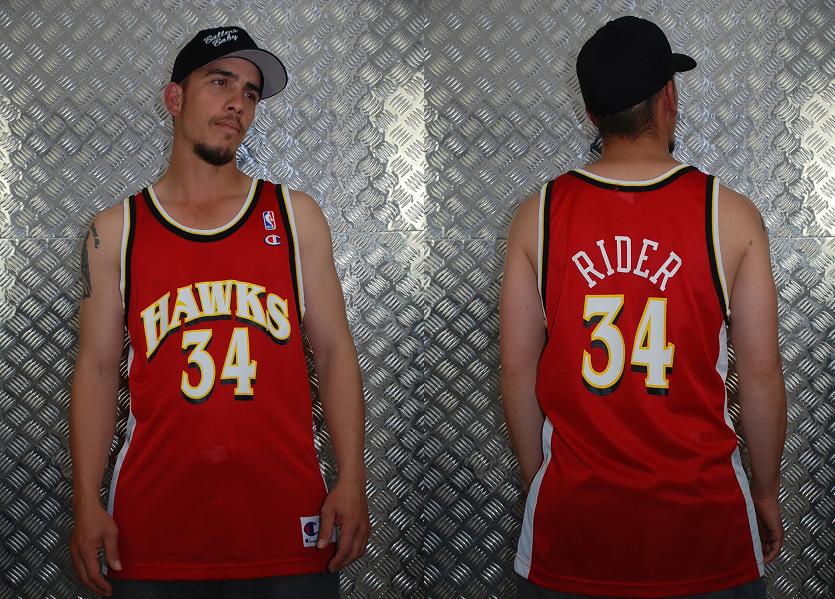 The only caveat here is the male model. Listen, nothing against making a few bucks for these pictures — or maybe he's the owner of this jersey — but if you want to earn my trust as a customer on eBay, I'm going to need you to just take a couple photos of the jersey while it's laid out on your bed or your hardwood floor. If you turn this into a Karmaloop photo shoot, I'm going to take my $10 international shipping payment somewhere else. Conclusion: Having a male model in your eBay picture severely compromises the authenticity of your jersey. #factsonly

Okay, I know, it's that Detroit Pistons design and it's Otis Thorpe, but let me explain.

Here's the case for owning this jersey: So before the 1997-98 season, the Pistons traded Thorpe to the Grizzlies for a future first rounder. The pick the Pistons got in the trade ended up being the second overall pick in the 2003 draft — which kind of sucks for Vancouver, who became Memphis except Detroit passed on guys like Carmelo Anthony, Chris Bosh and Dwyane Wade to take Darko. Anyhow, the Grizzlies got a shot at picking second in 2009 and took Hasheem Thabeet, so I don't know, the lesson here is, people make bad draft picks. And if you're ever brave enough to wear this jersey out, you can tell that story and maybe make a new friend. The possibilities with this jersey in your collection aren't really endless, but there are some. Okay, a few.

I don't think I need to explain this one. 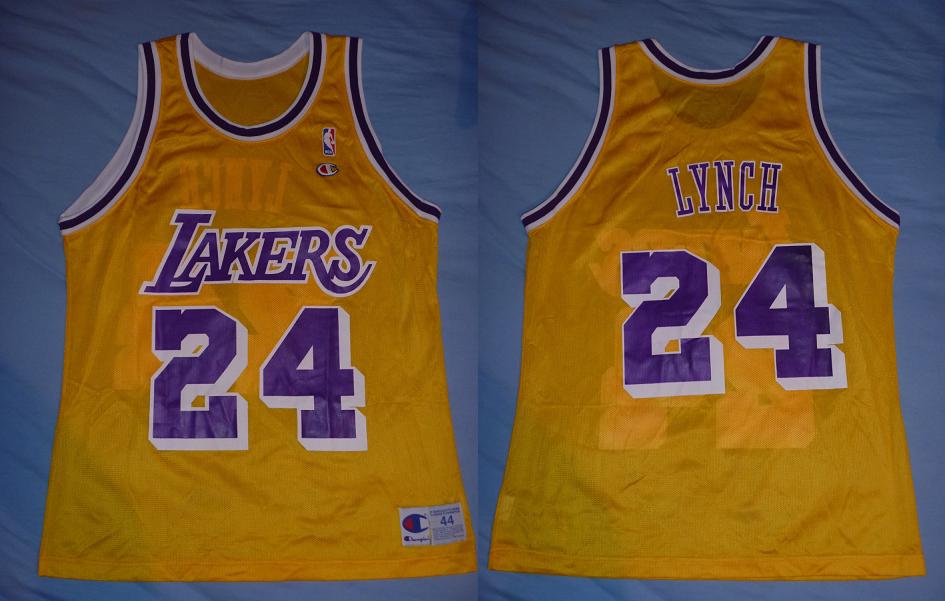 "Look at this guy, wearing a number 24 jersey like he's the biggest Kobe fan — OH WAIT, wow, it's a George Lynch. Respects."

You're buying this jersey for someone to have that exact thought in their head. Tread lightly.

Ok, now onto baseball, you know what would be cool, if you collected the bobbleheads of every player named in The Mitchell Report. 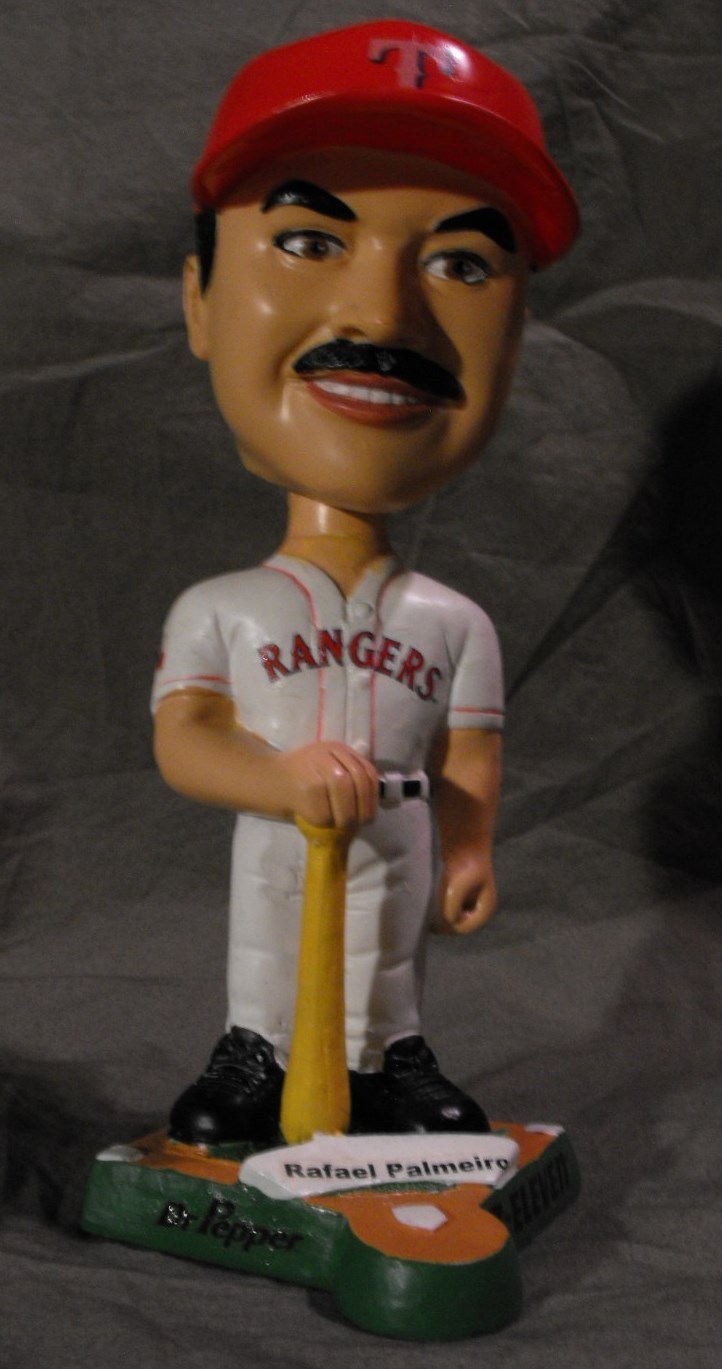 And if you do, you should totally start with this gem. The mustache, man. The mustache. For completeness sake, here's all the names listed on The Mitchell Report. Good luck finding a Ricky Bones bobblehead. Much success to you, even if you wish me the opposite; sooner or later we'll all see who the steroid user is.

Or, another idea: Rep the player before he was on HGH because some of them were legends before the drugs.

I don't know if this jersey is real. I feel like I have a good grasp on NBA jerseys. Baseball, not so much. Let's just say I've had a few bad experiences on eBay with them. But how nice is this jersey? This is Bonds, before all the BALCO mess and all that. You are representing a clean player, the innocent man who didn't know he would become guilty later on. 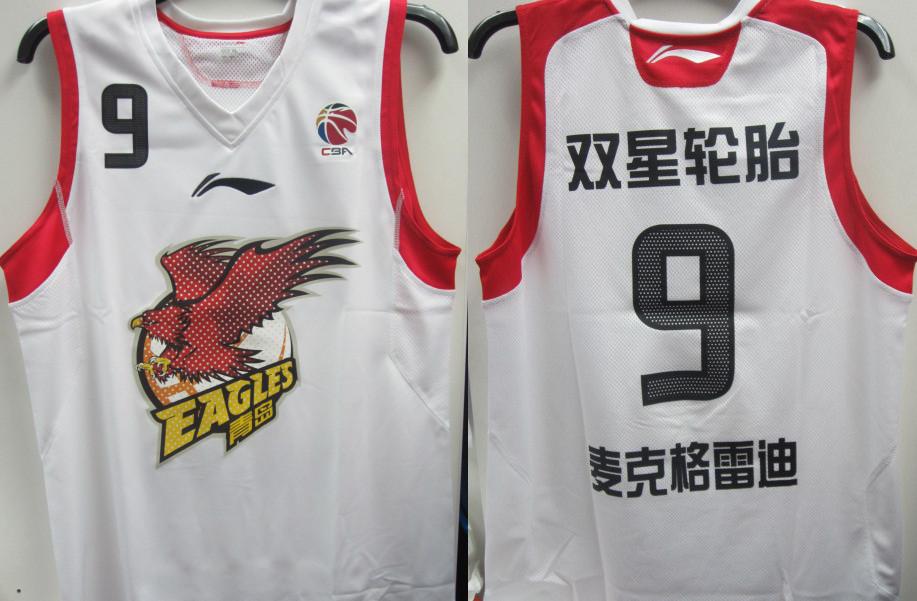 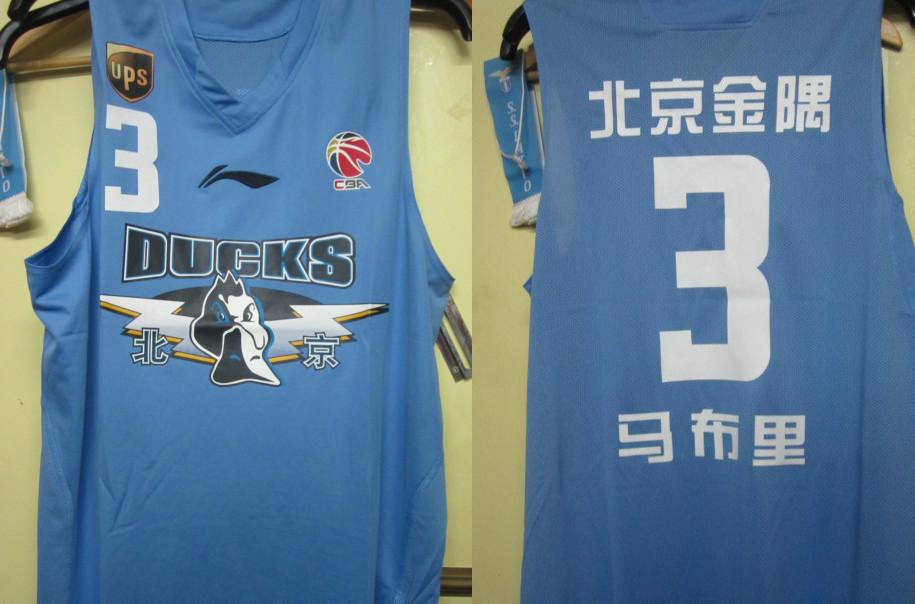 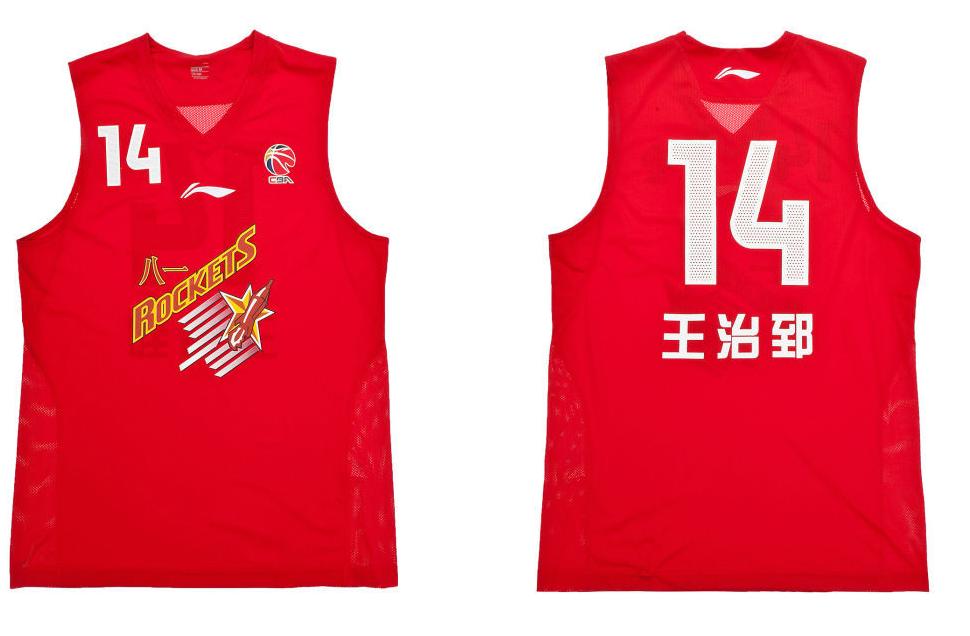 Do you know what else is cool? Chinese names on the back of jerseys. In order, these are Li Ning jerseys for Tracy McGrady, Stephon Marbury and Wang Zhi Zhi. If you don't know, it's actually really hard to find any Chinese Basketball Association jerseys. As with everything in life, it's hard to authenticate the validity of this. The jerseys being sold are from a dealer in Hong Kong. But you know what, even if they're not the actual thing, the actual thing doesn't exist for anyone to be able to compare it. And everyone will just be mesmerized by the fact that you have Chinese writing on the back of your jersey.

OK, now I'm finally back to browsing for my Mase t-shirt and this is what I come across... 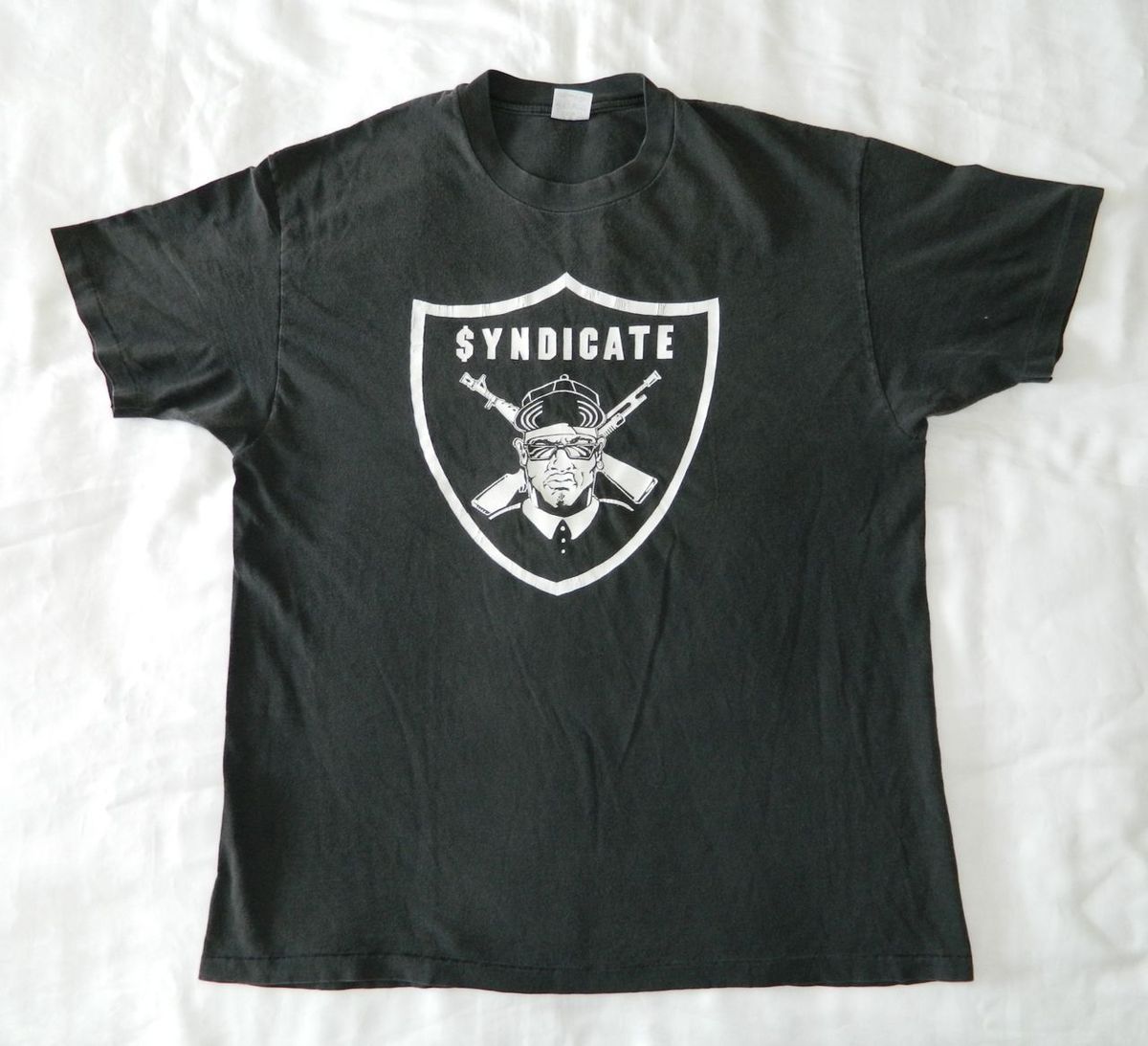 Excuse my lack of knowledge on this, but I found out this is a Rhyme Syndicate Records t-shirt, the record label that was founded by Ice-T. But seriously, I'm putting this on my watch list on eBay because I want to watch someone buy this. For double the price, you could buy this Givenchy shirt and look like LeBron. I think that's the better option since we're at a "the lesser of two evils" stand-off here.

Wait, I just opened another tab in Chrome because I have all these random eBay search ideas in my mind. And let me tell you, the NBA team on a hockey jersey style is very, very, very underrated. Ask yourself: sleeve jerseys or a Cavaliers hockey jersey? This is what you call no contest. 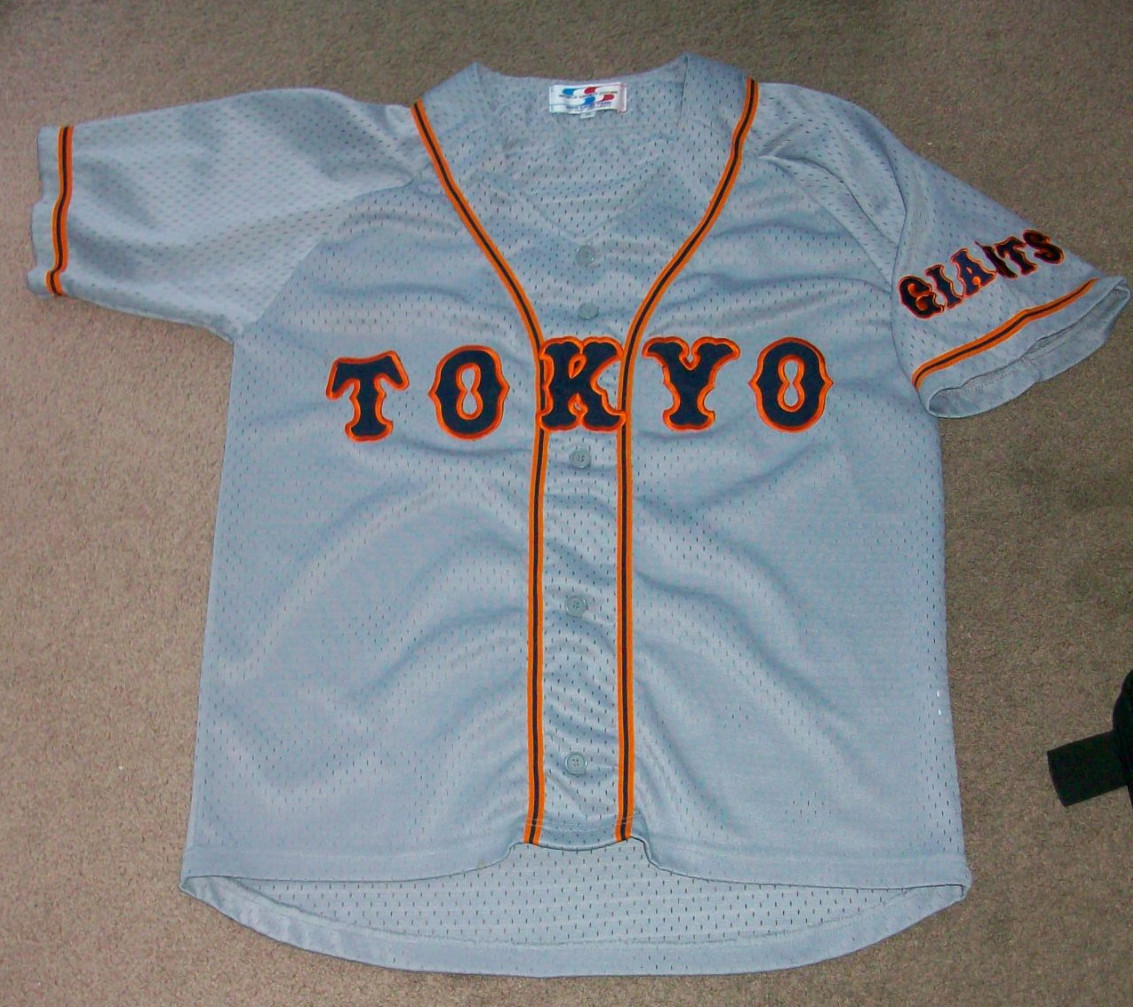 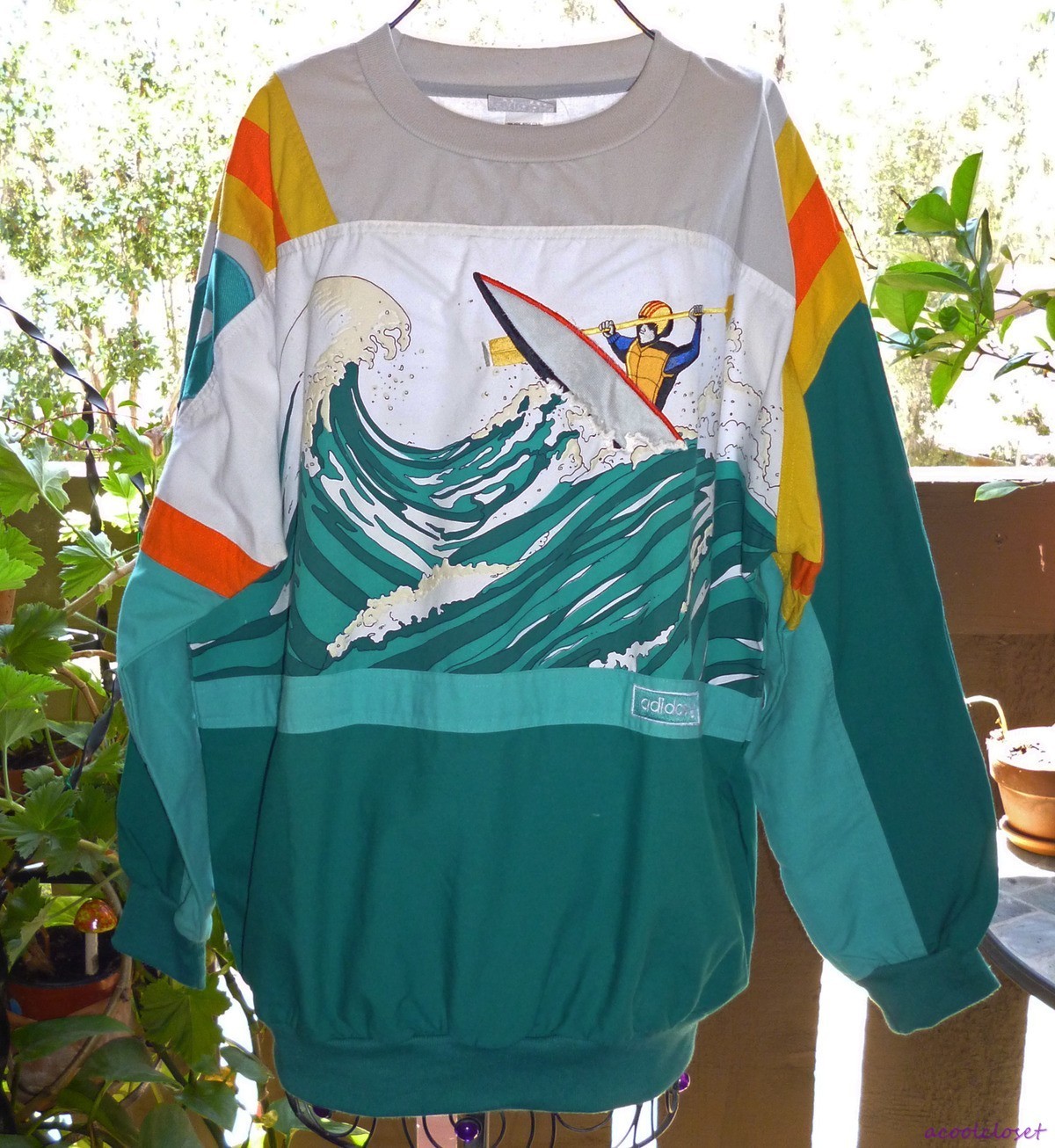 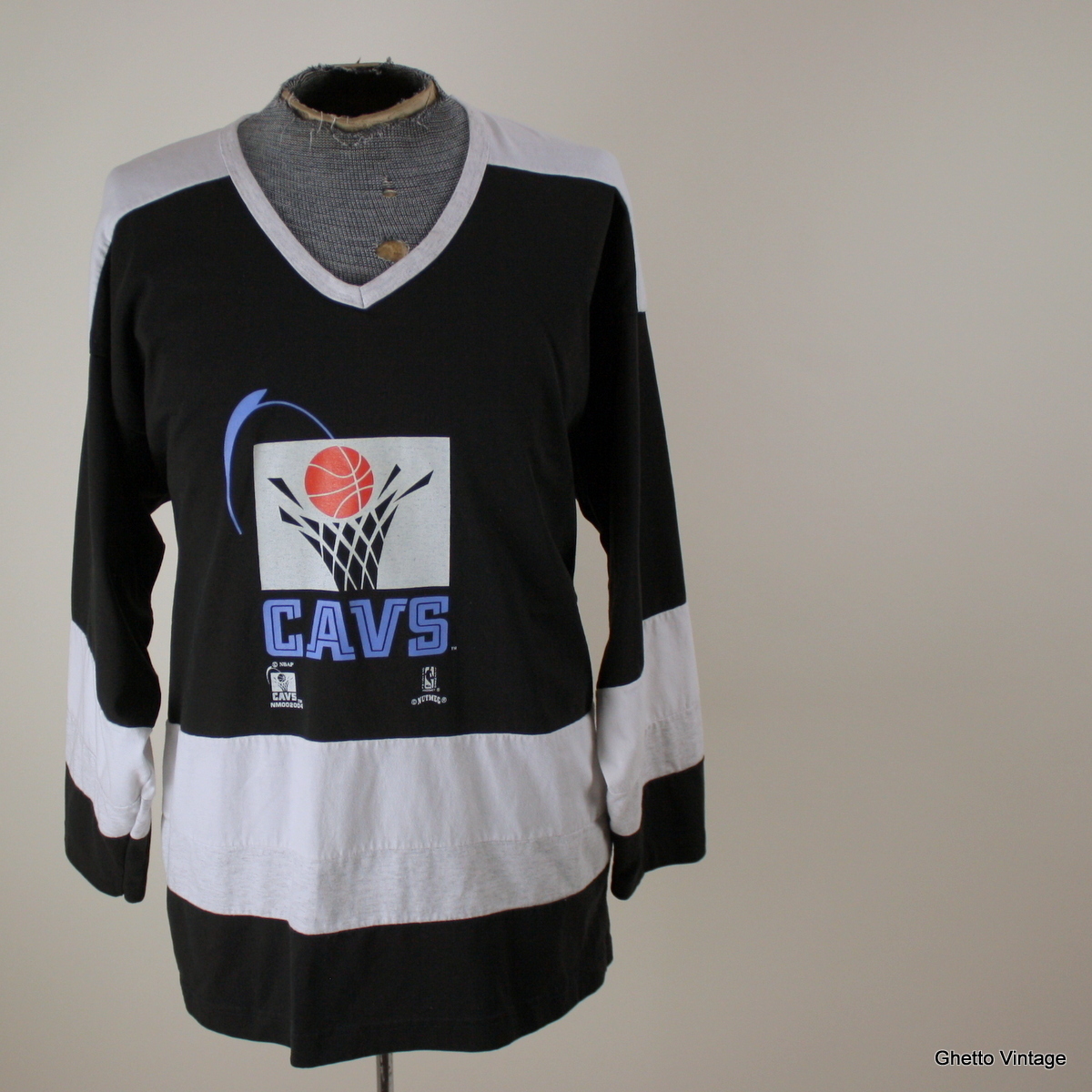 OKAY. HOLD ON. I FOUND THE HOLY GRAIL. 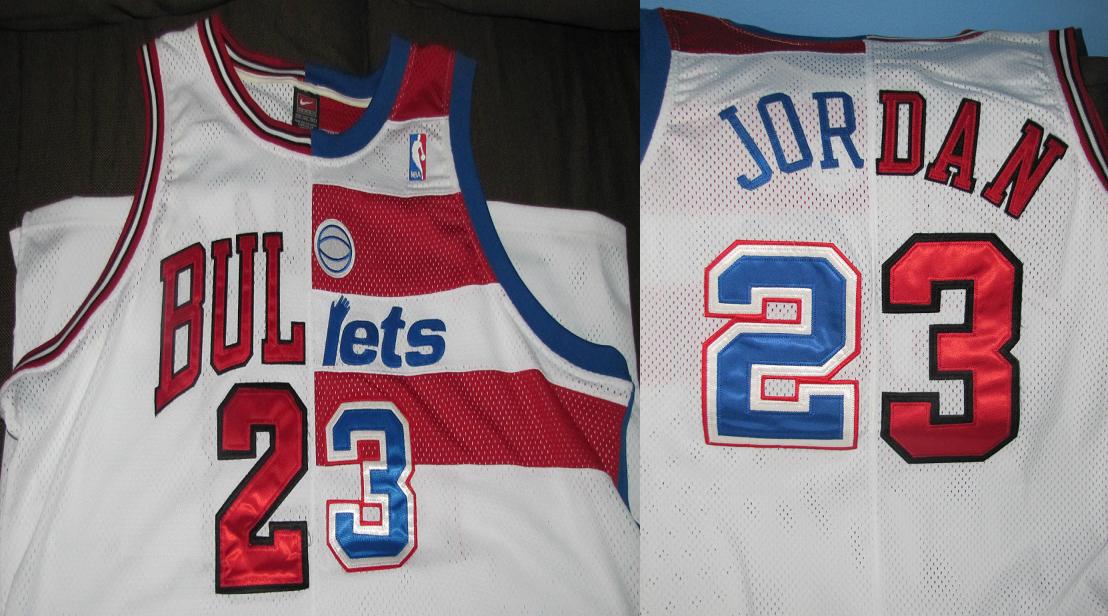 And after three hours of browsing, I ended up spending $15 on this shirt. Mission somewhat accomplished. 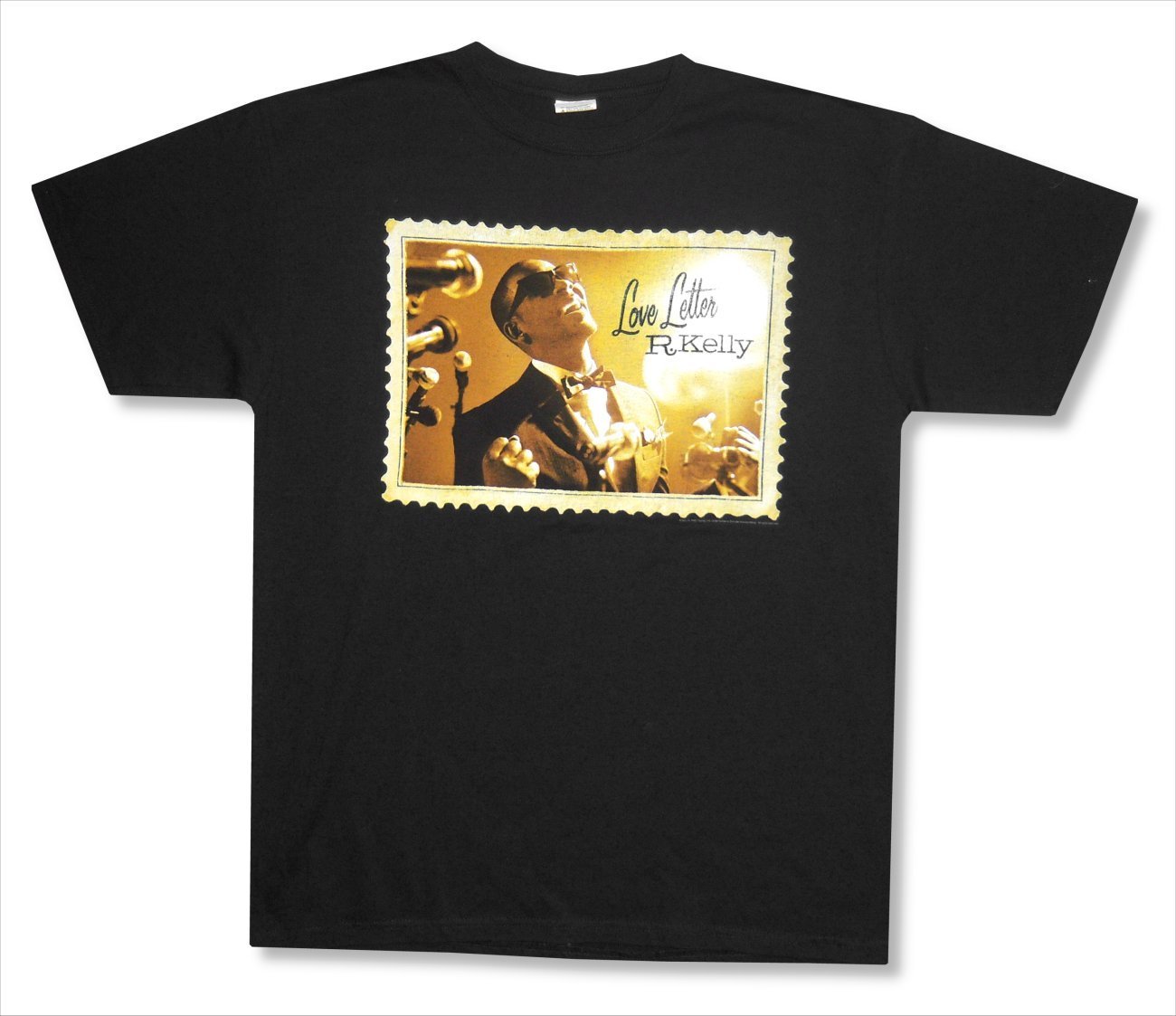 3 Replies to “My eBay Adventures: Mase, R. Kelly And A Whole Lot Of Sports In Between”