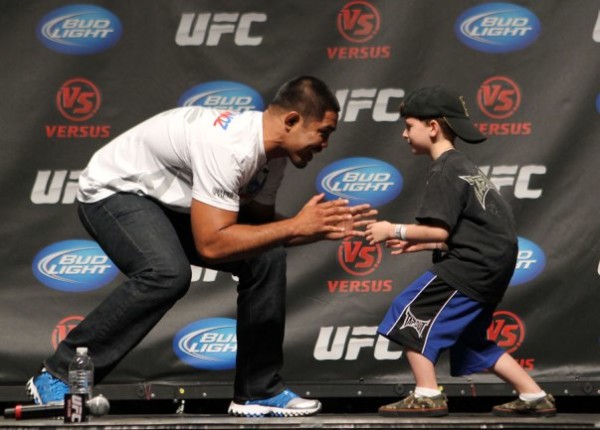 Mixed martial arts has come a long way since the Gracie family brought the Ultimate Fighting Championship to the United States in 1993. In the past 10 years alone the sport has undergone drastic changes, not just in the rules that make up the sport, but in the fighting styles that combatants bring into the cage. Today’s fighting styles can be broken down into three general categories: striking, wrestling and jiu-jitsu. Of these categories, wrestling is the great equalizer — it exists as a bridge between striking and jiu-jitsu, and as MMA has evolved over time, wrestling has offered its elite practitioners the easiest entry into MMA because it can neutralize the strengths of the other two categories.

It’s not that wrestling is a better or superior discipline in isolation than any other. Rather, in today’s current era of MMA, high-level wrestlers have excelled at a pace exceeding other single discipline practitioners because its components nullify the strengths of the other categories more effectively than the other way around. To understand how this happened we’ve got to look back at how MMA has evolved in the United States.

UFC 1 was a grand experiment. It was created largely for two purposes. First, to answer an age-old question about which style of martial arts was the best. If you matched up the best of each discipline, which art form would be victorious? Second, the tournament was the introduction of Gracie Brazilian Jiu-jitsu (BJJ) to the popular masses. UFC 1 did a much better job of accomplishing its second task than its first.

In 1993, the very concept of cage fighting was distasteful to many in the U.S. For that reason and many others (including lack of money and interest), UFC 1 didn’t include the best representatives of each discipline. The professional boxer that night, Art Jimmerson, was at best a journeyman and had a 25-9 record. He retired from boxing in 2002 with a record of 33-18, having lost his last nine fights. The other professional boxer at UFC 1 was Kevin Rosier, who was also a WKA kickboxing champion with a pro boxing record of 7-17.

Of course there were better fighters that night, but the general point remains the same.  The representatives were good but not elite.

UFC’s biggest fault, however, was the glaring omission of any wrestlers. Teila Tuli, the sumo wrestler, doesn’t count. Sumo does not share any of the characteristics that have made wrestling the trump card it has become in MMA. Ken Shamrock kind of counts. He wrestled in high school but never even placed in the state tournament, and he never wrestled in college or thereafter. Shamrock’s stints in professional wrestling circuits, like the WWF(E), are irrelevant.

The UFC could have tried to recruit real wrestlers like Kevin Jackson or Bruce Baumgartner — both 1992 Olympic Gold medalists — but that was very unlikely. Can you imagine what a fight between Royce Gracie and either of these men would have looked like? I can guarantee you they would not have been taken down by the subpar double-leg tackles Gracie used against other competitors — but more on jiu-jitsu takedowns later.

Even though the first UFC tournament didn’t gather the best of all disciplines, it did serve as a brilliant marketing platform for Brazilian jiu-jitsu.

Royce Gracie, a recently promoted black belt under Grandmaster Hélio Gracie, was 6’1’’ and weighed about 170 lbs. Through grit and the use of a mysterious skill set, he became the UFC’s first champion.

He was not the obvious first choice, however. That was Royce’s older brother, Rickson, who was heavier, generally a better physical specimen and more battle-tested. But when the Gracies decided to pick their representative, they specifically wanted to eliminate size as a part of the equation for evaluating Brazilian jiu-jitsu. If Rickson had won, people could have pointed to his size and strength as the reason for his victory. But with Royce, there was little to point to but his skills.

Royce was successful in part because of the refined technique the Grandmaster had bore into him since before he could walk. But he was also successful because at the time, Brazilian jiu-jitsu was so foreign that its novelty was beyond compression. In other words, it had the element of surprise.

Even if the striking disciplines (boxing, Muay Thai, etc.) didn’t have long histories, people would still intuitively know that when someone’s fist or foot is flying rapidly through the air, you don’t want your face to be the landing pad. The same can’t be said about the setups for an arm bar or a triangle choke.

The fighters at UFC 1 and for many years thereafter, when faced with Brazilian jiu-jitsu, had no concept of where the danger was coming from. They were blind men walking onto a minefield without even knowing it, unsure if their next move would be their last.

Fast-forward to the present. MMA is different than it was just 10 years ago and leagues away from how it existed in the first few UFC tournaments. Why?

First, the proliferation and popularization of Brazilian jiu-jitsu after UFC 1 changed the martial arts culture and ranks of professional fighting. As every professional fighter has added Brazilian jiu-jitsu to his or her arsenal, the effectiveness of BJJ has decreased. I’m not saying BJJ is ineffective. I’d be crazy to say that. But relatively speaking, BJJ isn’t as effective as it was at UFC 1 because now people better understand the danger BJJ poses.

In the world of blind men, the one-eyed man is king. But as BJJ technique spread, the mystery of the sport diminished and the setups for chokes and locks became more obvious. The blind became near-sighted and eventually learned to see quite well.

In the professional ranks what many recognized is that in order to compete they didn’t need to become Grandmasters themselves but had to develop, at the very least, a basic understanding of defensive jiu-jitsu. They had to learn how to avoid the most common submissions. That would allow them to stay in the fight long enough to use their stronger skill set.

Over time professional fighters have done just that. There are now plenty of fighters who’ve never submitted anyone and aren’t likely to do so, but have successfully avoided being submitted even against some well-known and respected BJJ practitioners.

Great BJJ guys on the whole aren’t great strikers and don’t employ ground and pound as much as wrestlers. So when you’re on the ground against them, the first concern is submission defense.

Take Tim Kennedy for example. He’s got eight submissions on his record. Leading up to his fight with Roger Gracie, he was considered a proficient jiu-jitsu player. And despite his black belt in the sport, there is no one who would put money down on him beating Gracie in a pure jiu-jitsu match. Roger Gracie is a seven-time BJJ World Champion, not to mention a champion in two weight classes at Abu Dhabi. He’s not only one of the best BJJ guys in MMA — he’s one of the best jiu-jitsu guys in the world. Yet, to the surprise of many, not only did Kennedy defend himself brilliantly on the ground, but he also managed to inflict some damage while he was down there.

Kennedy is a great example of what has been happening across the sport for the past 10 years. As fighters have focused on jiu-jitsu defense, it’s allowed some to excel to the point that they can defend against world champions.

So where does wrestling fit in to all this?

Wrestling, especially freestyle/folk style (the kind where you’re allowed to tackle the legs), has served as a sort of antidote to the poison pill of Brazilian jiu-jitsu.

Jiu-jitsu guys hate to hear this, but their takedowns are atrocious. Especially when it’s no-Gi, takedowns aren’t set up with much finesse and are often telegraphed a mile away. Even the great Royce Gracie was guilty of this at UFC 1. A strong wrestler should be able to avoid getting taken down. If he does, then it doesn’t matter if the jiu-jitsu fighter is Abu Dhabi champion because his greatest asset has been nullified.

Against strikers, wrestlers can do the extract opposite. Taking down a boxer or Muay Thai fighter (like Anderson Silva) neutralizes the striker’s most dangerous set of tools.

Take Ben Askren for example. Many have criticized him for his repeated use of wrestling to take guys down and slowly pound them into a decision victory. Askren’s ground and pound has been developing slowly so he hasn’t knocked many guys out, but you’d be hard-pressed to find any news reporter who’d say he wasn’t in full control of his opponents.

4 Replies to “Wrestling: The Great Equalizer To Every MMA Match”

Wrestling: The Great Equalizer To Every MMA Match