The UFC middleweight champion (for now) Chris Weidman might be the best known wrestler of the division, but he's nowhere near the best wrestler. That title goes, unreservedly, to Yoel "Soldier of God" Romero, and he went a long way in proving that by smashing Lyoto Machida on Saturday night with his first takedown in the fight.

Machida has long been known as an elusive, counter-puncher with power. Against wrestlers, he's historically had amazing success, especially in stuffing their takedown attempts. But as we've written about here before, the term "wrestler" often gets used in the same way to describe to any college wrestler as it does a NCAA champ or even an Olympic medalist. In doing so, people fail to realize the giant chasm in wrestling skill between fighters like Chris Weidman, and the elite wrestlers of the sport like Yoel Romero.

Weidman is a two-time NCAA Division 1 All-American – a major accomplishment. Romero, on the other hand, is an Olympic Silver medalist, a World Champion, and holds victories over five Olympic medalists, including multiple victories over Cael Sanderson – one of the greatest wrestlers in U.S. history.

Weidman had a very difficult time taking down Machida in their fight. Weidman controlled the first half of their scrap on the feet, but in the championship rounds took the most punishment to date in his bright young career. Romero went for one takedown against Machida, and ended the night shortly thereafter.

From the clinch, Romero locked up a beautiful inside trip and transitioned into half guard as he took Machida to the ground. Romero wasted no time in reigning down several vicious elbows that forced the referee to step in to save a defensless Machida. 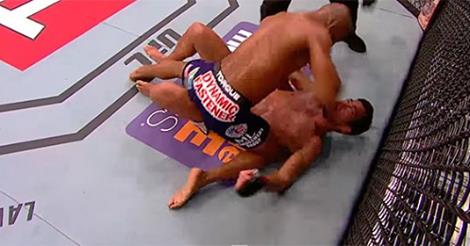 Only half a round earlier, as Machida sat in wait of the third round, he looked every one of his 37 years – maybe more. That is a testament of Romero's prowess on his feet. So in addition to his undeniable wrestling skills, his striking game was enough to wear Machida down over two rounds. His combination of speed and power on his feet held one of the most celebrated strikers at bay, so they'll be problematic for anyone in the division.

At 38, Romero doesn't have much time to capitalize on his skills. Once in their late thirties, fighters can turn "old" overnight. So he knows that he needs exciting upset victories like the one against Machida in order to climb the rankings quickly, and hopefully, get closer to the big money paychecks amazing Cuban athletes have long been denied.

If there's any justice in the UFC's matchmaking, Romero should only be one, or at most, two, fights away from a title shot. By the time he gets his opportunity at UFC gold, the belt might have changed hands once or twice by that time. Regardless of who's wearing the strap, Romero's unique combination of attributes are bound to be problematic for anyone. And the longer they make him wait, the more time he was to develop his skill. Remember, despite his advanced age, he's a relative youngin' in the MMA game, so he will continue to revolve, refine and improve. A truly frightening reality for everyone in the division.