Mexico City is no stranger to wars. Long before there was a “Mexico,” the city was known as Tenochtitlan, the capital of one of the most prolific indigenous empires to ever emerge in the Western Hemisphere. The Spanish, led by Hernan Cortes, managed to overtake the city and its proud fighting people only after months of hard fighting, mixed with political gamesmanship, treachery and a smallpox plague. Cortes succeeded while Cain Velasquez failed in his war at UFC 188, because unlike Velasquez, Cortes took the time to really understand his battleground, to adapt to it particularities, to respect it.

In sports, much is often made of the unique advantages and disadvantages of competing in a place like “The Mile High City,” Denver, Colorado. Baseball fans know that the thinner atmosphere at Coors Field makes it easier to hit home runs. Boxers like Oscar De La Hoya, Sugar Shane Mosley and now Gennady Golovkin make their fight camps near Big Bear Lake because the altitude does wonders for increasing stamina, forcing the body to do more with the precious little oxygen available from the thin mountain air.

Fabricio Werdum must have gotten the message and done a little homework, because he arrived in Mexico City over 30 days before his title unification bout with Velasquez. Maybe he didn’t do the comparisons against two of most recognizable high-in-the air cities in the United States, but someone likely told him that Tenochtitlan/Mexico City is really damn high. In fact, it’s about 2,000 feet higher than Denver and almost 1,000 feet higher than Big Bear Lake.

How much higher is Mexico City than San Jose, California, where Velasquez trains? Over 7,000 feet!

Velasquez was barely in town for two weeks before UFC 188. That would be significant for any fighter, but for a heavyweight lugging around 240-plus pounds and a fighter whose defining characteristic is his high output, constant pressure approach, the failure to prepare for the impact that the altitude change would have was a major oversight.

The mistake was apparent early. Even before Werdum landed his biggest blows, Velasquez seemed sluggish. After only half a round of hard pressure, Velasquez’s power, defense and posture all seemed to begin to slump.

Combined with Werdum's vast improvements in the striking department, Velasquez’s sluggishness resulted in a brutal first round where both men threw and landed big blows. And as time went on, Werdum managed to sneak in what is quickly becoming his marquee offensives weapon, the knee strike. 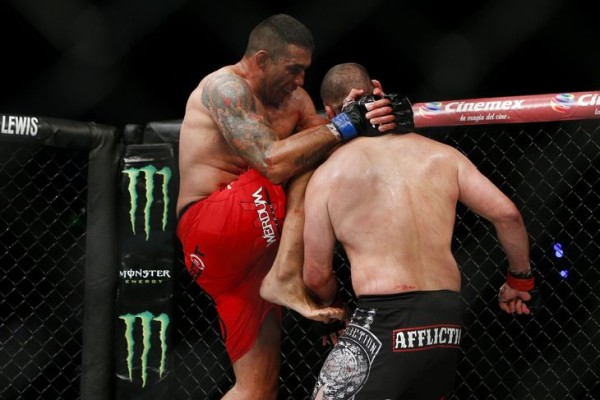 He landed it so many times over the course of the fight that Velasquez should be checked for a modified jaw structure. Maybe the whole adamantium skeleton inside Wolverine is real, but it's just inside Cain Velasquez. I’m convinced that Werdum’s knee strikes would have broken a normal man’s jaw two times over.

But Velasquez pushed forward. Lumbering, dragging his feat and winging his punches, Velasquez showed with every move from the third round forward that his lungs were on fire, starved for oxygen in the battleground of his ancestors.

In his fugue-like state, with muscle filled with lactic acid, Werdum started to pick Velasquez apart, which prompted Velasquez’s corner to call for a takedown. If Velasquez’s first big mistake was failing to train for the altitude, his second was to shoot a lazy, tired double leg on a multiple-time jiu-jitsu world champion. Werdum had Velasquez’s neck cinched up before he hit the ground. The tap was inevitable.

This fight would have looked drastically different in Las Vegas or San Jose — or anywhere that didn’t present the unique obstacle of high altitude. Would the conclusion have been any different? Who knows? But if there were a rematch, you can bet that the odds makers won’t have Werdum as such an underdog. His striking skills can no longer be denied their rightful accolades.

There’s a new king on the throne, but he rules over the most volatile division in mixed martial arts. To keep his newly won position, he’ll have to be twice as hungry as he was to win it in the first place.