“Jon Jones, get your shit together! I’m waiting for you.” - Daniel Cormier

Daniel Cormier was as emphatic in his post-fight comments as he was in his victory over Anthony “Rumble” Johnson at UFC 187. No fancy marketing teams or focus groups were needed. Cormier wrote the story line for what could be one of the biggest pay-per-view events in UFC history: Cormier vs Jones II - the rematch for legitimacy and redemption.

As far as I'm concerned, the true light heavy weight crown is now closer to legitimacy than ever before. Confused? Let me explain.

At UFC 165, Jon Jones and Alexander "The Mauler" Gustafsson, hammered each other for five of the most entertaining rounds in the division's history. Jones was tested, taken down, and trampled sufficiently to merit losing his title. In my book, the UFC gold, if in spirit only, transferred than night to The Mauler, while on the official record books, Jones took his decision win and found a way to avoid serious talks of a rematch.

The real champ, Gustafsson, went on to defend his phantom belt successfully against Jimi Manuwa, before facing off against the dreaded power of Anthony "Rumble" Johnson. Amidst an arena of die-hard Swedes cheering the name of their champion, Johnson unleashed his much vaunted power to brutal effect. With one brutal punch, Johnson felled Gustafsson, who was never allowed to get back up.

In the mean time, Cormier came up short against Jones in a fight that didn't really live up to the hype on either side. Cormier looked sluggish and was ineffective in every position. Jones, seemed satisfied with a clear victory and either didn't, or couldn't, find a way to finish in truly explosive fashion.

Given that Jones wouldn't grant a rematch to the man that had given him the best fight of his career, Gustafsson, there was no way that Cormier was going to get a rematch with his less than stellar performance. It seemed, that the biggest UFC grudge match in years would end on a fizzle.

Then fate intervened to bring together the spiritual title with the physical one. Johnson, who'd taken the spiritual belt from Gustafsson in devastating fashion, was given a shot at the belt around Jones' waist. It would have been the perfect opportunity to re-harmonize the sanctity of the UFC crown, but Jones' demons destroyed the plan.

Due to his alleged involvement in a hit and run incident that left a pregnant woman with a broken arm, Jones was stripped of his title and suspended indefinitely from the UFC. Cormier stepped up to the plate to fight Johnson with only a few weeks notice.

This Saturday we saw Johnson's 9-fight win streak snapped in two. His power was on display and proved dangerous, as Cormier was knocked to the ground in the middle of the first round. Had it not been for the first half of his career spent in the heavyweight division, taking blows from hard hitters like Antonio “Big Foot” Silva and Roy Nelson, Cormier may not have been able to regain his wherewithal. 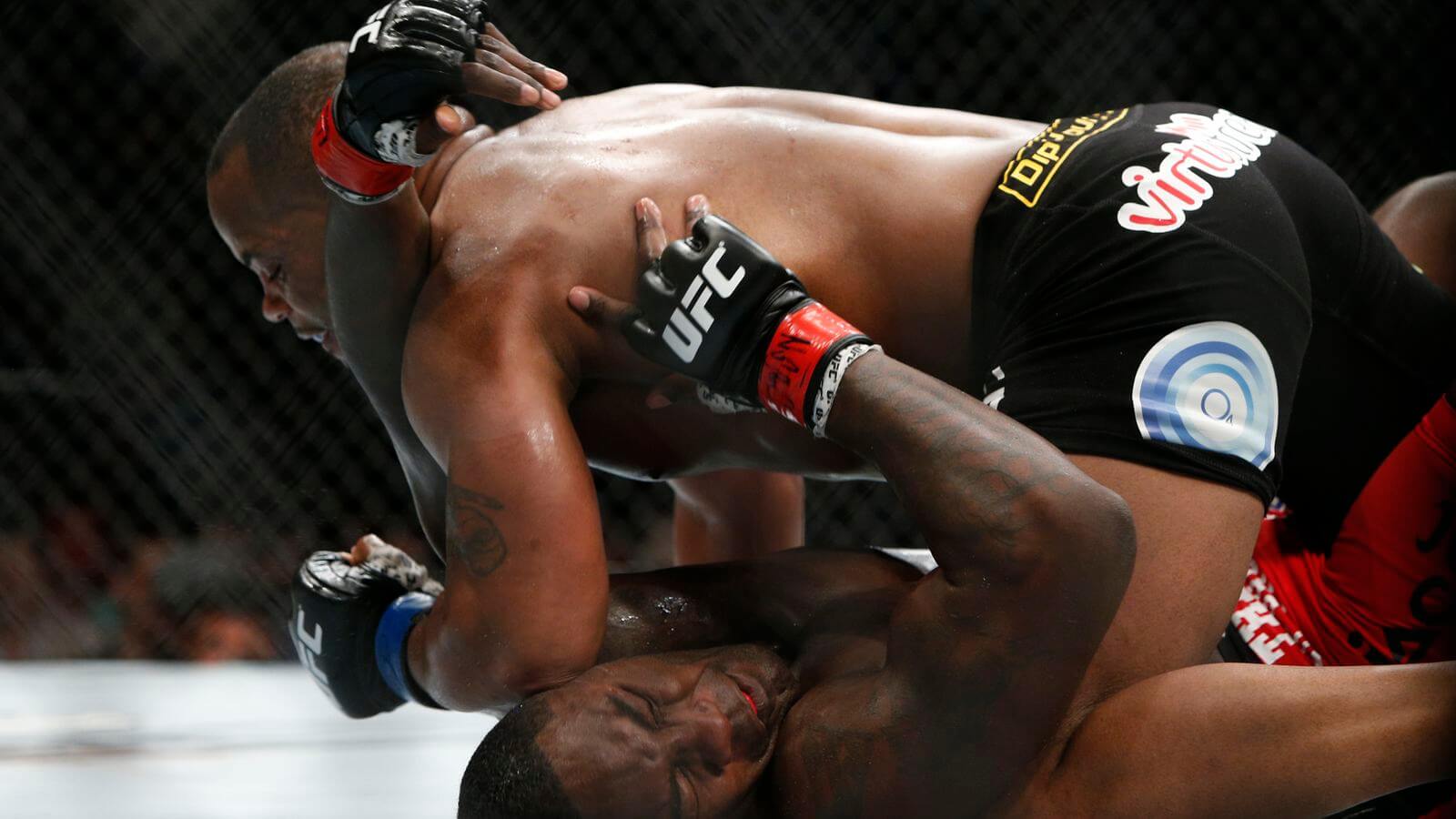 In round 2, Cormier controlled every position, and ultimately, worked his way into side control, where he cut up Johnson's face and began to break his will with hard elbows. By the time round 3 rolled around, Johnson's corner was screaming at him, “don’t give up.” An undeniably bad sign. By the middle of the round, Cormier had taken down Johnson again, and this time he latched up the rear naked choke he'd been hunting for.

Having stripped Jones of the title, and granting the winner of Saturday night's fight full championship honors, the spiritual title is once again reunited with the physical title. But Jones' name will linger until he's beaten, not just in the minds of discerning fans, but also on the official scorecards. Cormier knows that, and embraces that reality as much as he embraces the competitive spirit that his grudge match with Jones created. So instead of hiding his feelings about both, he clearly proclaimed what many fans wanted to hear - he wants to fight Jones again.

Given Jones' legal issues, Cormier is going to have to wait for that rematch to materialize. Other than for Jones, the lightweight division only has one man that would rightfully be considered near even betting odds against Cormier, would be Gustafsson. But since he recently suffered a knockout loss, chances are he won't be getting a title shot anytime soon. So who's left? Rashad Evans? Cormier will smash him. The other big names, Glover Teixeira and Phil Davis, have recently suffered defeats or have left the promotion. That likely leaves Ryan Bader, who's on the best run he's had in the UFC since 2010. Although he's not been in title contention for a few years, his recent wins against guys like Phil Davis, and his self-marketing (including at Cormier's post-fight press conference), Bader might make the most sense.

The Bader fight could be the easy(ish) first defense Cormier has earned. Plus, it gives Cormier  more time with the belt, and maybe enough time for Jones to get his life in order. If Jones can't get his house in order quickly, he might not get it together at all. But given how favorably and lightly the justice system scolds athletes and celebrities, I won't be surprised if Jones gets off with a fine, community service, and mandatory drug counseling. If that's the case, the biggest grudge match in the UFC might be resumed by the beginning of next year. That could mean the UFC's biggest PPV event (unless Aldo vs McGregor takes the accolade). Under such scrutiny could Jones perform? Could he reach the finish line without another incident?

For now, all that matters is the Cormier is the new champ and that he earned his belt with as convincing a victory as anyone could have asked for.

One Reply to “UFC 187: A New Champion Rises, An Old Grudge Remerges”