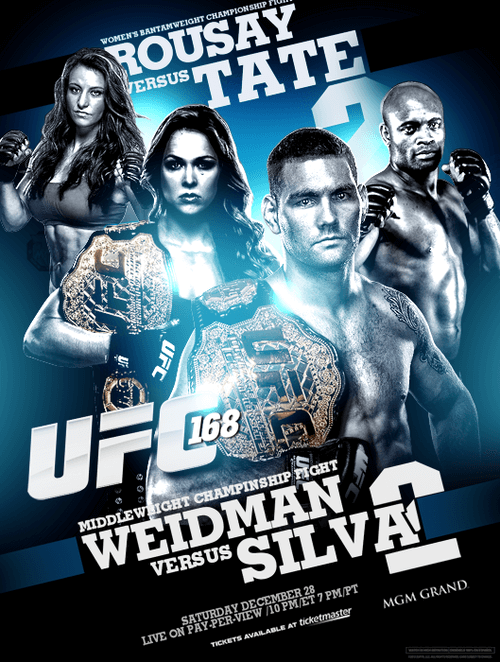 It's difficult to remember almost anything that occurred at UFC 168 before the shin-shattering moment where MMA fans around the world witnessed the end of Anderson Silva’s career. UFC 168 offered several memorable moments leading up to the main event, but they’re hard to recall and certainly pale in significance to what happened to Silva. The lone exception is the disrespect Ronda Rousey continued to shovel toward Miesha Tate, and more importantly, onto the burgeoning world of women’s MMA.

For the past several months, Rousey has made it her mission to cast herself as the villain of women’s MMA. The transformation from UFC darling to reviled champion was quick, dark, and ultimately well deserved. Throughout The Ultimate Fighting Championship 18, Rousey not only repeatedly flipped off Tate, often for no reason, but she also went out of her way to heap vitriol on her opponent-to-be and seemingly instigated skirmishes whenever and wherever she could.

Added to that, in interview after interview, Rousey referred to her team as “kids.” At least three of Rousey’s fighters were older than her—Jessica Rakoczy is ten years Rousey’s senior and a Boxing World Champion. The condescension in the diminutive use of the term kids is frustrating to many female fighters and martial artists in that it provides further evidence of Rousey’s dismissal of the women who built the female MMA platform that Rousey is now standing on. The term also just sounds ridiculous when you realize that one of Rousey’s fighters is not only seven years older than her, but also has 17 more fights than she does, including 6 more submissions.

That was all background going into the co-main event of UFC 168. Once the bell ringed, Tate threw caution, and strategy, out the window and recklessly attacked Rousey. Unlike her coaching style on TUF, Tate fought seemingly without a game plan. Instead of trying to keep the fight on her feet, Tate made lazy takedown attempts with ineffective foot sweeps and reached in for clinches that inevitably ended with spectacular hip tosses from Rousey. Despite her lack in planning, however, Tate survived the first round on grit and heart. Rousey showed that despite her time filming "The Expendables 3", she came in with more than enough cardio to keep pace with Tate.

After two rounds of the same uncontrolled attack by Tate, the ending was all but pre-ordained. Rousey threw Tate to the floor early in the third round and locked up her signature armbar. The tap came 58 seconds into the round. Tate got up and extended a hand in good sportsmanship. Rousey, continued her streak as a sore winner by turning her back on Tate and walking away.

Some will say that Rousey is nothing more, or less, than the female version of the Diaz brothers—a no nonsense shit-talking barrage of fighting spirit. They might add that the attacks on Rousey are unfair, and motivated by sexist double standards. And for some people, that might be right. But if we look at the career trajectory of both Diaz brothers, there are obvious and stark contrasts that seem to reveal something else might be underway. Unlike the Diaz brothers, Rousey is a young pup in the MMA world. The brothers have each fought more than 25 times, Nick almost 40, garnering a following for their rough-and-tumble attitude in and out of the ring. Despite that following, time and again they’ve been officially and unofficially sanctioned for their behavior--often reminded that they had to learn to "play the game." Rousey on the other hand, has nowhere near the following of the Diaz brothers and rather than sanction her, she’s received tacit approval for her behavior and much support from the UFC than the Diaz brother can even dream of. Thus, while some might see sexism in criticism of Rousey’s attitude, others might see a form of patriarchy in allowing Rousey to get away with how she acts. In other words, men (Diaz brothers) can’t act with the same disdain for the basic rules of sportsmanship because it's too aggressive, too reminiscent of the seedy underground beginning of MMA, and vulgar street fighting. An attractive woman, however, can show the same disrespect because the sexy Amazon warrior is a trope that sells (remember Xena Warrior Princess?). Or maybe it's allowed because the image of temperamental/hysterical woman is as stereotypically gender normative as the image of the doting housewife.  Whatever the case might be, Rousey’s unwillingness to shake Tate’s hand feels wrong.

The ending of UFC 168 was ultimately tragic and unsatisfying. The rematch between Anderson Silva and Chris Weidman offered many opportunities and possibilities. It was Weidman’s opportunity to legitimize his knockout victory against Silva in their first fight. It was the former champion’s opportunity to reclaim his belt and add an exclamation point to his hall-of-fame career. Alas neither of these things happened.

Weidman dominated the first round with his patience, his control of distance, and persistence. He took Silva down, got in some effective ground and pound, and nearly knocked out out Silva with a right hook to the ear. In that round Weidmanat least showed that he wasn’t a total fluke. For a fighter as young as he is, Weidman fought with a level composure and skill beyond his years. But credentials are not verified in a single round.

The second round started as commonly as any other, but ended in a way only one other fight in UFC history ever has, with a broken leg due to leg block. In their first fight, Silva effectively leg kicked Weidman, prompting many to think that had the fight gone longer, Weidman might not have been able to walk afterward. In true championship form, however, Weidman worked on his obvious weakness in the lead up to the rematch. So when Silva unleashed one of his deadly leg kicks, Weidman defended by checking the kick with his knee, causing the most shocking few seconds in MMA history. Silva’s shin snapped on impact and wrapped around Weidman’s leg, like a cartoon coming to life. The fight ended immediately.

Weidman remains the champion but will likely forever be denied the satisfying victory he and others wanted. We must give credit to Weidman for learning to check a leg properly, but given that broken legs are freakishly rare, his victory, like the first, is marred with an asterisk.

At 38, it’s highly unlikely that Silva will recover sufficiently from the broken leg to return to the cage, much less in any form resembling the awe-inspiring aura he once carried with him into every fight. It was a tragic ending to a storied career, but perhaps one better than the fate that befalls many great champions, who lose the sheen of their greatness to Father Time.

With Silva out of the picture, the Middleweight division drastically changes. If he had won the #1 challenger (Vitor Belfort) would have been a guy he already knocked out with a single kick, the #2 challenger (Ronaldo 'Jacare' Souza) is a teammate. With Weidman at the helm of the middleweight division, the fight possibilities become more interesting. I’d like Weidman to stop the testosterone-fueled comeback of Vitor Belfort, only so that we can see what will undoubtedly be a memorable fight between Weidman and Souza. But there will be plenty of time for talk about those fights. For now, take a minute and remember the greatness of Anderson “The Spider” Silva. He brought more than dominance to the world of MMA--he brought style and flair. There have been voice-boxes like Chael Sonnen and Jason "Mayhem" Miller since the early days of MMA. Those elements will only increase if the UFC decides to walk closer toward the bombast of W.W.E., instead of embracing the substance and quality of fighters like Ben Asken. But true showmanship inside the cage is rarer and ultimately, never seemed possible until The Spider showed the world that the impossible is the goal that champions seek and all-time greats achieve. We'll miss you, Anderson.

One Reply to “UFC 168: The Shock Of Defeat And The Gall Of Victory”