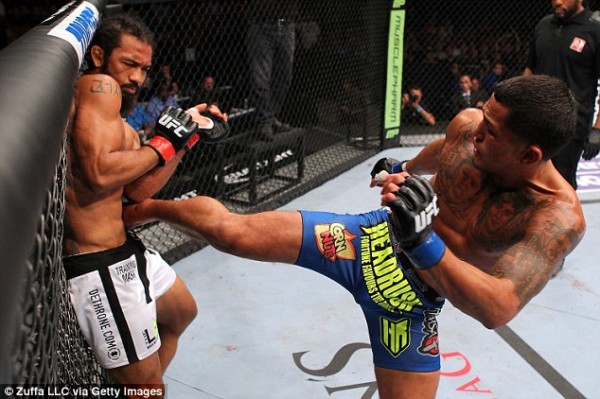 After UFC 164, there's a new UFC Lightweight champion, and his name is Anthony “Showtime” Pettis. Three years ago he took Benson “Smooth” Henderson's WEC title in the waning seconds of a five-round fight with the now infamous "Showtime kick" that looked like a ninja had been unleashed into the cage. This time it only took about 4 minutes for Pettis to get the job done.

Henderson's official nickname might be Smooth, but if you talk to the guys who've grappled with him then you'd know he's often called Gumby. Why? Because it is as if Henderson’s got two joints where there should only be one; his muscles and ligaments stretch farther than what seems humanly possible. Because of that, Henderson hasn’t been submitted in six years!

On Saturday night, however, Pettis lived up to his moniker by beating Henderson in the most unexpected of ways: by first-round submission. Pettis turned Henderson’s menacing blows from the top position into an arm bar, and Gumby, try as he might, couldn't find a way out.

Unlike most of Henderson's title defenses, the night ended decisively. With the exception of his win against Nate Diaz, Henderson was lucky to come away with decision victories against Gilbert Melendez and Frankie Edgar twice. He was, without a doubt, the most disputed champion in the UFC. Now that he's had his title taken from him, he needs to take a serious look at his game because as good as he undoubtedly is, his champion status won't be there to make up the difference in a close fight anymore.

True to the new champ’s gritty nature, in the post-fight interview, Pettis offered Henderson the rubber match. Dana White killed the possibility of that happening when he got up to the podium for his own post-fight interview. What would make legions of UFC fans happy would be to give Pettis his other wish, to let him loose on Featherweight champion Jose Aldo.

In the past, Dana White has shown a reluctance to make cross-weight super-fights (e.g., Silva vs. GSP, Silva vs. Jones, etc.) so it was surprising to hear that he’s marked Pettis down as the next best option for Aldo. And Aldo? What’s he think of a showdown with Showtime? Of the fight he said, “I can fight Cain Velasquez if they want … It’s not up to me, I’m not the matchmaker. I want to fight, I’m here to fight. I train every day to destroy whoever they put in front of me. I’m not scared of anyone.”

Uncle Dana, “It’s TIME!” These fighters seem ready. Are you?