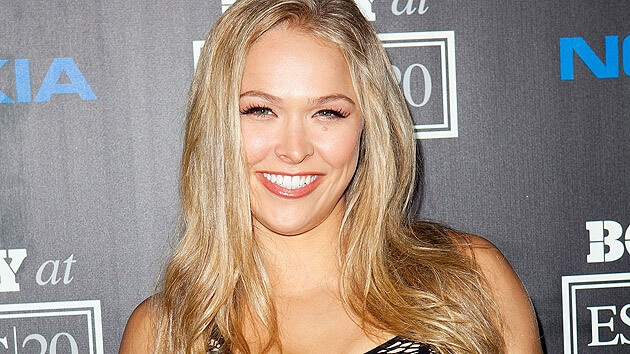 Ronda Rousey has quickly become not only the voice of women's MMA, but a substantial voice in MMA in general. She's not shy in using it, either. On Wednesday, Rousey dropped in to a radio interview on Power 106 FM and was asked if she could beat Floyd Mayweather inside the Octagon. She said she could and explained her strategy:

“I wouldn’t even stand up. I wouldn’t even be anywhere near him. I would just do like a little army crawl over there, and he would have to run away."

“I would just be skittering after him like the one dude in Bloodsport that was doing the whole monkey crawl fight system,” Rousey said. “I would do that. I would just bear crawl over there too low for him to hit me, and I’d tackle him down … I spent a lot of time [on the ground], and I doubt that he does.”

Now, I don't want to make too much of this. Rousey is less than modest when it comes to her skills. In fact, that's a key component of her dominance. If she believes she is anything less than the best, that she is beatable, she inches closer to failure. Rousey isn't trained to concede anything.

And yes, if she got Mayweather to go to the ground maybe she could get him to tap with use of her diabolical arm bar.

But that's a big if. Her plan assumes that a referee would allow her to drop immediately to the ground and crawl around. All Mayweather would have to do is back away. At that point the ref would stand Rousey up, and a fair fight would resume.

There are a lot of good fighters male and female that Rousey could beat. But saying you could beat Mayweather by executing a bizarre and unlikely plan is admitting you can't beat him.

I could beat Usain Bolt in a race if he tripped twice on his shoe lace along the way and the finish line was only 20 meters away. I could outswim Michael Phelps if he had to wear every piece of clothing in his wardrobe as well as all of his medals during the duel. I could beat the Scripps National Spelling Bee champion at Scrabble if he or she couldn't use vowels.