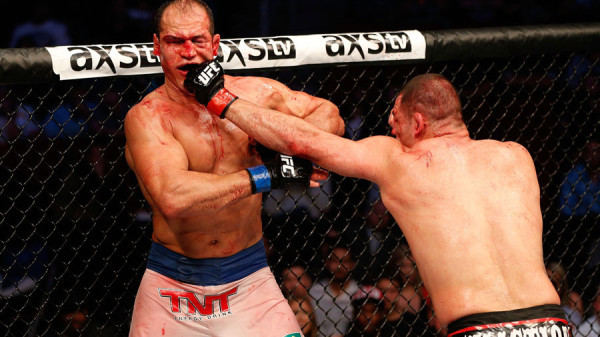 From the nosebleeds seats of the Toyota Center in Houston, the main event of UFC 166 probably looked like a replay of the second Cain Velasquez v. Junior Dos Santos fight.  If you paid close attention, however, you probably noticed some subtle differences—the most notable being Dos Santos’ improved takedown defense. That was without a doubt due to the help of the Russian Wrestling Olympian Dos Santos brought into his training camp. In the end though, it wasn’t anywhere near enough.

Everyone knew what the game was for both fighters on Saturday. Velasquez would smother Dos Santos, come forward and never stop, always on the look out for a takedown. Dos Santos would try to stay on his feet where either hand could end the night. But knowing what has to be done is very different from getting it done.

Dos Santos found ways to stuff some of Velasquez’s takedowns but couldn’t find a way to match his pace or create the space to land one of his signature punches. He was in the fight with only a puncher’s chance, and then, barely even that, as Dos Santos seemed out on his feet in parts of the third and fourth rounds.

Who’s next for the Heavyweight champ? Dana White says its likely Fabrício Werdum—the two-time Brazilian jui-jitsu world champion, and two-time Abu Dhabi World Heavyweight champ. With such an expert grappler as Werdum, Velaquez is very likely to want to keep the fight on his feet. And being the wrestler, Velasquez has the skills to keep the fight there. Why?  Because as I noted and explained in detail elsewhere, jiu-jitsu guys have rather mediocre takedowns when compared with wrestlers.  My bet is that Velasquez uses his mauling style and prodigious cardio to beat Werdum down. But what happens when someone like Jon Jones finally makes the leap into the heavyweight ranks? How will Velasquez handle a wrestler of his own ilk, who also has the length, and superlative striking abilities, to keep Velasquez at a distance? MMA fans must sit and wait to find out. Hopefully, not for too long.