Anything can happen in MMA, and sometimes the endless variables involved in a fight can lead to disastrous results.

6ft 4 lightweight Corey Hill was first introduced to MMA audiences thanks to his time as a castmate on the fifth season of The Ultimate Fighter. Hill had lied about his combat sports experience in order to get on the show, claiming a 10-0 record in MMA when in reality he had fought just once professionally prior to entering. Hill used his physical gifts to his advantage however and reached the quarter-finals of the tournament before losing to eventual winner Nate Diaz.

Despite his elimination, Hill had demonstrated huge potential during his time on TUF and made his way into the UFC. After going 1-1 in his first two trips to the Octagon, Hill faced off against Dale Hartt at UFC Fight Night 16.

After a back and forth first round, Hill came out aggressively in the second frame, attempting to use his length to attack Hartt from range. Then, an errant leg kick from Hill was checked against Hartt’s knee causing Hill to collapse to the floor.

Unlike other leg breaks in MMA, the extent of the injury wasn’t immediately obvious, and it was only when Hartt stepped back when it became clear that Hill’s leg had been snapped in half.

Antônio Rodrigo ‘Minotauro’ Nogueira earned a reputation during the early days of MMA as one of the most dangerous submission specialists ever to grace the heavyweight division. Minotauro was widely regarded as the second-best heavyweight in the sport for much of the early 2000s, second only to the man he had a legendary rivalry with, PRIDE Heavyweight Champion, Fedor Emelianenko.

After the sale of PRIDE, Nogueria would make his way to the UFC, and while it was clear that time had diminished the athletic gifts the Brazilian once had possessed, his technical nous was still enough to win a UFC Interim Heavyweight Championship.

So, when Nogueria rematched Frank Mir after the American had emerged victorious in a closely contested first fight, fans were excited to see two of the greatest submission artists in the history of combat sports go at it.

Nogueira got the upper hand early and looked close to finishing his opponent with an Anaconda choke in the first round. Mir was resilient though and locked in a Kimura that Big Nog refused to tap to, leading to one of the most gruesome finishes in UFC history.

Rarely does a catastrophic injury go completely unnoticed for the entire duration of a fight. However, adrenaline is one hell of a hormone, and Jon Jones is not any regular fighter.

After coaching The Ultimate Fighter against perennial contender Chael Sonnen, Jones seemingly set up establishing his sporting dominance by beating the American Gangster at his own game. Jones immediately took the fight to Sonnen, dominating the fight in the clinch, and forcing the decorated amateur wrestler to the mat.

Jones would go on to land some devastating ground and pound that forced the referee to call the fight off in the first round. Jones celebrated as normal, and it was only when he began his interview with UFC commentator Joe Rogan that it was clear something was amiss.

A video replay revealed that when Jones was forcing his opponent against the cage, his big toe had completely snapped under the pressure.

The horror in Jones’ face when he finally realises the full extent of the injury is enough to justify the injury’s place on this list.

Though more recent MMA fans may only know the Spider for his disappointing later career, those who saw Anderson Silva fight in his prime can attest to just how incredible the Brazilian was inside the Octagon.

A terrifying mix of world-class striking and an underrated submission game, Silva was rarely even challenged as he established an unprecedented run of dominance in the UFC’s middleweight division.

Silva’s undefeated run in the UFC would come to an end in 2013 when he was defeated by Chris Weidman in what was one of the most stunning knockouts in the history of the sport. And yet, despite how shocking the main event of UFC 162 was, Silva and Weidman’s rematch at UFC 168 would be even more unexpected.

After Weidman once again got off to a great start by utilising his wrestling to pressure Silva, the Brazilian came out in the second round aggressively. However, Weidman was prepared for Silva’s leg kicks this time around, and after checking one of Silva’s kicks, the Spider’s leg snapped completely in half.

Seeing one of the most dominant champions in UFC history writhing in agony on the mat was an entirely surreal experience for everyone watching.

Those who believe in karma would probably tell you that some supernatural forces were at play when Chris Weidman faced off against the man once called “the next Anderson Silva” Uriah Hall at UFC 261.

However, the much more likely explanation is that, even in a sport with seemingly endless possibilities, lightning can apparently strike twice in the most ironic of ways.

When Hall and Weidman stepped into the Octagon, many believed that it marked both fighters’ last chance to be able to make a meaningful run up the middleweight division towards the title.

Unfortunately, the fight would not play out the way that fans were hoping for. Instead, Weidman threw a full-power leg kick as his very first strike of the fight, which appeared to land cleanly on Hall’s knee.

However, as the former UFC Middleweight Champion went to regain his footing it became clear that something had gone very wrong. The bone in Weidman’s leg had been snapped so viciously, that exit wounds visible on his calf where the snapped bone had penetrated his skin.

Chris Weidman And The 5 Most Horrific Injuries in UFC History 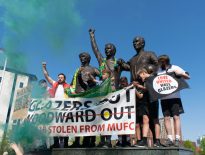 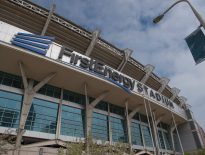