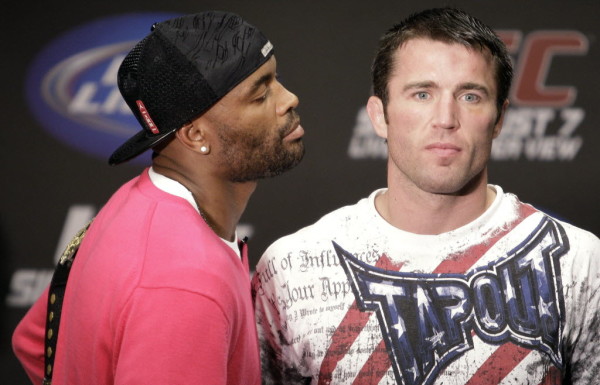 Chael Sonnen has nine lives. He loses fights, loses court battles and gets suspended by The California State Athletic Commission, yet he is still one of the most popular and recognizable figures in MMA. Because of that, he was recently given a sweartheart deal: face Vitor Belfort at UFC 175 instead of Wanderlei Silva, who was removed from the card after failing a random drug test. Oh, and get this, the fight will be at 205 lbs. (the light heavyweight division), but if he Sonnen wins, he steps to the head of the middleweight division, becoming the number one challenger and next up for a title shot (his third!). What could possibly go wrong?

How about another failed drug test? Apparently, the news just came in per ESPN that Sonnen failed a random drug test, testing positive for clomiphene and Anastrozole. Both drugs are associated with Testosterone Replacement Therapy (TRT)

The substances Sonnen tested positive for are classified as antiestrogenic. Anastrozole is used to treat early stages of breast cancer. Clomiphene is used in cases of female infertility. Sonnen likely will face a suspension in the wake of the test. Sources indicate to ESPN.com that he will not file an appeal.

The immediate impact of the failed drug test is that the UFC is forced to pull him from UFC 175. But will Sonnen be able to survive this latest scandal otherwise? Only time will tell. But what's for sure is that in the fight game, and especially for Uncle Dana (White), dollars makes sense. So even if Sonnen becomes permanently banned from fighting in Nevada — where exemptions for TRT are no longer granted — it is highly unlikely he'll be fired from the UFC. That would mean letting loose a reliable money maker. In fact, the only change might be that Sonnen's future fights are held in Brazil, where the laws governing TRT are much more in favor of supercharged fighters.

Somewhere, Anderson Silva's hearing about all of this with a shit-eating grin on his face.