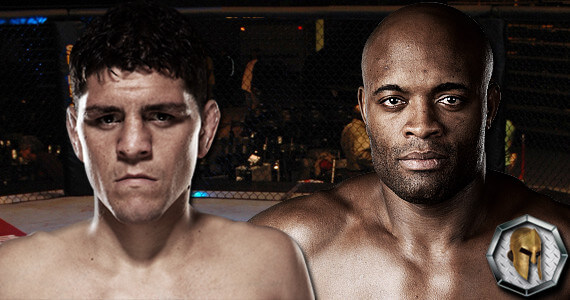 What was once just a joke and a dream is now a reality. Anderson Silva will face Nick Diaz at UFC 183, Super Bowl weekend, on January 31, 2015. Dana White broke the news on ESPN’s SportsCenter and via Twitter. It's a stylistic matchup that both fighters are sure to love and is the closest thing to a super fight that the UFC has delivered.

MMA fans the world over should be jumping with glee at this fight, but to properly enjoy it, you've got to understand not just how these fighters' styles are likely to mesh, but also the context in which the matchup was made. Yes, Silva vs. Diaz is definitely a super fight. It brings together two elite talents who've been thoroughly tested, impressed fans and done so at different weight classes. In these men, style and popularity meet substance. That's a super fight. But, and this is a big but, it's the ugly duckling of the super fights that fans have been clamoring for.

For the past several years, as certain fighters have continued to dominate, fans have been asking to see what happens when these standout fighters face each other. Anderson Silva vs. Georges St. Pierre is the MMA world's version of Floyd Mayweather vs. Manny Pacquiao. At the height of their reigns, before Silva got knocked out, before St. Pierre's run was thoroughly tainted by Johny Hendricks, a fight between Silva and St. Pierre would have yielded the biggest PPV numbers the UFC had ever seen. In truth, that fight might have even rivaled some of the top boxing PPV numbers. The opportunity for that fight came and went. The same goes for Silva vs. Jon Jones and Jose Aldo vs. Benson Henderson. There's still a chance for Jones vs. Cain Velasquez and Aldo vs. Anthony Pettis, but the likelihood of these fights ever materializing is slim.

Part of the reason is that the UFC has been especially reluctant to allow champions to compete for titles, or at all, in other weight classes. Silva fought in two non-title fights at light heavyweight while he was the UFC middleweight champion (against Forrest Griffin and Stephan Bonnar), but that is certainly an anomaly.

With the exception of Georges St. Pierre, who on multiple occasions expressed a reluctance to face Silva, most fighters seem willing, if not downright eager, for super fights. For these guys, such fights are not only an opportunity to grow their glory, but to cash in on endorsement deals and advertising from companies that recognize the significant marketing potential of such events.

So why aren’t these fights getting made? The clear and final answer is really only known to Dana White, but it likely has something to do with brand control. The UFC is hyper protective of its brand, part of which is built by drawing stark contrasts with the shortcomings of boxing. For example, critics often say, there are so many belts in boxing it’s hard to know who the champion is. In the UFC, however, it's quite clear who the champ is. Only after a champion is out of commission for an exceedingly long time does the UFC even entertain the idea of an interim champion, as it did when Dominick Cruz and Georges St. Pierre were injured. Maybe part of the reason more super fights don’t happen is because the UFC wants to keep its championship lineage clear. Not a great reason, but an understandable one.

This view, however, flies in the face of another tenant of the UFC brand: UFC gives fans the fights they want to see, unlike in boxing where the various promoters avoid matching up their top guys against any real threats. It would be hard for the UFC brass to say that fans haven’t been demanding the super fights listed above with Silva, St. Pierre, Jones, Aldo, Henderson and Pettis. And yet, that isn’t, or hasn’t been, enough. Maybe the UFC has been protecting the marketability of its champions by not tainting them with a loss against another champion. That would be a terrible rationale for avoiding super fight, but not an unlikely one.

Given the UFC’s reluctance to make these super fights, fans are rightfully excited by Silva vs. Diaz. The fight shouldn't signal to fans, however, that the UFC is necessarily changing course on its outlook for such matchups — actually, I highly doubt that it will do that anytime soon. Rather, the stars just perfectly aligned to make this fight possible.

Silva could not come back from his broken leg to fight an unknown. Not only would fans likely buck at having to pay serious cash to see Silva beat an unknown contender, but Silva himself probably wouldn’t want that. He’s always craved challenges, and Diaz certainly offers that.

From Diaz’s side of the equation, he’s been looking for bigger paydays and ways to jump to the head of line for title shots. Unless he got that, he seemed quite happy to stay off the UFC shelf, with the exception of maybe planning a fight against Roy Jones Jr. A fight against Silva doesn't get him a title, but it will certainly put him in title talks if he wins and will undoubtedly mean a significant payday.

By making the fight, the UFC has two big-name headliners for its PPV card on Super Bowl weekend without sacrificing the purity of its championship lines. Moreover, the styles of both fighters virtually ensure fireworks.

Nick Diaz is a MMA-style boxer with a Brazilian jiu-jitsu black belt under Cesar Gracie. His come-forward style has delivered several toe-to-toe brawls packed with excitement.

Silva, the greatest of all time, is easily the most accurate and lethal striker to ever step into the cage. He’s the only fighter in MMA to ever make the sport look pretty. There have been other dominant fighters — Jon Jones, Fedor Emelianenko, Georges St. Pierre, Royce Gracie — but none of them have transcended their victories into art. Silva is MMA’s Roy Jones Jr., its Muhammad Ali, its Sugar Ray Robinson. Where other fighters might just win, Silva entertains, shocks, inspires and makes you believe that amid all the violence there is space for genius.

“Genius is not a gift, but the way a person invents in desperate circumstances.” - John Paul Sartre

Given both Silva's and Diaz’s trials and tribulations with wrestlers, you can bet that neither man will be taking any double-leg tackles in this fight. They’re going to stand, punch, kick, elbow and knee until one man can’t take any more. Whether it’s the bad-ass from Stockton or the legend looking for a second life, MMA fans will gladly pay for the privilege to watch.